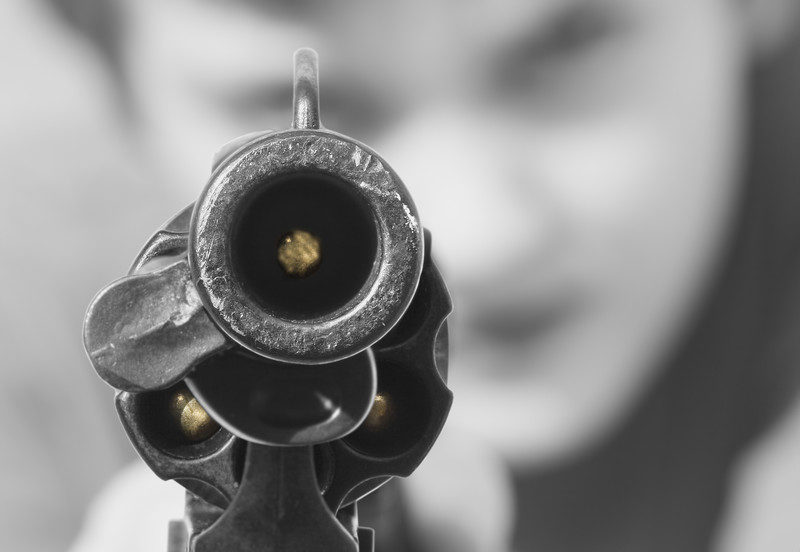 Confidential sources inside HOB (Key West’s Middle School) told The Blue Paper that a student was reported for having made very explicit death threats but that no action was taken. That student, they claimed, benefited from special protection, both from school administrators and from KWPD. The Blue Paper obtained a screen grab of an image showing the student pointing a gun at the camera; a caption read: “[I’m] gonna bust a cap in yah head.”

From there the story turned into a rollercoaster ride.

School District officials claimed school administrators, KWPD, and MCSO had worked together on a “full investigation.” But after a nearly 4-week probe conducted by The Blue Paper, it turns out none of that was true.

First KWPD was unable to provide any proof of an investigation, then they claimed that the Monroe County Sheriff’s Office had taken over the investigation at the time and that a “full report was available at the Sheriff’s office”. 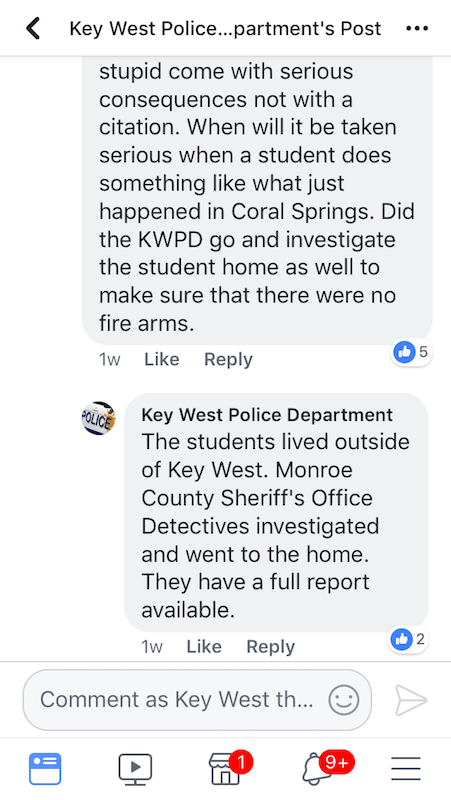 When no such report could be found in MCSO files, KWPD claimed the facts regarding the HOB incident were “mistakenly” crisscrossed with another incident that had been fully investigated by MCSO and had involved students attending a different school. [The very KWHS theater prop-gun story we had already written about in our article…]

In the midst of the confusion State Attorney, Dennis Ward, opened his own investigation. [That investigation is ongoing.]

Finally, we learned, from sources inside KWPD, that Chief Donie Lee was furious at having been lied to by the HOB School Resource Officer and that he fired him for being disingenuous and for embarrassing the Department. [UPDATE Monday 2/26/2018: KWPD spokesperson Alyson Crean confirmed today that the School Resource Officer, David Hall, “is on paid administrative leave pending a predetermination meeting in regards to the proposed discipline.”]

If our information is correct, it seems that Chief Lee took direct action to address the breakdown involving the HOB gun threat incident. It is unclear, however, why there is still, apparently, no investigation of the student’s alleged criminal behavior by KWPD. [Chris Weber, Chief Investigator for the State Attorney’s office is the one conducting an investigation into the gun threat itself.] [UPDATE Monday 2/26/2018 KWPD spokesperson Alyson Crean stated the reason KWPD did not conduct a follow up investigation into the alleged gun threat involving HOB students is because “the State Attorney’s Office had initiated one last week.”

The School District, on the other hand, is making only very limited efforts towards transparency. They did send out a press release yesterday listing over a half-dozen recent threats made by students in Monroe County schools and relating some information on the actions taken. Still, the District makes no mention of the particular HOB incident in question.

It is easy to understand HOB parents’ and teachers’ frustration.

At about the same time that the HOB student sent the “gonna bust a cap in yah head” gun threat to a fellow student, another HOB student brought a plastic toy gun to school. It was described as an orange K-Mart style plastic toy by our source. That student was reportedly issued a KWPD citation, expelled, and forced into an alternative education program (which pretty much means his chances for any high-level academic achievement may be over.)

Last Saturday 19-year-old Duviel Gonzalez, a former Marathon High School student, was arrested on felony charges for posting photographs and threats aimed at Marathon High on Instagram, including the reposting of the “Florida Round 2” gun threat which some attribute to Russian fake news warfare.

Yet the “gonna bust a cap in yah head” student was not investigated or disciplined and is still attending the school.

We learned this week that some parents have now made direct complaints to the FBI and the State Attorney’s Office. One such parent claims that the student involved in the gun threat at HOB is also allegedly dealing drugs at school, together with his brother and his cousin, and that the sales take place on campus as well as at the student’s parent’s home and at his grandmother’s home. This same parent claims the complaint about drug dealing was originally made months ago directly to the HOB School Resource Officer. According to the parent, the student was allegedly found with drugs in his possession yet he was not cited by the officer or meaningfully disciplined by school administrators.

HOB Principal, Christina McPherson, still claims that “all protocols were followed” in the HOB gun threat incident but she has failed to make those “protocols” public. [She initially claimed they “could not be shared”.] Does the District even have a policy regarding the identification, supervision, and support of red-flagged students? Is there access to a psychologist with the appropriate expertise to help such students? What information about such threats should be disclosed to parents, faculty, the public and what should remain confidential?

On February 19th, the District finally acknowledged that the “protocols and policies” in question are public records and responded to our February 9th public records request. We were informed that we “will be advised” as to how much it’ll cost us and that “payment will be due in advance.” None of our specific questions have been acknowledged or answered.

At this point it appears that School District administrators are still trying to cover up the facts. And we still have not received a copy of the so-called “protocols and policies.” Do they even exist?

Neither the HOB Principal nor the Monroe County School District have issued a correction to their notes to parents or press releases claiming that the HOB gun threat incident was “thoroughly investigated” and, according to our sources, Principal McPherson has since placed a “gag order” on her staff and HOB top administrators have reportedly been mostly focused on uncovering just who is “leaking information to the Blue Rag”.

Discipline and law enforcement at HOB has been capricious and dysfunctional and entangled in favoritism and maybe even racial prejudice. One parent commented on social media, stating that the student who brought the orange plastic toy gun was a black child and was expelled, while the other student [a well-connected white child] was not disciplined at all. In Florida bringing a plastic toy gun to school is not a crime whereas sending a threat to kill someone using electronic communication is a felony of the second degree.