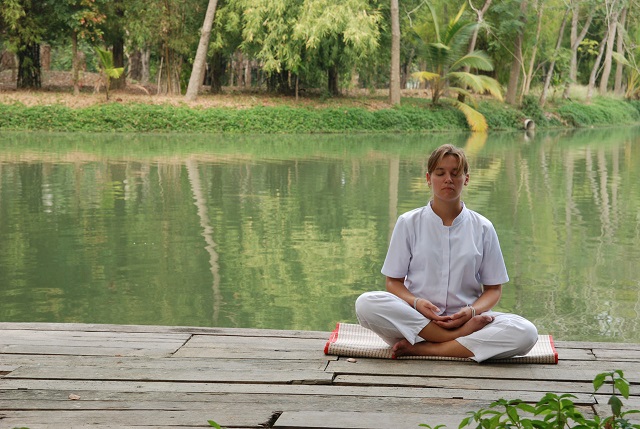 Photo from “publicdomainpictures.net” entitled “Meditation By The Lake”, taken by Nat Sakunworarat.

The pulsating life force within all creation reverberates on a continuum at set frequencies. These varying modulations present a vibration that’s delusively manifested in the material world as distinct “solid forms”. This illusion reinforced by our sensory experiences is a compelling optical deception exerting a powerful influence over our lives.

This hoax once complete and accepted, sets in motion an alluring and farcical force purporting to be “Reality”. It births every manner of ignorance and misrepresentation.

Thus, a precedent setting pattern for all that follows is inherently established in our beings. Upon this flawed foundational fissure, fiction and fabrication are set as the “standardized norm” from which we analytically reason, think, evaluate and experience the world.

Stuck in the muddy realm of materialism, unable to gain traction and realize the need to authenticate our “Reality and Self”; many fall prey to societies’ psychobabble, wordy gobbledygook and politically correct narratives; proffered with their quaint judgments and recommended punishments for those unwilling to concede their beliefs.

The sum total of this “tragic play” diminishes and eventually extinguishes our spiritual spark and yearning for the “Light”. Confusion and discontent sets in, as many resign themselves to a life of quiet desperation.

These setbacks influence and take shape in the form of an “educational system” that in all too many instances has taken on the role of a “babysitter”.

Marketing a flawed product has become a full time job for many entrenched educators. Parents, taxpayers and politicians must be kept content, so as not to disrupt the enormous flow of money to these institutions.

Unfortunately for most students, they’ve reaped the consequences of a failed  education that has been identified as a “Threat to National Security”.

The huge sums of taxpayer money being spent for inferior and second-rate school systems must somehow be concealed. These “government schools” must by hook or crook, pretend to be selling something of value to the public. Smooth talking and well rehearsed educational spokespersons have become adept at disseminating rhetoric capable of indoctrinating critics, while  keeping the money train on track.

Recycling disinformation as fact, while ignoring the Self-Realized and Self-Actualized principles capable of catapulting the world’s awareness and consciousness into uplifted dimensions of enlightenment; prevents our children and citizens from advancing forward and achieving their potential.

The critical mass for positive change has not yet been attained. Thus, a merry-go-round of madness, ignorance, anger and frustration continues to erupt and flow into society.

Shall this cyclic spell of ignorance ever be broken?

Ignoring the “scientific wisdom of the ages” will continue to subdue the spiritual clarification necessary to elevate one’s consciousness and awareness, so the internal states of joy and happiness we’re seeking remain obscure. Looking outside of ourselves towards people, places and things has not, nor will it ever bring to us what we’re seeking. Only when appropriate meditation techniques are taught and practiced, will we acquire  access to our “Internal Blissful State of Being”.

Looking to the material world, political parties, social movements and relationships to soothe and heal our hearts, minds, and spirits; will always be an empty,  painful and losing proposition.

Frustrated and discouraged by our disillusionment, we’ll eventually implode or lash out because of our discomfort; as we seek any means to distract and reduce the agony and suffering that has overtaken us. Finding ourselves in a weakened, unstable, vulnerable and toxic predicament; our trauma can increases and spiral out of control.

Clients I’ve worked with who habitually cut themselves (non-suicidal self injury) with sharp objects, did so for many reason. Some of them could no longer bear their emotional pain and shut down. Cutting was a way to stop feeling numb. And in some cases it served as an alternative outlet for their stress and emotional pain.

There is a hefty price to pay when we allow ourselves to be denigrated and  abused. Through our own ignorance and mistreatment, or that of societies’.

Whittling people down to  a shell of themselves; is the corrosive nature of chronic delusion and exploitation. The evil and harm stemming from such destruction has taken a heavy toll on humanity.

The answer is here. It lies within each of us. We can be the solution or an extension of the problem. Unfortunately, the luxury of time has run out. The impenetrable “Now” has arrived.

A question, from whence does the precisely synchronized energy, encapsulated in this orderly design of expression originate? The author and creative source of “it all”  did not “originate in a cipher”. From nothing, there can be nothing. We’re immutable, absolute images of this Creator.

Innately, inherently, birthed within each one of us is this “creative spirit and liberating guide” that will pilot us through the difficult times we face; if an effort is made to contact the Architect of the Cosmos.

As we know, part of every Creator, forever lies within Its Creation.

This “call to arms” must not go unnoticed, for if ignored our lives will cease to be a gift and opportunity; but rather take on all the machinations of a “curse to be endured”.