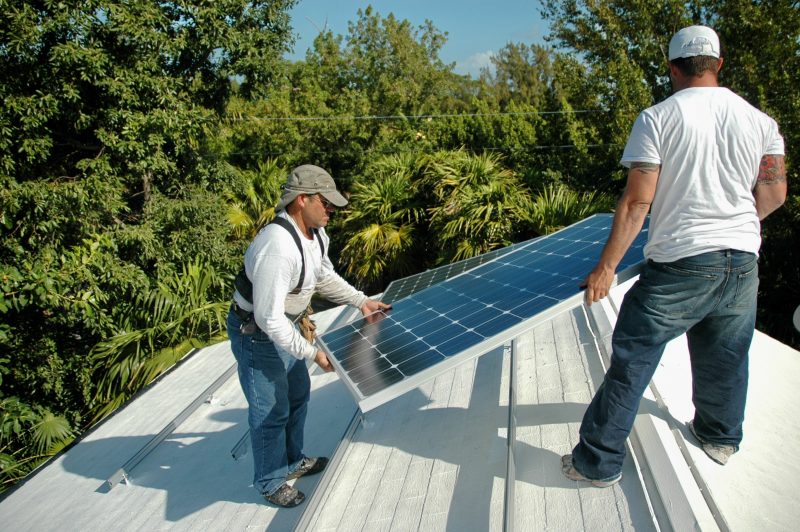 Those are the words of Florida Supreme Court Justice Barbara Pariente who wrote a strongly worded dissent back in March when Amendment 1 came up for approval by the court. She went on to call the proposal “a masquerade and a wolf in sheep’s clothing.”

Florida, North Carolina, Kentucky and Oklahoma are the only states that force solar consumers to buy their power from an electric utility. The large electric companies such as Florida Power and Light (FPL) and Duke Energy want to keep it that way.

As a result they have put forth an amendment titled the “Rights of Electricity Consumers Regarding Solar Energy Choice” that will be on the ballot in November in the form of Amendment 1. The title of the proposal obscures the fact that the statewide utilities are proposing to control how Floridians can use and install solar panels on their own properties.

FPL, Duke and Tampa Electric and some obscure PACs such as the 60 Plus Association are spending nearly $20 million to pass Amendment 1. Clearly the power companies really want it to pass.

There are 9 million electricity customers in the “Sunshine State,” but fewer than 12,000 rooftop solar systems. By comparison, New Jersey has over 43,000 rooftop solar systems with less than half the population and less sun. Worse yet, when it comes to jobs in solar, Florida has a fraction of the number it should, based on this state’s population.

Want to lease solar panels from a national provider instead of buying them? Forget it. Florida regulations that will be enshrined in the constitution forbid it. California has no such restrictions and, as a result, has more rooftop solar than any other state by far.

The language of the amendment sounds appealing and that – intentionally – confuses voters but it will not grant any new rights for Floridians.

The second sentence in the wording is where problems begin. Electric utility trade groups across the country say that consumers who opt to have solar energy for their homes disproportionately burden customers who do not have solar systems.

But there is no cost to the utilities when consumers choose to go solar. In fact, those who generate electricity on their rooftops help utilities by providing additional power to the electric grid at no cost at all to everyone else. Right now FPL is collecting money from rate payers to build a new nuclear plant at Turkey Point sometime in the future. Florida wouldn’t need that nuke if many more people installed solar and ratepayers would save money.

In a recent column in the Naples Daily News Neville Williams wrote,

“Here’s what Amendment No. 1 would do, if passed: Under the guise of stating that consumers will have the constitutional right to own or lease solar (they already have the right), the amendment would allow state and local government to impose all manner of fees and regulations on solar users to prevent ‘consumers who do not choose to install solar’ from subsidizing the ‘backup power and grid access to those who do.’ This is complete nonsense.”

He compared the effort by the utilities to that of the cigarette companies.

“The well-financed PR effort behind this ‘smart solar’ petition makes the ‘smoking-isn’t-harmful’ propagandists for the tobacco lobby look like amateurs.”

An unlikely coalition has formed to defeat Amendment 1. Libertarians and Republicans who have joined environmentalists in the “Vote No on 1” coalition said they signed on because they see the proposal expanding regulation and not benefiting the free market.

“Amendment 1 was never about increasing choice and energy production for consumers. It’s always been about tightening the chokehold the large power companies have on the people of Florida,” said Alexander Snitker, who represents the Liberty First PAC.

“I just find it extremely disappointing that Florida is ranked 17th currently in solar power generated,” Munz said. “We all benefit from the use of clean, safe and inexpensive energy and Amendment 1 will be making Florida less competitive.”

Another issue concerns what’s known as net metering. Those in the state who have solar panels or are considering installing them are worried that Amendment 1 will be used by power companies to eliminate Florida’s net metering rule that currently allows customers to get credit for generating solar power and sending their excess energy back to the grid. This policy is one important key to making the economics of solar work.

Amendment. 1 allows solar equipment leasing but not from a third party and forbids those companies from selling solar power to customers. The sale of that power is the basis for the solar revolution that has seen 1 million solar systems installed in the U.S. with another million expected to come online next year. If this deceptive initiative passes, Florida will never see the billions of dollars of investment capital that is chasing solar projects nationwide, creating thousands of jobs.

Florida Power & Light, Duke and Tampa Electric fear the exponential growth of distributed solar generation outside their control; they don’t want to lose revenues to solar. They want to keep the profits from sunshine for themselves and not pass the savings on to the public, nor allow independent solar companies to offer low-cost electricity.

As executive director of the Solar Education Association of the Florida Keys, I urge voters to stop the utilities from having a monopoly on the sun: Vote NO in NOvember on Amendment No. 1.