Are we pouring gasoline on one public health crisis hoping to treat another? Voters said no in Key Haven, Florida, to a trial release of genetically modified antibiotic-dependent mosquitoes in 2016. The analysis of FDA public comment by Bloss et al was a start to look at why. One significant factor was the impact of community physicians on the delay of the field trial.

Shortly after the close of the FDA public comment period, practicing physicians in the Key Haven, Florida area petitioned for safety data related to these genetically modified (GM) mosquitoes. They shared their concerns with the community (see petition below). 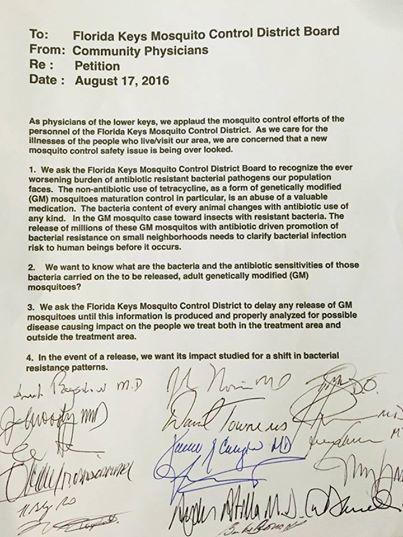 These GM insects are programmed to require tetracycline as a maturation factor. If they do not receive the antibiotic in sufficient dosage to penetrate every cell and neutralize the implanted lethal gene, the insects die in early larval stage. If they receive a sufficient dosage, they will live and reproduce.

The World Health Organization (WHO) estimates 700,000 people die each year from antibiotic resistant bacterial infections (see here, page 23). More than 30,000 women and 400,000 newborns die each year from infections around the time of birth. Most of these deaths occur in low-income countries, and the situation will only worsen as the antibiotics available for treating infections become less effective, owing to the emergence of antibiotic-resistant bacteria.

Community meetings were held after the FDA comment period where the answer to whether resistant bacteria were present was never disclosed. 14,700,000 GM insects would be released over 22 months on two populated island streets without regard to immunocompetence of inhabitants. Petitioners opposed release without bacterial resistance data on the adult, to-be-released GM insects and that data being factored into any possible release.

Barry Kreiswirth, PhD at PHRI/Rutgers University, offered his lab to genetically characterize resistance among the isolated microbes from the insect. Having a resistance genotype may provide an opportunity to track these changes among human isolates collected from both the test and control areas. In addition, one could also evaluate nasal swabs from volunteers from both test and control areas to observe changes in resistance among carriage strains.

Tracking antibiogram data for resistance changes pre- and post-release also was discussed in the release and non-release areas of the islands (see here and here). Antibiograms are tables that compare resistance percentages for tracked bacteria. The Health Services of the Cayman Islands very likely can produce this data for years before and follow years after the antibiotic-dependent, genetically modified insects initial release.

In 2009 and 2010, our community was sensitized to mosquito-borne illnesses by a Dengue outbreak. We appreciate the proposed benefit of this technology. We question the use of an antibiotic while neglecting that uses bacterial impact. Alexander Fleming called the misuser of antibiotics the “the ignorant man” in his 1945 Nobel Prize speech.

It is the petitioning physician’s opinion this data is required to make a risk benefit analysis of threat from bacterial resistance vs threat of mosquito-borne illnesses in the use of antibiotic-dependent, GM insects. Fore more information please contact Dr. John Norris at Keywesdoctor@gmail.com