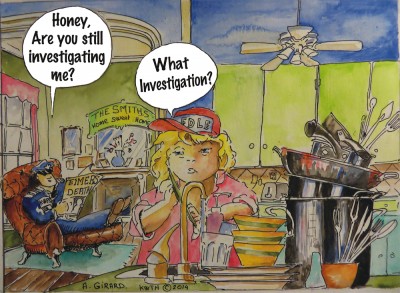 by Naja and Arnaud Girard……

A long awaited investigative report on a scandal that greatly tarnished both FDLE’s and KWPD’s image in the community is finally complete.

FDLE Special Agent Kathy Smith and her ex-husband, former KWPD Captain Scott Smith, could have been prosecuted for the criminal acts of perjury and mortgage fraud in connection with a $461,500 bank loan they’d obtained for a Big Coppitt home.

Could have… had the acts been discovered much sooner, that is.

It took over six months for FDLE investigators and Assistant State Attorney Mark Wilson to conduct what became pejoratively known as the ‘two-paper investigation.’

The Smiths had signed two loan documents claiming they were still married even though their divorce had been formalized more than four months prior.

“Of the documents in which Scott and Kathy Smith claimed to be married, the least ambiguous is the “Continuous Marriage Affidavit,” which they signed on March 3, 2010. This one-page document had a single purpose: to affirm they ‘were husband and wife at the time they acquired title to the above described property and that their marriage to each other has been continuous and uninterrupted up to and including March 03, 2010,’” wrote Wilson, “It is difficult to countenance that the Smiths were unaware of their marital status in March 2010. Divorce is typically distressing, unpleasant, and expensive and not something a person is likely to be confused about.”

Wilson concluded that the Smiths’ statement in the sworn affidavit of continuous marriage “was obviously false.”

Since then, the Smiths have apparently failed to keep up with the payments on the $461,500 loan they received in 2010 for the house they claim to have purchased for $132,500 in 2004. Both are now named in a foreclosure suit which was filed by Capital Bank last December.

The fact that these two high-profile law enforcement officials were caught-up in accusations of perjury and mortgage fraud was one of the bombshells that rocked Key West during the protracted investigation of thirteen KWPD officers who had been involved in the death of a tourist named Charles Eimers on Thanksgiving Day of 2013.

FDLE Special Agent Kathy Smith had been in charge of that “independent” investigation. But as disturbing allegations of cover-up began to accumulate, Agent Smith’s impartiality came into question more and more. Not only had her ex-husband and father of her child, KWPD Captain Scott Smith, been the one to call her that morning about investigating the police officers under his direct supervision, but it was also discovered that, even though FDLE had been called in to conduct an investigation immediately, Taser video and dashcam video involving the incident had never been preserved and came up missing or destroyed. Eyewitnesses had not been interrogated and a bystander cellphone video that ultimately demonstrated that several KWPD officers had lied under oath was never brought into evidence. The Horan law firm, representing the Eimers family, said at the time that it took no more than a 5-minute phone call to obtain that cellphone video. FDLE Agent Kathy Smith had had the same easy access to it all along.

FDLE top brass had been pressured early on about concerns over a conflict of interest but responded only by saying that they were confident that all “safeguards” were in place. Attorney Darren Horan, alarmed at FDLE’s handling of the investigation of his client’s death, conducted a little investigation of his own and discovered the perjury/mortgage documents.

Special Agent Kathy Smith has been on paid administrative leave since the third week of November 2014 when the investigation of suspected perjury and mortgage fraud was launched.

“Even if the actions of Scott and Kathy Smith were criminal in March 2010,“ wrote Wilson in his report, “they cannot be prosecuted because the relevant conduct occurred outside the period of limitation.”  [Two years for the perjury charge and three years for mortgage fraud.]

FDLE, however, indicated that their internal investigation is ongoing.

A burning question in the minds of many who have followed the Eimers case is whether and to what extent Agent Kathy Smith’s conflict of interest, due to her family ties with then KWPD Captain Scott Smith, had influenced her investigation of the Eimers’ in-custody death case.

One thing’s for sure, the record had all the appearances of a cover-up and, so far, none of the officers involved have been disciplined: Not for their apparent perjury, not for their mishandling of important evidence, and not for having chased away important eyewitnesses from the crime scene.

And, it can’t all be blamed on Kathy Smith.