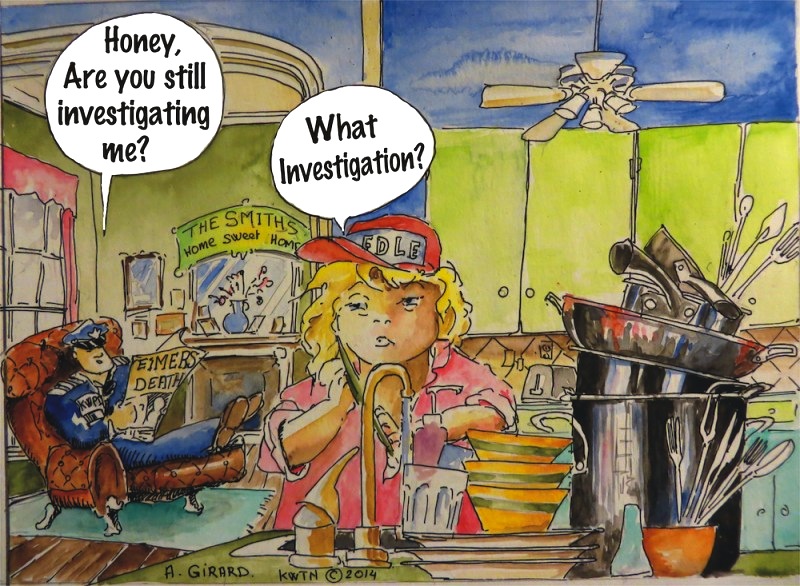 FDLE reprimanded Special Agent Kathy Smith with a 5-day suspension. Agent Smith was accused of having intentionally signed a false affidavit in order to secure a $461,000 bank loan.

Agent Smith became engulfed in controversy in 2014 while leading the investigation of the in-custody-death of 61-year old tourist, Charles Eimers. According to her critics, a serious conflict of interest had caused her to participate in a KWPD cover-up of Eimers’ death: Special Agent Kathy Smith was investigating officers who, on that fateful day, were under the direct supervision of KWPD Captain Scott Smith, her ex-husband and father of her child.

In spite of public indignation, FDLE steadfastly ignored the conflict of interest, even under direct questioning by CBS News investigators. When FDLE forwarded its conflict of interest policies to the media, it conveniently left out the one which speaks directly to the issue: Rule 7.1 of FDLE’s “Ethical Standards of Conduct,” reviewable on their website. It reads:

Finally, in November 2014, it was reported in The Blue Paper that Smith and her ex-husband Scott Smith were cozy enough to swear, under oath, that they were still married some four months after their divorce had become final. Special Agent Kathy Smith was escorted out of her FDLE office in disgrace and placed on paid administrative leave pending an investigation into perjury and mortgage fraud.

Even though the Smiths both refused to cooperate with the investigation, for Assistant State Attorney Mark Wilson, the case was pretty cut and dry. “Divorce is typically distressing, unpleasant, and expensive, and not something a person is likely to be confused about,” wrote Wilson in his report on the alleged perjury. He concluded that although it appeared there was probable cause to prosecute the Smiths, the statute of limitations [2 years] had run out.

The mortgage application had allowed the Smiths to borrow $461,000 on a house they claimed to have purchased for $132,500. They were now threatened with foreclosure. However, the alleged perjury could no longer have any criminal repercussions. Many expected that FDLE’s internal affairs investigation would lead to serious sanctions against Kathy Smith. She received a 5-day suspension.

“That’s it!?” asked Citizen Review Board member Tom Milone, “She signs a false affidavit under oath, and she gets no more than a five day suspension?”

“She got off on a technicality,” says Darren Horan, who represented the Eimers family and discovered the records showing a conflict between divorce papers and the mortgage affidavit.

So, can she still testify in court? Will jurors listen to her and be expected to believe what she says or is the perjury issue always going to discredit her story?

Before we get into all that, let’s recall briefly how Special Agent Kathy Smith’s credibility was first brought into question:

It was 8:30 am on Thanksgiving morning, 2013. On South Beach, at the end of Duval Street, police officers were struggling to hand-cuff a man when they suddenly realized he had stopped breathing. He was hauled away in an ambulance. By 9:00 am, it was clear that the man, Charles Eimers, would never leave the hospital alive. KWPD switched to damage control.

One of the men of the hour was Sergeant Pablo Rodriguez. At the time, lawyers were defending Rodriguez in a lawsuit that would eventually cost the City nearly $300,000 to settle. He’d been accused by a fellow officer of having ordered the destruction of a dashcam recording showing use of excessive force.

Rodriguez was immediately put in charge of collecting evidence.

Someone had to call FDLE. (FDLE is the agency in charge of investigating all KWPD serious injury or death-in-custody cases.) KWPD Captain Scott Smith made the call and he called none other than FDLE Special Agent Kathy Smith, his ex-wife and mother of his child.

Kathy would take the lead in the investigation, applying FDLE’s ‘outstanding investigative techniques.’

This is how FDLE describes its mission to the public:

In fact, Kathy Smith would conveniently fail to take control of the evidence and in short order video and audio recordings were erased or butchered and witnesses were lost.

The investigation was far from “state of the art.”

It took months for Eimers’ family’s attorneys to find independent cell phone video, but when it became public, it showed KWPD Officer Henry Delvalle chasing witnesses away. Officer Kathyann Wanciak, an eyewitness said, had threatened to arrest another group of witnesses.

Police dispatch [CAD] audio files were cut to remove the part about the use of a Taser, which the Department claims was never fired, but somehow the note regarding Taser use was left in the written CAD report. The Taser video was incomplete, apparently erased, but not far enough to take away comments made later by officer Gary Lee Lovette who said things like, “We might as well just bury him,” “We just killed someone,” and “I dropped like a fucking bomb on his head.”

Kathy Smith was in charge of this whole circus; the crime scene belonged to FDLE. South Beach restaurant employees and other witnesses claimed FDLE failed to return their repeated phone calls. Credit card slips were never examined to find those lost witnesses. Under Smith’s supervision Eimers’ body was nearly cremated before autopsy.

Special Agent Kathy Smith had the phone number of a Columbian tourist who had taken video of the incident, but she never contacted her. When the video finally surfaced several months later thanks to Eimers’ family’s attorneys, many of the officers found themselves caught in a lie.

Officer Randal Hartel, who claimed he was somewhere else at the time Eimers lost consciousness, was clearly identified on scene in the video. Worse, there was Eimers with his face covered in sand and bleeding from the ear. Officer Nicholas Galbo and others had sworn Eimers had never had any sand on his face.

Smith, who according to the medical examiner (ME), was his only source of information, informed the ME that Eimers had not been facedown in the sand and that he had been able to speak during the entire incident. Relying on what clearly appeared later to be false information, the ME concluded that Eimers could not have been smothered in the sand on South Beach and that he must have died of sudden cardiac arrest.

FDLE’s incomplete investigation was used to neutralize the grand jury that gathered to look into Eimers’ death.

The US Justice Department is currently conducting their own investigation into Eimers’ death and the FDLE “investigation” that followed.

“Police officers should not lie,” said Milone, outraged at the 5-day suspension. “If they lie they should be dismissed or asked to resign.”

So, can Special Agent Kathy Smith still do her job? Can she testify in court? “Technically yes,” says Horan, “She has not been convicted of perjury so there is no direct impeachment. But prosecutors are going to have to be very careful never to bring up her character as an element of credibility. If they open that door, then the whole perjury issue can come in.”

“I don’t’ think this minimal sanction does anything to appease the public’s doubts about police accountability in our community,” says Milone.

11 Responses to “FDLE AGENT KATHY SMITH GETS AWAY WITH IT!”