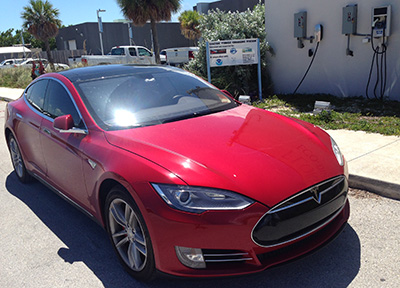 The charging station is part of Tesla Motors’ “destination charging” program to make travelling in an electric car more convenient. Owners can charge their plug-in electric vehicles while they tour the Eco-Discovery Center and other local attractions. The center is particularly relevant for electric car owners, as one of the facility’s many environmental exhibits explains the link between fossil fuels, rising sea surface temperatures, and changing ocean chemistry.

“This was the next logical step to ‘going green’ at the Eco-Discovery Center,” said Sean Morton, superintendent of Florida Keys National Marine Sanctuary, which runs the center. “We’re thrilled to support car owners who have made a commitment to reducing their carbon footprint.”

Tesla provided the charger, and its installation was paid for by Florida Tesla Enthusiasts, a state-wide car club for Tesla owners. Mote Marine Laboratory, a non-profit ocean conservation organization that maintains the aquarium inside the center, will underwrite the charger’s operating costs through donations at the Living Reef Exhibit and through their “Protect Our Reefs” license plate program.  A universal vehicle charger has also been installed to accommodate most other electric vehicles already on the road.

The Eco-Discovery Center, built in 2006, is already LEED Silver Certified and has solar roof panels that offset the electricity needed to operate the building. This means a portion of the electricity used to power the stations comes from a carbon-neutral source. Inside the Eco-Discovery Center, an educational exhibit on fossil fuels’ impacts on the ocean environment includes a real-time display showing the amount of electricity the roof panels generate.

The availability of charging stations for electric cars has been limited in Key West (the continental United States’ southernmost city) compared to the rest of Florida, said Nigel Mould, vice president of Florida Tesla Enthusiasts and a Mote Marine Laboratory board member.

“It was always hard to be certain you could find a place to charge your car when you travelled all the way to Key West,” said Mould, who drives a Tesla Roadster. “Folks from all over Florida contributed to this, and now it’s great to see it available for everyone to use.”

The charging station is mounted on the side of the Eco-Discovery Center building at 35 East Quay Road on Key West’s Truman Waterfront. Its dual plug-in design features one side with a free Tesla HPWC plug-in which fits all Tesla models. The other side is a more universal Eaton Level 2 plug-in that allows owners of other plug-in electric vehicles to pay 50 cents per hour with a debit or credit card and charge for up to eight hours.

“This is already a great walking and bike-friendly community and this charging station is within walking distance of Old Town, so it just adds options for both locals and tourists to reduce their carbon emissions by choosing to drive an electric vehicle,” Wolf said.

NOAA’s mission is to understand and predict changes in the Earth’s environment, from the depths of the ocean to the surface of the sun, and to conserve and manage our coastal and marine resources. Join NOAA on Facebook, Twitter and our other social media channels.