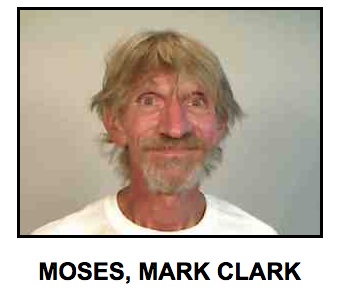 A drunk man from Big Pine Key burglarized a bulldozer overnight, leaving behind his wallet which deputies used to identify and charge him.

The owner of the bull dozer is a company called Unlimited Debris. A representative of that company met with Deputy Ken Fricke Thursday morning just before 9 a.m. after he discovered someone had entered and damaged the bull dozer overnight.

He said he found the windshield broken as well as both the right and left hand mirrors. He told the deputy whoever had been inside the bull dozer’s cabin had left behind a brown wallet, a pair of sneakers, spilled beer and cigarette butts.

Inside the wallet, Deputy Fricke found identification for 65 year old Mark Moses, including a driver’s license, VA card and Social Security card. Detective John Gabay located Moses in the Winn Dixie grocery store. Moses admitted to entering the bull dozer during the night. He identified the sneakers and the wallet as his, but said he has no memory of what he did in the dozer’s cabin.

Moses was placed under arrest. He was charged with burglary and criminal mischief and he was booked into jail.

One Response to “Drunk Man Leaves Behind Wallet at Burglary Scene”