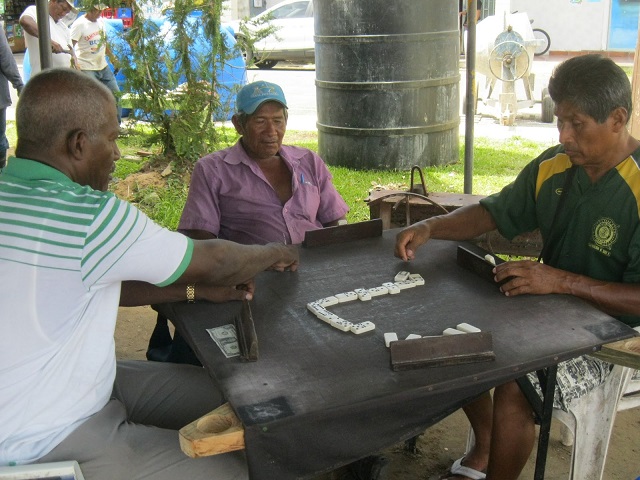 Years ago, I nick-named this modest little spot The Domino Triangle. It was too tiny for an actual building, so a tarp had been slung to provide shelter from the sun and the rain. Beneath it was a folding card table and some battered chairs, where the locals would play dominoes.

When the tropical heat would begin to lessen in the late afternoon, the men would start gathering. They arrived with beer and a little pocket money. They also brought something that is increasingly rare in our modern world – modest, earth-bound happiness.

Their conversations revolved around the elemental concerns of bedrock Humanity – too much work and not enough pay, the entertaining inscrutability of wives and girlfriends, and the follies of their grandchildren. Nobody was discussing how many pixels the next iPhone camera would have or how Amazon’s stock price is so high when they never turn a profit.

I often stopped and watched them play. In dark moments, when the melancholy was heavy on me, it reassured me to realize that scattered all around our troubled planet at this very instant, there were millions of other people laughing and teasing as they shuffled the tiles for the next game.

But aside from the relaxed playfulness and friendship that permeated this simple triangle, there was something else in play here that I had been trying to unravel for a long time. The other day, when someone unexpectedly had to leave the table, the men asked me if I wanted to play. When I told them that I didn’t know how, they offered to teach me. One of them joked that it probably wouldn’t be a very expensive lesson. Another laughed and asked me how much money I had in my wallet.

Although I felt honored by this invitation, I declined and then finished my errands in town and headed back to my boat. That evening, as the sun departed and the stars arrived, I sat on AVENTURA’s deck and wondered what it was about these simple domino games that touched me so deeply. Suddenly, a word cascaded into my consciousness that seemed to answer my question. The word was ACCEPTANCE.

The power of that realization, led me to question what word I would use to describe myself, as I wander through my Middle Years. I could not settle on one, but there were two that definitely seemed appropriate to this stage of my life’s voyage. Those two are Seeker and Awakener. For many years now I have been seeking to understand how the world truly works. And simultaneously, as my awareness increases, I have been trying to awaken others to the fact that those who control the narrative about how the world works are DECEIVING us.

For years now, in over 100 essays, I have tried to expose this. And a thousand others, scattered throughout the internet, have raised their voices in protest as well. But when I survey the societal vectors, do I see a world where suffering is declining and compassion is increasing? No – emphatically NO! Our efforts – and my efforts – just seem so useless and hopeless. But then that long-suffering idealist within me reminds me that Voltaire and Thomas Paine and Gandhi were also bludgeoned by doubt as they tried to crusade onward. And I momentarily find comfort in the words of Ulysses as he rallied his men, “Arise, my friends, tis not too late to seek a newer world!”

But look at this “newer world.” We humans have “progressed” to the point where our philosophy is so puny and our weaponry so mighty that we risk vaporizing our species and our planet. And if we avoid that, we still might poison our biological support system. And, if we survive that, we still face another apocalypse as the Digital Age Dr. Frankensteins try to merge us with machines and THE CLOUD.

And so, as I watch the contented men slap the dominoes on the table and chatter happily about inconsequential matters, I recognize that there is great wisdom in their acceptance of the way things are. They instinctively understand that my attempts to make the world at least a tiny bit better are probably doomed to failure and may lead to despair. They know in their heart of hearts that this life is short. But they also know that the beer is cold and laughter is superb medicine and there is a chair opening up at the table, so why don’t I join them?

And perhaps – I finally will …