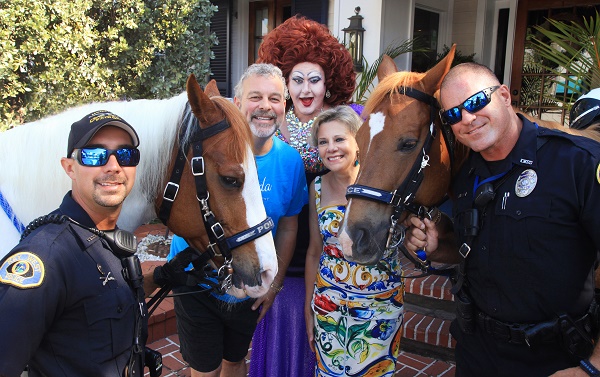 “The Key West City budget provides for the stable at the Truman Waterfront, feed, hay, and basic equipment, but it’s public fundraising that supports emergency veterinarian expenses, certain specialty tack and equipment, out of budget items and even the possibility of obtaining new horses,” explained local businesswoman Jane Gardner, who kicked off fundraising efforts for the Unit in November and is co-host of the April 26 event.

Christopher Rounds, proprietor of La te da is the evening’s benefactor and co-host. Rounds grew up on a horse farm in upstate New York and spent years in the world of riding competitions and events. “When Jane told me about her fundraising work for the Mounted Unit, I said, ‘Just tell me what you need!’ They are such an asset – I’ll to anything to support the police department and Mounted Unit for our community,” Rounds said.

Only 40 tickets are available for the dining experience with after dinner drag show, at $125 per person. These are selling fast, so it is recommended to book now. An additional 60 tickets are available for the Crystal Room drag show a la carte, at $40 each. Dinner is at 6pm, with the drag show following at 8:30; those who arrive at 5:30 will have the opportunity to meet two of the Mounted Unit horses, who will not be signing autographs, but will stand for photo op’s.

To reserve tickets, or to make a donation to the Mounted Unit fund, contact Jane Gardner at 305-780-7959 or email jane@janegardnerinteriors.com.