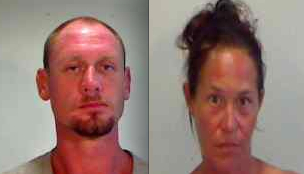 Key West Police Detectives have arrested two suspects and are searching for a third after they allegedly beat and robbed a man in Old Town last night.

Just before midnight, the victim says he was attacked on Elizabeth Street by a woman and two men. He said he was walking home from a local restaurant when two men knocked him down and began beating him. A witness in a nearby house heard the victim yelling and came outside to see two men and a woman standing over the bleeding victim, yelling at him. The witness threatened to call the police and all three suspects left, taking the victim’s phone with them.

When police arrived, the victim – who refused medical treatment — was able to describe his assailants. Officers were able to track the cell phone nearby on Duval Street where they found a couple matching the description provided by the victim and the witness. Dustin Edick, 31, and Brandy Lett, 38, were arrested and charged with battery, grand theft, and robbery. Lett is also charged with violation of probation.