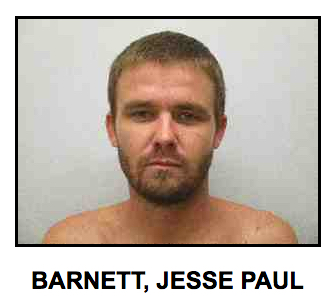 Investigations and interviews with friends of Barnett put him in the vicinity of Grassy Key, where the motorcycle had been recovered, on the approximate date the motorcycle was stolen. Numerous people identified the person shown in the photos and video stealing the motorcycle as Barnett.

A warrant was issued for his arrest and he was picked up at his residence on January 19th. He was charged with Grand theft and he was booked into jail.

The Sheriff’s Department says, “Thanks to everyone who helped to solve this case!!!!!!”

Sheriff’s Detective Leon Bourcier is asking for the public’s help identifying a suspect who stole a Honda motorcycle from a Marathon residence.

The 2013 Honda 250 CRF was taken from a home on Sombrero Boulevard just after midnight on November 28th. The owner told Deputy Matthew Cory he went to bed on the 27th, there were two matching motorcycles parked next to each other in the driveway. When he woke the next morning, one was gone.

A neighbor was able to produce surveillance video of the suspect as he stole it. The suspect, a white male wearing a stocking cap, dark colored zip up hoodie sweatshirt, blue jeans and sandals, spent about a half an hour working on the steering portion of the bike first; he is apparently unable to start the motorcycle and is seen pushing the bike away from the house.

The motorcycle was later recovered on Grassy Key, near Peachtree Avenue and Crain Street in a wooded area. There were a number of parts missing from the bike including the seat cushion, front headlamp assembly and left fender cover from the rear of the bike.

Anyone with information about this crime should contact the Sheriff’s Office at 305-289-2430. Callers who wish to remain anonymous can call Crime Stoppers of the Florida Keys. If a Crimestoppers tip leads to an arrest, the caller would be eligible for a cash reward. The Crimestoppers hot line number is 1-800-346-TIPS. Tips may be made anonymously on line at www.tipsubmit.com or via a text message to 274637 using the keyword TIP136. 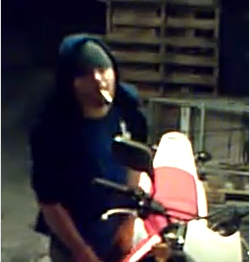