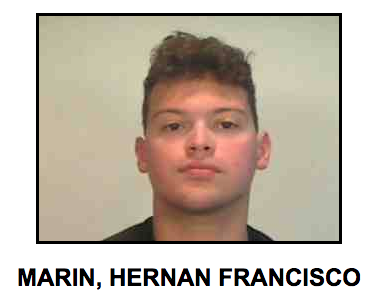 A Monroe County Sheriff’s Office deputy was arrested Wednesday morning for pointing a gun at his girlfriend and choking her until she blacked out.

Hernan Francisco Marin Jr., 23, who is assigned to the Lower Keys, was charged with domestic battery by strangulation and aggravated assault with a deadly weapon.

The incidents were reported to the Sheriff’s Office on Tuesday. The victim told detectives the first incident occurred on Sept. 4, 2017 whereupon she told Marin she wanted to break up during a discussion in front of her house. She said Marin then choked her and she blacked out. The victim said Marin became obsessive and suicidal, but she decided to try and work things out. She said Marin later began talking about murder/suicide and how he can’t live without her.

On Jan. 27, 2018 the couple went to Key West and drank alcohol before having an argument when they returned home. Once home, the victim said Marin grabbed her, pushed her, picked her up by her neck and slammed her down on the couch. She said he again choked her until she blacked out. When she said she was calling police, Marin pulled out a gun and told he that he was not going to allow her to call police. She was able to talk him into putting the gun away, but they continued to argue. Marin told her he is a deputy and it was her word against his. The victim said she decided to stay based on her financial situation.

Detectives also interviewed a friend of the woman who told them he noticed bruising on her arms. She admitted to the friend she was in an abusive relationship.

Detectives set up a phone call between Marin and the woman on Tuesday in which they listened in. She brought up the incident about Marin pointing the gun at her.  Hernan said he already apologized for that.  The woman asked if he thought threatening her with a gun and strangling her was OK.  Marin said it was not OK and they have issues they need to work out.  Marin repeatedly said he was sorry for the incidents that occurred when he was intoxicated.

Marin was arrested and booked into the Monroe County Detention Center on Stock Island where he remained early Wednesday morning on a $30,000 bail.

UPDATE: Hernan Francisco Marin Jr. has been terminated from his employment at the Monroe County Sheriff’s Office.