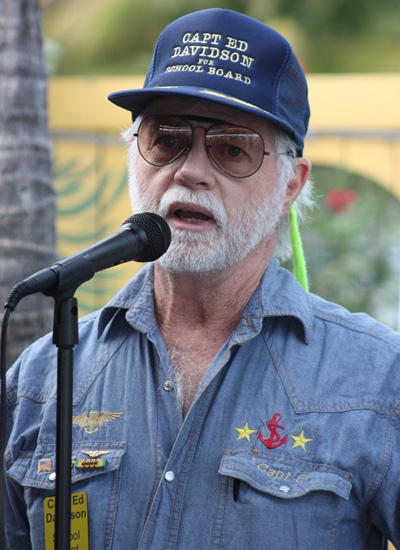 Some elements in the Schools Administration are unenthusiastic about providing Affordable Workforce Housing directly, and are broadly unknowledgeable of the issues as well — and were starting off half-cocked with practically no awareness of the vast amount of professional-grade work the county-wide Affordable Housing Advisory Committee (on which I had served for more than a year as the School Board designee) had already accomplished.

So I decided to pay them a visit Tuesday afternoon [November 14th] when housing issues were workshopped:

“For the record, I am Captain Ed Davidson, a former member of this Board who has personally attended more than 400 such meetings over more than 20 years – and raised the issues of affordable/workforce housing at many of those.

I read in a recent newspaper Mr. Porter’s quote that “Tuesday night felt like a little bit of a blast from our past with regard to board room climate and decorum…”  So since he apparently missed me, and obviously needed considerable advice on affordable/workforce housing, I thought I’d stop by today to give it to him.

Most of the controversy and acrimony that has recently erupted was unnecessary, because most the issues have already been thoroughly studied and the options extensively analyzed for more than a year by the Keys-wide Affordable/Workforce Housing Committee just last year – a process which this very Board and Administration authorized me to represent them in, and which I did with my usual full time focus and dedication during 4-6 hr meetings for more than a year.

All participants agreed this was by far the most replete, comprehensive, and well-documented study ever done about Fla Keys housing because all the major players at all levels in every part of the Keys fully and regularly participated – including everyone who has actually designed, funded, built, regulated or managed affordable workforce housing here (plus in other locations as well).

To remind you all, I myself was formerly Chairman of both the Fla Keys Zoning Board and the Comprehensive Growth Management Plan Drafting Committee for 2 ½ yrs, was appointed by the Governor to the original Critical Concern Oversight Committee, and helped fund and shepherd the Fla Keys Carrying Capacity Study through 2 reviews by the National Academy of Sciences, and several authorizations in front of the Gov and Cabinet.

The shortest distance between current marginal survival circumstances for many school district employees and an affordable future family life can be shrunk by not  wasting time re-inventing the proverbial wheel, but to promptly convene a joint meeting of the school board with the county affordable/workforce housing committee – for a whole day and working lunch, not just a brief, perfunctory workshop.  The majority of the necessary preparatory work has already been done, extensively and in detail.

The District needs to think of itself as a developer, not a bureaucratic agency, and no developer ever sheepily settles for the minimum the county is willing to automatically allow:  they put together a comprehensive proposal to maximize the use and value of their property, then go lobby and negotiate.  That’s why zoning boards and local planning agencies, and planning departments, and county and city commissions and conditional use permits exist.  And you have one thing developers don’t – which is genuine, unarguable public interest.

Funding?  There was a 7-9 million $ state grant for Keys housing already on the table when I offered to take on Marathon Manor as a full time project whether I remained on the school board or not, $ which went away when the Administration failed to put forward any proposal at all.  Surely there will be other fundings forthcoming in the aftermath of a century class storm such as Irma, and the TDC has a 50 million $ annual budget that could help.

Density?  You also have 67 Transferrable Development Units attached to Marathon Manor, units which have had various allocations in past political climates amongst market, transient, and affordable – and will be negotiable again.  And the District does not have the chief restraint of shifting locational impacts that most developers encounter, because the District is a Keys-wide employer.

Manageability:  Most all resident income constraints and reportage formats, behavioral restraints, and maintenance programs have already been worked out by existing housing programs and authorities, and would just need to be tweaked a bit for management and oversight arrangements with school district housing.

All of this will not remedy most immediate post-hurricane residential challenges, but it will give a massive dose of HOPE to those who want to remain members of the Monroe County Schools educational family – or want to join it in the future.

That’s important because the nature of life in the Fla Keys as everyone in this room (or in video or audio contact) knows it, is over.  Few of you or your children could ever again fully recreate the lives you had up until early Sep — many folks will need some help.  The school district has property, funding, permitting, and construction capacity, and must act because it can act — and therefore has the moral and ethical responsibility to do so, at Sugarloaf, Trumbo, and other locations.

A joint meeting of the affordable/workforce housing committee and the school board should be convened immediately.”

The reaction of all five School Board members to the information I presented to facilitate action on the affordable workforce housing crisis was more positive than the District Administration has been, and the new Board Chair ,Bobby Highsmith, forcefully admonished Superintendent Porter and his senior staff to stop emphasizing all the negative considerations and just figure out how to go forward.

The extensive work which I reported had already been done over the past two years by the County Affordable Housing Advisory Committee in addressing and resolving almost all the currently discussed misgivings was essentially unknown to the Board and the Porter Administration, and should now resolve or eliminate most impediments to progress on constructing some actual affordable housing in several locations — especially since two days after the Board workshop I provided all participants with direct web links to the major documentation, analysis, and reports produced by the County Housing Committee, which I served on for more than a year as the designated School Board representative.

The nearly 1000 employees of the School System, plus their several thousand spouses and relatives, should immediately make it very clear directly to School Board members how urgently the Board needs to act on this housing crisis.  So should other members of the Keys working class who are now competing with school staffs for hurricane-reduced housing stock.

2 Responses to “Davidson: “A joint meeting of the affordable/workforce housing committee and the school board should be convened immediately.””