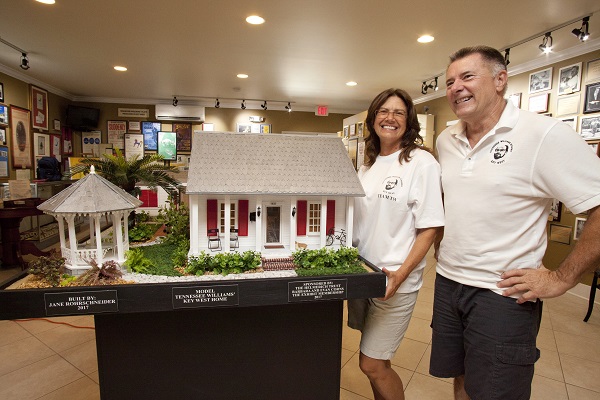 The curator-led tours will provide an overview of the highlights of the life and work of the iconic playwright while living in Key West from 1949 until his death in 1983. The first two, set for Friday, March 9 at 10:00am and Sunday, March 11 at 2:00pm will present “Tennessee Williams in Key West,” with particular attention given to a recently installed model of his Duncan Street home and writing studio, with creator Jane Rohrschneider on hand to detail the research, construction, and procurement of items for the model that represents Williams’ home as it was in the mid 1950s.

Tennessee Williams wrote the screenplay for The Rose Tattoo based on his Tony award-winning Broadway play of the same name and participated in every aspect of its Key West 1954 filming. “The Key West Filming of ‘The Rose Tattoo’” tour provides participants with details on the making of the film and prepares them to note interesting features of the movie that will play at Tropic Cinema on Monday, March 19 at 6:00 p.m.

“The mid-1950’s were a pivotal period in the life of the playwright,” says Beaver.  “His play The Rose Tattoo won a Tony for best drama on Broadway and the film of the same name was being filmed in Key West.”

Beaver promises “an interesting story behind the fact that an Italian actress with limited use of the English language won the Oscar for best actress for her role in this movie.”

The tours are part of a series of arts and cultural events that launched February 28 and run through early April in celebration of the literary icon. Included in the festivities are a Wednesday, February 28 limited-ticket kick-off party at the Whitehead Street home of exhibit founders Dennis Beaver and Bert Whitt, a plein air painting contest, taking place in downtown Key West on March 3, poetry and short-story writing contests, both of which are accepting online submissions now, poetry readings at the Key West Public Library, Monday night showings of Williams’ classic films at the Tropic Cinema, performances of two one-act plays at The Studios of Key West, and a March 26 Tennessee Williams birthday party at the Tennessee Williams Museum, to include contest award presentations, bubbly beverages, and birthday cake.

Admission is free for Society members and $5.00 for non-members.  Reservations (maximum 25 guests) are required.

For registration, visit www.kwahs.org/education/curator-tours. For a full listing of events and locations, visit http://www.kwahs.org/events/tennessee-williams-birthday-celebration. Sponsored in part by the supporters of the Tennessee Williams Museum.  For more information, contact Cori Convertito, PhD. at 305.295.6616 x112. Your Museums.  Your Community.  It takes an Island.