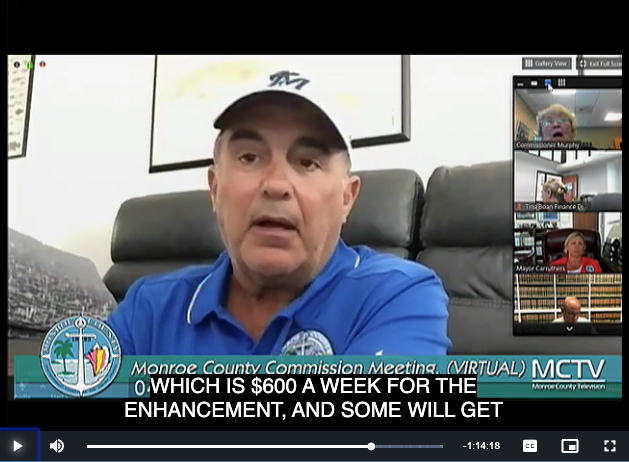 “We have to figure out a different way,” Commissioner Sylvia Murphy said before the vote. “Something that isn’t a person. Something that doesn’t need to pay bills and buy groceries, like a project that can wait until next year.”

But Murphy was the only commissioner who voted no on a resolution to furlough 61 county employees in response to the estimated millions in county revenue losses caused by the COVID-19 pandemic.

The county has 565 full and part-time employees and several temporary positions. Some of the employees who made the list to be furloughed no longer have any work because many public spaces and services have been shut down in order to combat the virus using social distancing measures.

Brian Cook, Monroe County’s human resources director, told commissioners the furlough policy will result in $49,700 per week in payroll savings. That works out to $795,200 over the 16-week period that employees would be out of work. (The County is using the same timeframe used in the federal government’s CARES Act.)

County staff is struggling, trying to estimate just how hard revenues are going be hit. “The question is how much are we not going to see,” County Administrator Roman Gastesi told commissioners. “Somehow we need to find an amount – it’s a guess. We know [hotel] occupancy is down around 90%.”

Gastesi explained that staff looked at the most vulnerable revenue sources for this event; those that are directly or somewhat directly related to tourism. “For example, there’s the tourist impact tax. Out of 5 pennies of the bed tax, 4 goes to the TDC and 1 gets split up – half to county and half to the land authority. Last year the county received $168,000 for the last week of March, $500,000 for the month of April, and $398,000 for the month of May. Those are actual collections,” Gastesi said.

The total revenue from all tourist related sources for the last week of March along with the months of April and May last year was $8.9 million for operations and $6.6 million for the capital fund, a total of $15.5 million.

“This will rack your brain because there’s no precedent for me to make these estimates. I really have to watch this every day,” said County Budget & Finance Director, Tina Boan.

Gastesi said they used those 2019 income figures to ultimately come up with a best guess estimate. “Of the 15.5 million I’m going to guess we are not going to see 5 -7 [million] so we need to find 8-10 [million].” But everyone in attendance acknowledged that the crisis could in fact go beyond May.

Gastesi told commissioners that staff had already instituted several measures such as a hiring freeze and a purchasing freeze. He said that the county currently has 30 vacant positions that were budgeted for this year. Not hiring those people will save the county $507,000 over a 16-week period. Additionally staff will not be starting any new capital projects that were budgeted but not yet commenced and will be searching for ways to reduce expenditures on projects already underway.

Boan explained that the County maintains a reserve fund equal to approximately 4 months of operating expenses. That amount is $31 million. Of that, $11 million has been specifically designated for use in response to hurricane and other disasters. The County currently has $35 million in reserves; $4 million more than is required. The county approved, also on Wednesday, the expense of $2.5 million already spent by the county on the COVID-19 response.

“My recommendation would be that we start putting plans in place to accomplish this expenditure reduction. We want to be in front of this, not standing at the end of May saying, ‘Oh my, we’re short revenue,’” said Boan.

“Everything will bounce back,” Gastesi said. “But it’s gone for now.”

The commission approved the furloughing of 47 employees and partial furloughing of another 14. Gastesi said furloughed employees will be receiving enhanced unemployment compensation from the state and federal government. “They will receive a $600/week enhancement and $275, so $875 a week. Some have gotten the initial $1200 coming directly from the federal government. The state’s a little delayed – a lot delayed – in getting their system up. I can’t answer the question about when they are going to get it. I have been told that it will be retroactive.”

“They’ll get a paycheck next Friday that gives them this and next week to begin unemployment processes,” said Cook, “Nobody likes the idea of furloughs,” Cook said. “It’s just an unpleasant business.”

The furlough policy lifts restrictions on employees’ ability to use any and all of their earned time off including vacation, sick, and comp time. Employees will keep their medical insurance. Visual, dental, and life insurance will all be preserved.

County staff also proposed paying county workers who are required to come into direct contact with the public while working outside the home time and a half, since they were taking the risk of exposure to the novel coronavirus, but commissioners found the measure too broad and expensive and didn’t believe they had all the details they needed.  After attempting an amendment commissioners chose to shoot down that portion of the policy.

CLICK HERE to view just the summary of all sources of revenue in the 2020 Adopted Capital and Operating Budget.