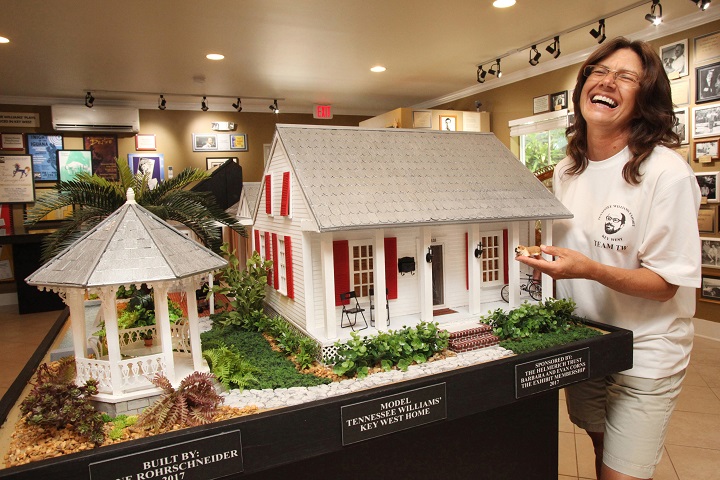 Artist Jane Rohrschneider holds a tiny model English Bulldog, one of two faux canines that inhabit an elaborate model of Tennessee Williams’ Duncan Street house, crafted by Rohrschneider and installed on Tuesday, August 8, 2017, at the Tennessee Williams Key West Exhibit, 513 Truman Avenue in Key West. The artist said the approximately 24 square foot model, which is 1/24 scale, took eight months to craft and represents how the home of the great American playwright looked in the 1950s. Since features of the property have changed over the years, Rohrschneider made use of old photos to keep it as true as possible to the period and even reproduced an authentic stained glass window in the home, using her kiln to create a fused glass replica. The fully furnished model, commissioned by Tennessee Williams Key West Exhibit curator Dennis Beaver, Bert Whitt and the Exhibit’s board of directors, and funded by The Helmerich Trust, Barbara and Evan Corns and the members of the Exhibit, is now on permanent display.