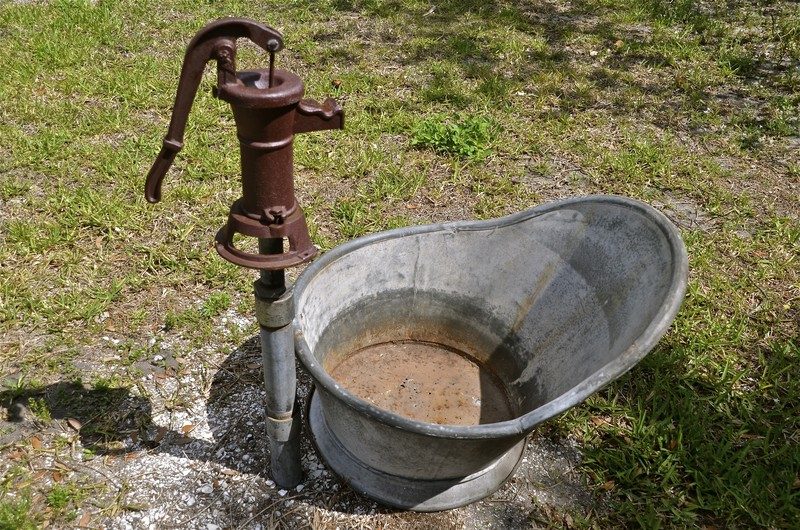 Did a county planning manager, developer Pritam Singh, and a Hawk’s Cay HOA manager lie under oath to the Monroe County Planning Commissioners in 2014? They all swore that county records showed there were 12 unbuilt “leftover” hotel units at the Hawks Cay resort on Duck Key. “They are vested rights,” claimed Mr. Singh, who convinced the board to approve a transfer of those 12 hotel units to his new project at Oceanside marina.

However, when The Blue Paper discovered that there were over 60 bedrooms too many at Hawk’s Cay, we asked to see those so-called “records.” To no one’s surprise the county announced that the infamous records couldn’t be found, even though the planning manager had sworn under oath that records, including memos and a spreadsheet, had been carefully kept all those years.

The state attorney decided to look into it.

So, did Pritam do it?

Pritam did not do it. He is Pritam! He did not sign the affidavit. SHE did. Her name is Michelle Koby. She was Pritam’s construction coordinator for the Hawks Cay development. And would you believe that it may be all her fault?

Blue Paper: “Is this suspicious?”

CW: “How do I know this is an official record?”

BP: “You gave it to us. Didn’t you get it from Pritam Singh himself?”

The veteran investigator goes back to his reading, shaking his head.

But first let’s go back to that controversial Planning Board meeting of November 19, 2014. Joe Haberman, who was the County’s Planning Department Manager at the time, has just finished explaining how he had personally verified county records and how those records show that Mr. Singh indeed owned the vested rights to 12 bedrooms/bathrooms which were not already built at Hawks Cay.

“So where are those documents?” the Planning Board Chairman, William Wyatt, asks abruptly, visibly uncomfortable with the whole thing.

Haberman doesn’t produce the “documents.” Instead he switches to a completely different type of proof: “We have a signed affidavit,” he told them.

And that was Michelle Koby’s affidavit — one of the three documents now on Chris Weber’s desk. In that sworn statement, Ms. Koby explains that she was Pritam Singh’s construction coordinator and that she has since become the HOA manager at Hawk’s Cay. In 2014, she swore Pritam Singh had built only 571 bathrooms and that only one building permit for an addition [effecting bedroom/bathroom counts] had been approved at Hawk’s Cay post-completion. Adding those 571 bathrooms to the 44 already built by the previous developer, they said, left 12 unbuilt bathrooms, since Mr. Singh’s permit required a cap of 626.5 bathrooms.

And that is where everything goes south.

The Blue Paper had requested county public records to no avail. But when the State Attorney got involved documents magically reappeared. Among them, the second piece of paper on the table: another document signed by Ms. Koby herself. It was dated April 29, 2004.  At that time, contrary to what she would claim in 2014, Ms. Koby certified to the county that all but 2 of the bathrooms allowed at Hawks Cay were accounted for —not 12.

Why is that important? Because, believe it or not, every bathroom not built at Hawks Cay meant one hotel unit [each worth around $100,000] that Pritam Singh could send over to Oceanside. To transfer one hotel unit, a developer needs a building right for a combination of one bedroom and one bathroom. (At least that was the consensus during that 2014 Planning Commission meeting.)

When we went looking for those missing bathrooms we realized that the list Pritam Singh had offered to the Planning Commission in 2014 showed that some 2 bedroom Hawks Cay villas were described as having zero bathrooms, which should raise suspicions.

And so now comes the third piece of paper: An official county record from 2005 that shows what the actual count of bedrooms and bathrooms built at Hawk’s Cay was at that time. Could this be one of the missing documents Haberman referred to in order to justify his support of the transfer of the 12 precious hotel units to Oceanside?

Maybe. There is a problem though. That county document we found specifically states that there was only one bathroom left unbuilt at Hawk’s Cay in 2005 – not 12 – as Haberman and Pritam Singh had told the Planning Commission that afternoon. 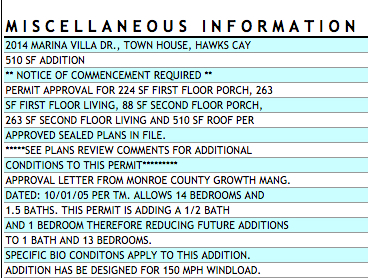 Chris Weber let out a long sigh: “We need to know if we can even authenticate these documents.”

We asked, “Did you interview Ms. Koby? That’s how they do it on TV.”

CW:  “No. But believe me she’s going to say that was just a mistake.

BP: “What about Haberman?”

CW: “He has not returned my phone calls but I talked to Mayte. [Mayte Santamaria is the current Sr. Director of Planning.] “She said I have all the right development agreements available in the county files and the documents I have match the county’s.”

BP: “Exactly. But did she show you the spreadsheet or the memos Haberman was talking about? Did she show you any County documents that showed an accounting of bedrooms and bathrooms at Hawk’s Cay?”

BP: “But that’s the point. Right?  “Where is the spreadsheet showing those 12 bedrooms and bathrooms that Haberman was talking about?”

Chris Weber kept rearranging the three pages in front of him as if they were the pieces of a puzzle that were going to suddenly make sense. He finally says: “At this point I don’t think these have enough weight to win a perjury case.”

He looked at the documents one last time before sliding them into his folder, “I’ll have to go back and see Shillinger. (Bob Shillinger, the Monroe County Attorney). I need to hear what he has to say about this.

So where are we now?

So far Bob Shillinger and the rest of county government have been supportive of Pritam Singh’s version of the facts. It goes something like this: Mr. Singh is as shocked as we all are to learn that a good many of the 2-bedroom villas he had listed on his presentation to the Planning Commission in 2014 were in fact being rented and sold as 3 bedroom villas. Not his fault however if dishonest and unscrupulous new owners break the law by putting a bed and a closet in the room Mr. Singh had designated as a “den.”

We learned about one of Mr. Singh’s secret weapons: If you want to do something clearly prohibited by the county’s code, just call it something else. If the county code prohibits rentable “accessory units” call them “lock-outs.” If you cannot build a 175-room hotel at Oceanside Marina call it a “vacation rental resort” and if your floor plan for 3 bedroom apartments at Hawk’s Cay are using up bedrooms too quickly, just replace the words “third bedroom” by the word “den.”

But is it not all too obvious? Not at all. Pritam learned how to do it from a children’s book called the Emperor’s New Clothes. Oh! You read it too!? Well then you know.

And all the members of our government who marvel at his cloth so fine that only very smart people can see, will continue to strongly defend the notion that Ocean’s Edge is not a hotel, and Mr. Singh didn’t build all those 3-bedroom villas at Hawk’s Cay! “Can’t you read? It says, “den” on the plan! Not bedroom!”

The problem with the county officials’ version of Mr. Singh holiness, is that thanks to the documents obtained by the State Attorney (if only they had taken the time to read them) we now have damning proof that in 2004, when the construction was reaching its end, Mr. Singh’s own construction manager admitted to the county that all the bathrooms but 2 had already been accounted for at Hawk’s Cay by the end of April 2004.

By December of 2005, again, county building permit files, signed off on by Michelle Koby herself, reflect that only 1 bathroom was left unbuilt at Hawk’s Cay.  Joe Haberman’s name also appears in the notes and Pritam Singh’s signature appears on page 72 of the permit file. 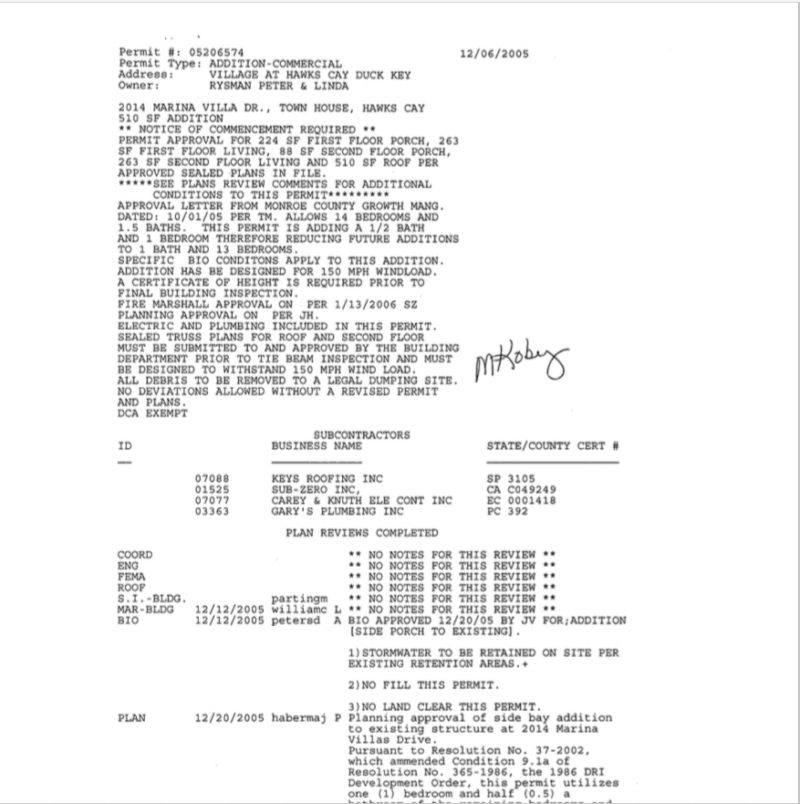 Yet in 2014, they all swore, under oath, that Singh had 12 bathrooms left-over and that he could combine them with 12 left-over bedrooms to form 12 hotel units and transfer them over to Oceanside Marina.

Pritam Singh’s defense: That he had no idea that upwards of 60 2-bedroom villas had turned into 3-bedroom villas over at Hawk’s Cay is also becoming more difficult to believe. We found that between 2004 and 2008 Singh’s own real estate company, Singh Real Estate Company, had sold around 30 of those so-called 2-bedrooms villas, but had advertised them as 3-bedroom villas. During that time Mr. Singh was the President of Singh Real Estate. The contact agent for those listings was Margaret Crowley, a fellow member of the Board of Directors for Singh Real Estate. The records of those listings are available on the MLS website that is used by licensed real estate agents.

The historic record of public input over the permitting of Hawk’s Cay shows that many opponents to the project believed the 2-bedroom plus a “den” concept was “a numbers game.” In response Singh changed the plans again, calling the extra rooms “formal dining rooms” instead. Calling them what they are, 3 bedroom villas, would have resulted in smaller homes elsewhere in the project and a smaller profit. In 1998, a county commission that was soon to descend into an enormous corruption scandal, sat stone-faced through this bedroom/den/dining room magic trick as if it was the word of God. Most likely that county commission would have been as ready as the current one to blame everything on the individual purchasers of the villas, rather than on the great wizard who’d created it all.