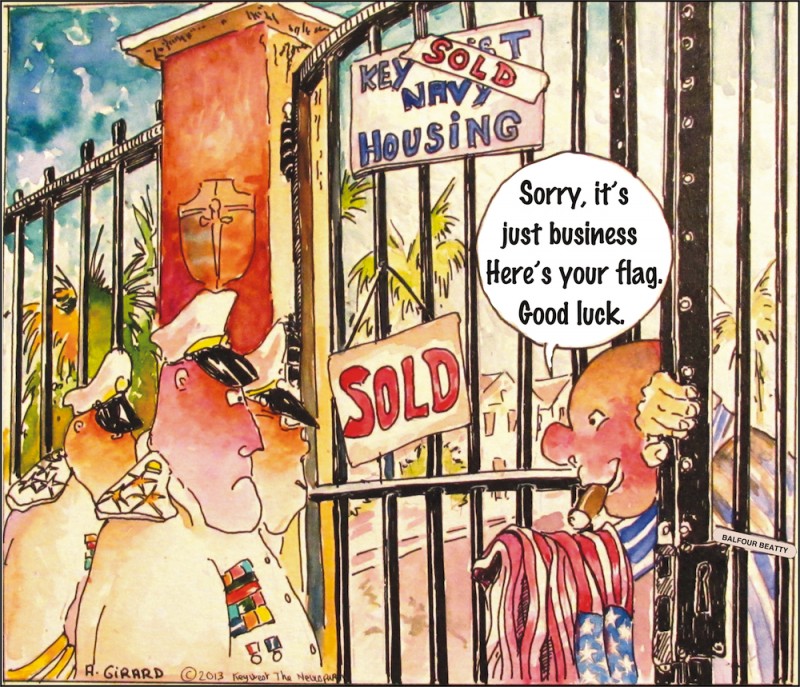 Whatever the Court decides it will have far reaching consequences for military bases all over Florida and across the nation.

In Monroe County, the school district will be the biggest winner if Balfour is forced to pay property taxes.  Indeed 80% of local school funding comes from property taxes.  Funding has been so low in recent years that last year’s budget cuts were in the neighborhood of $ 6.2 Million.

Interestingly enough one of the biggest stresses on our school budget is the cost of schooling military children because federal property is exempt from property taxes.  According to Jocelyn Bissonnette of the National Association of Federally Impacted Schools (NAFIS) in Washington D.C., Monroe County was slated to get $1.8 Million in federal impact aid to help defray costs of educating federally connected students last year.   What the district ended up getting was less than $240,000.   This year the budgeting discrepancy is expected to be even greater.

Since 2007 Balfour’s subsidiary, Southeast Housing LLC, has owned almost 900 units of housing in Key West. Until privatized military housing contractors began arguing that they should be exempt from property taxes, balancing school budgets and thereby benefiting children of military families, was one of the things the privatization of military housing was meant to accomplish.

As Balfour was shrugging off its duty to pay local property taxes, it was busy convincing the US Navy to allow it to sell large chunks of real estate in several military installations across the southeast; extremely profitable transactions. In Key West for instance, Balfour’s LLC was able to acquire 24-acre Peary Court from the Navy for free, then turn around and sell it in a private sale for $ 35 Million.

Even though the Navy has kept totally silent regarding Balfour’s real estate transactions, a stack of emails obtained by The Blue Paper through a Freedom of Information Act request reveal considerable in-house turmoil.

Apparently back in 2009, just two years into a deal that included furnishing base housing for 11 military installations in the Southeast, Balfour claimed to be in financial distress and pushed for a bailout on an anticipated $65 Million dollar shortfall.  It proposed raising funds by selling off those housing projects that were under occupied.

The decision to sell Navy properties was extremely controversial, particularly among base commanders.  Some accused Balfour of manipulating the data to force the sale of prime real estate.  Balfour had claimed that lack of occupancy justified the sales, but Commanding Officers weren’t buying it.

“I’m having a hard time seeing the premise that Gulfport has an occupancy problem,” said Captain Brown, Commanding Officer at Gulfport,MS.

Captain Aaron Bowman, Commanding Officer of Naval Station Mayport, FL wrote, “Mayport has had 100 units empty for six months since it was directed to vacate for a construction process that has not started.”

“Occupancy accounting, why are they using 750 homes as a basis vice the end state which is considerably less, but of course drives us to the negative side of the books?”, asks Captain Glen Little, Commanding Officer Naval Station Charleston, S.C.

Some CO’s complained that Balfour would be allowed to sell the best units, which either did not need renovation or had just been renovated which would leave the enlisted personnel to reside in inadequate dilapidated units.

The general feeling of being short-changed by Balfour is best expressed in a report sent out by Navy Facilities Headquarters of a conversation with the NAS Key West Commander Holmes:

“NAS Key West feels they are the dog end of PPV… He believes we are past the point of trumpeting the benefits of PPV.  He thinks it is time for the services to talk with Congress proactively about potential problem pitfalls.”

“…the bottom line is that I think the military members are going to continue to get the short end of the stick in this deal when the entire project was put together to improve quality of life in our housing areas.”

“I really think we are opening ourselves up for punishment by putting the property on the open market and giving proceeds to the partner [Balfour],” wrote CO Bowman, “… there is not an argument to reduce housing units at Mayport other than for financial gain to the partner.  I can think of no other argument to sell off housing at Mayport given the high level of occupancy and impending growth in population … the US Navy seems way too eager to jump in head first and bailout the partner by giving up valuable and desirable property, reducing requirements in renovations, losing community centers, etc.”

The “problem” most often expressed is that to allow Balfour to sell land today would reduce the rental revenue and would thereafter turn into a larger problem, forcing more sales of land.  In other words, Balfour would have to sell more land to compensate for the loss of revenue caused by the sale of land.  No one said  “ponzi scheme” but that is the term that comes to mind.

A remark by Regional Commander Richard Wolf was particularly telling of Balfour’s cutthroat methods.  Apparently, after pointing out the projected $65 Million shortfall, Balfour asked the Navy to agree to furnish a contractual  “stop work notice” to remain in effect while organizing a “re-scoping” of the project.  CO Wolff wrote of his concern that it was “taking a long time to get cost savings data from BBC [Balfour Beatty Communities] and this [was] potentially going to further delay a decision which [might] mean lost dollars in fees for the LLC (but BBC via BBC Construction [would] be getting those fees via lost work/delay claims).”

Key West CO Captain Holmes described the re-scoping as “what looks like a bailout on the backs of our military families.”

According to a well-informed source, Balfour Beatty takes out an approximate $ 100,000 /month in profit from its NAS Key West housing rentals alone.  It just brought another $ 35 Million free and clear into the LLC and yet it will soon claim in Court that it cannot possibly provide housing for the military if it is required [like the rest of us] to pay property taxes.

In the meantime, our property appraiser Scott Russell, in the role of David, prepares to battle Goliath Balfour in Judge Audlin’s courtroom.    Stay tuned.