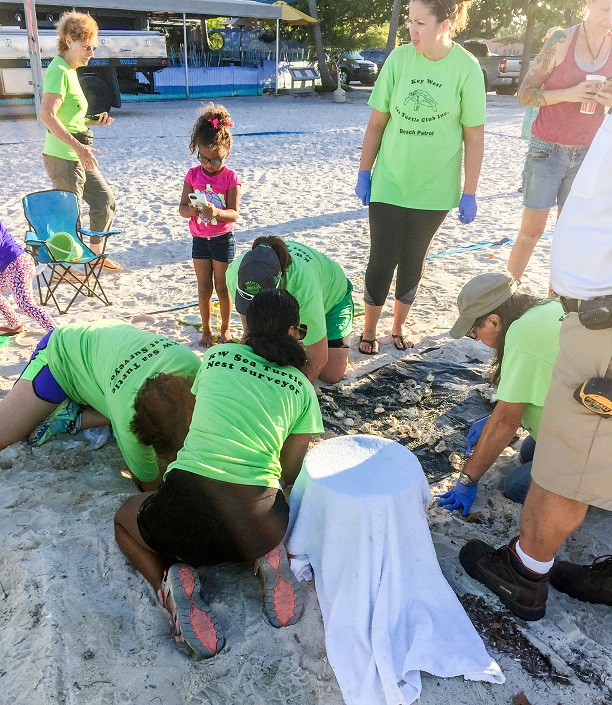 It was a sight to behold Sunday night at Monroe County’s Higgs Beach in Key West. At about 9:15 p.m., 104 baby loggerhead turtles – just 2 inches long – waddled as fast as their tiny flippers would take them to their new home in the sea.

Ralph Capone, president and founder of the Key West Sea Turtle Club, was excited: “Higgs Beach hasn’t had a successful turtle nest on it since 1985 or ‘86. There’s not enough sand to dig down to find a sweet spot for a turtle to put her eggs because it’s primarily coral. But this turtle found just the right place.”

The momma turtle had dug a hole that was 17-inches deep and 6-inches wide. On May 15, the nest was found – right in middle of the popular County beach and too close for comfort to the beach volleyball court. Monroe County’s public works employees temporarily took down the court’s net and built protective fencing around the nest.

Then the wait began. After the Fourth of July passed with no hatchlings, Capone began to worry: Could the lack of rain, the incessant hot weather and the shallow hole have caused the eggs to be “cooked by the sun?”

On Day 56, his worries were over. The baby turtles had cracked through their shells and began digging out of the sand under the protection of night. They huddled together until they all were ready to make the mad dash to the sea as a group, following the ambient light and a black plastic bag “runway” created by Capone.

Seventy-two hours later, Capone and others excavated the nest. He was happy to count 104 cracked shells, with only 4 eggs found infertile and two hatchlings that did not survive. He also discovered one live hatchling straggler, who was escorted to the sea later that night.

Capone praised the County workers and the Sheriff’s deputies for protecting the nest.

Once the hatchlings reached the sea, Capone says they began “frenzy swimming. They had to swim about 8 miles that night to the Sargassum weed line. That was their mission. From there, the seaweed will carry them like a raft to start their new lives.”