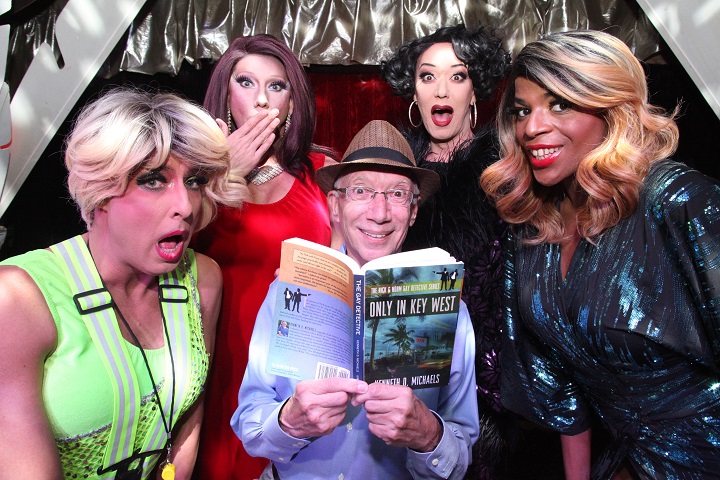 On Friday, June 9, from 5-7pm, author Kenneth D. Michaels will debut his latest mystery, “Only in Key West” at the 801 Duval Street Cabaret above the 801 Bourbon Bar in Key West.

“Only in Key West” is a sequel to Michaels’ first novel, “The Gay Detective,” which earned kudos in 2106: the International Readers Favorite Book Award and the Reader Views Award. He was also a finalist in the USA Best Book Awards.

“Only in Key West” reflects our local “One Human Family” philosophy,” Ken said. This is illustrated in his novel when Nick and Norm, who have radically different personalities, learn to appreciate and value each other’s gifts and quirks as they hunt down a grisly serial killer.

Billed as a work of fiction, some of the characters shooting and sashaying their way through Michaels’ pages will jingle a bell of recognition. Key West’s world-famous drag queen Sushi (pseudonym “Sho Yu”) and other “801 Girls” play pivotal roles in the story.

In order to get authentic insight into the performers’ world, Michaels interviewed Sushi and some of her team, attended staff meetings and observed them back-stage where he was able to witness their dramatic transformations.

Michaels’ will also have copies of “The Gay Detective” available for sale at the event. Purchase of “Only in Key West,” includes raffle tickets to win seats for two at a Sushi cabaret show, along with a $40 bar tab. An official Key West Pride celebration event, raffle proceeds benefit Key West Pride 2017.

Michaels’ books are also available on Amazon. Attendees at his book debut and signing event also have the opportunity catch two rounds of the Stoli Key West Cocktail Classic Run Off – the world’s largest annual LGBT bartending competition, at 5 and 7pm.