On January 30, 2018 the Monroe County School Board voted to vacate the parcels of land it owns on Trumbo Road. Their goal is to assist with the workforce housing crisis.

One of the most valuable pieces of real estate in the Keys, the 6 acres of waterfront property in downtown Key West, could be transferred, for free, to developers.

Under a proposal put forward by Key West’s multi-millionaire, John Padget, developers would then build 480 “affordable” studios and one-bedroom apartments to be rented to “key-employees.” What are “key-employees”? Under state law they are anyone a county or municipality declares to be “essential”.

Does this deal pass the smell test?

In the past, the Trumbo property supported vocational training programs; something every candidate for School Board champions… while campaigning.

For you Blue Paper readers we have crunched the numbers and reviewed the data. Here’s what we found: 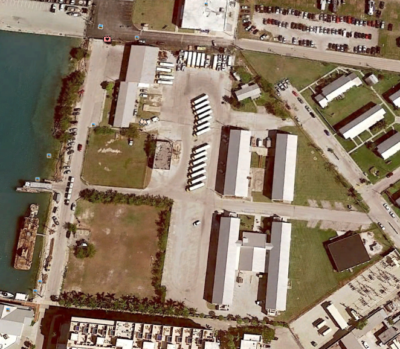 The School District’s administrative offices and school buses are currently located on Trumbo Road. The plan is to build a new school bus terminal on Stock Island. The Board has already spent $3.2 Million, pre-construction, just to purchase an adequate piece of land. As a reference, the construction of the new terminal for city buses on Stock Island, completed in 2016, cost over $9 Million. The larger terminal required for the District’s school buses and ballooning construction costs could drive the relocation cost over the 10 million price tag. Finally, if the relocation of Key West’s City Hall is any indication [$18.8 Million], the total cost for relocating the District’s administrative offices could be in the tens of millions.

And then there is the value of the land set to be generously ‘given away’. The Trumbo Road property is probably one of the most valuable buildable pieces of land in the County: Over 6 acres of prime waterfront property in downtown Key West. Peary Court, which is much larger but not waterfront, was sold for $60 million.

By the time the Trumbo Road property has been passed over to a ‘benevolent’ developer, the cost to the District, taxpayers and students could be $30 Million in relocation costs plus the loss of an extremely valuable asset.

As we’ve reported many times, “affordable” housing in Key West is, for the most part, market rate.

Under the most profitable use of the City’s mix-and-match affordable housing ordinance, developers can rent 87% their units at the “middle-income affordable” rate (today that means one-bedroom apartments for $2,576/month and studios for $2,254). The other 13% would be rented at the “low-income affordable” price is (one-bedrooms for $1470/month and studios for $1286/month). At these rates, if every unit were rented at its allowed maximum “affordable“ rate, the landlord would gross over $1 Million/month; $13 Million per year. [See the 2017 rental caps HERE and here is an example of a lawful breakdown for the proposed “Porches” project.]

Padget’s plan also calls for the City to wave density, parking and ROGO[BPAS] requirements as well as height restrictions.

School Personnel Surveys Show One-bedroom Rentals are Not in Demand

The School Board’s reasoning for giving away the Trumbo Road property has been that housing costs in the Keys are driving good teachers away. Last year 14 teachers reportedly left the Keys for this reason. We obtained a list of those teachers and began contacting them.

One of them is Karen Doyle. She was a Stanley Switlik 1st grade teacher. She’d worked for the District for 26 years. Ms. Doyle had recently separated from her husband and they’d had to sell their house. She told us she tried renting but decided it just made no sense to throw her money away each month. Even though she loved her job in the Keys, she relocated to Fort Myers where she could afford to buy a home.

Nicholas Carton, a former fifth grade teacher at the Key Largo K-8, told The Blue Paper he left because he found an administrator position in a school in New York. He also said that his plan includes home ownership rather than longterm rentals.

It appears that teachers, like most professionals who settle down, want to buy a home for their family. In an employee survey conducted in February of 2007, 57% of the 617 employees responding were found to own their own homes. A January 2018 survey shows that a majority of school district employees who do rent require 2 or 3-bedroom apartments. Of the 264 employees who responded, only 30 said they would be interested in renting a one-bedroom apartment. When asked if a 1/1 apartment would interest them if it rented for $1500/month, 75% said they would not be interested.

Yet the proposal which is making the rounds and getting head nods from government officials, focuses on high-priced, small-sized rental units: studios and one-bedrooms.

So why would the School Board consider giving away such valuable land [and spending tens of millions of taxpayer dollars to relocate] in order to build housing units that its own employees don’t want or need?

Before Hurricane Irma, School Board members met at an “administrative retreat”. The fate of Trumbo Road may have been decided there. Interestingly, 3 months after Mr. Padget made his project public, his concept of renting to “key-employees” was adopted by the School Board in their January 30th resolution.

But developers flying long circles over the School District’s land on Trumbo Road is hardly a new sighting. In August of 2007 the School Board selected a bid proposal by Ed Swift, Conch Train owner and developer, for an affordable housing development on Trumbo Road. Like today, the District entertained the idea of giving Trumbo away for free ($1/year rent for 99 years).

Swift’s project was much better adjusted to the teaching community’s needs. But that plan seems to have disappeared in the “hurricane recovery” feeding frenzy. It may be difficult in the near future to distinguish genuine efforts to assist the community from opportunistic attempts to exploit disaster-related insecurity, seeking free public land and blanket waivers of any restrictions or regulation of large-scale developments.

While the School Board plays monopoly, Monroe County’s high schools have a graduation rate of only 79%; lower than the state average (and much worse for minority students) and the Trumbo Road buildings, that could be used for a desperately needed vocational training program, are on the slab.

3 thoughts on ““Affordable Housing”: Are the Wolves at the Gate?”