Monroe County Historian Tom Hambright became a national celebrity of sorts last June when C-Span came down and interviewed him on TV. To see that 12-minute video, go to c-span.org.

Back in another life, one of the things I did to make a couple of bucks was to write history books for companies and organizations. All that was required was that they actually had histories (usually a couple of file drawers of old photos and documents)– and money to pay me and the printer. Clients included a symphony orchestra, a regional telephone company and a Bahamian resort. During a visit to Washington DC a couple of years ago, it was a real ego boost to visit the Library of Congress and see my books listed in the card file. (Yes, they still have card files at the Library of Congress, although almost everything is now computerized.)

The point of that story is to document myself as a history nut (although I prefer the term “enthusiast.”) And that leads us to the subject of the article you’re reading– a feature about one of the real treasures of Key West and the Florida Keys: The History Department at the Key West Public Library. Okay, I know that some of you might be rolling your eyes. Yes, longtime readers know that, over the years, I have specialized in investigative reporting. Scandal and corruption. And I didn’t find any of that in the management of the History Department at our local library. But read on. I bet you’ll learn a few things you didn’t know before.

If you are familiar with our library on Fleming Street, you may know that the History Department is located in one of the back corners of the building. But it occupies a sizable area– about half of which is a large fireproof vault– and offers what can only be called an eclectic potpourri of historical documents and artifacts.

The heart and soul of this entire operation is Monroe County Historian Tom Hambright, 77. Tom moved to Key West after a 21-year career with the U.S, Navy, retiring with the rank of Lt. Commander. He initially took a job with the Key West Art and Historical Society as curator of exhibits. (It just so happened that he has a degree in education and history from Appalachian University in North Carolina.) In 1985, he was named Monroe County Historian and took over management of the History Department at the library. The department had been established back in the 1960s by the Old Island Restoration Foundation.

I have worked with Tom for years on stories for the Blue Paper and the amazing thing about him is that he not only manages this collection of eclectic potpourri, he seems to know where everything is. For example, a few years ago I went to Tom and told him that I had heard a rumor that at sometime back in history, the military had dropped chemicals on the residents of Key West as part of a secret experiment to measure dispersal– information that would be useful in the development of biological weapons. I didn’t really expect that anything would come out of that meeting. But Tom simply got up and walked into the vault and came back out with a file of old newspaper clippings. Tom became a national celebrity of sorts last June when C-Span came down and interviewed him on TV. To see that 12-minute video, go to c-span.org.

Much of the information available in the History Department deals with, in one way or another, local family histories– like old tax and real estate records, for example. When I was there last week, they were scanning copies of U.S. citizenship records of Bahamian and Cuban immigrants to Key West dating back to the 1830s. Documents waiting to be scanned include death and burial records as well as Catholic baptism records. An “index” of local family names has also been developed over the years, referencing documents available in the library relating to these families.

Want to research old newspaper articles? The Key West Citizen is available on microfilm back to the 1920s. If you’re interested in really cool historical photos, check out the library’s website. Go to www.keyslibraries.org and click on Florida History at the top of the home page. 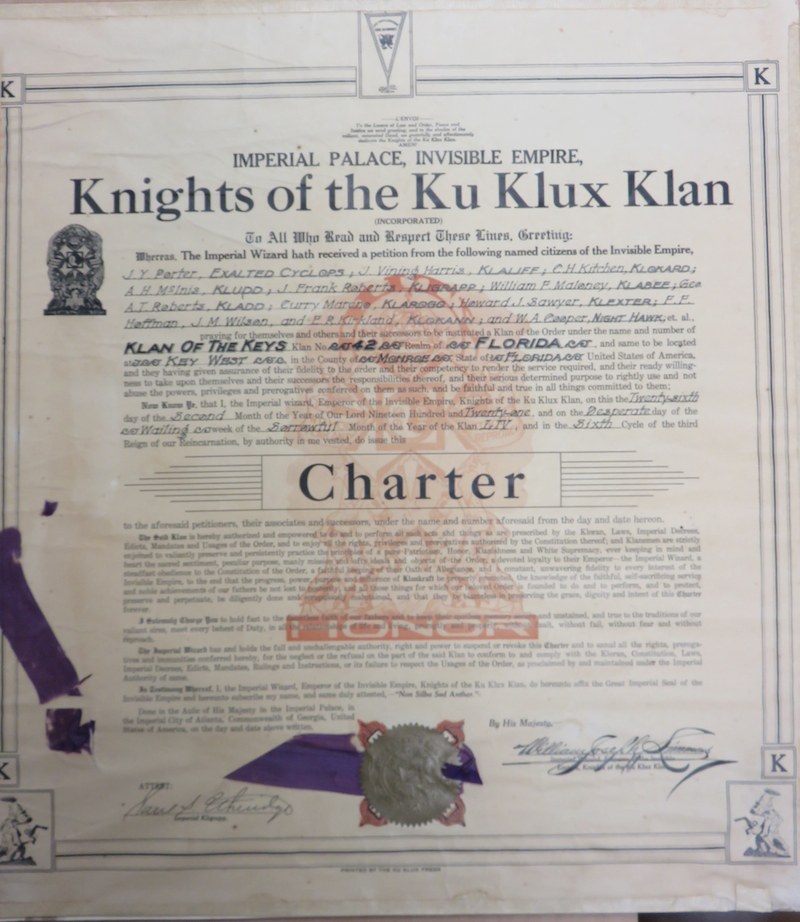 The rarest of the documents are kept in the vault. Among the most interesting documents I saw when I was given a tour was the original letter, hand-written in 1823 by Commodore David Porter, declaring what is now Old Town a city– but he named it Allentown, and he called the island Thompson Island. Obviously, those names didn’t stick. There are also old federal court documents relating to the regulation of the “wrecking” (salvaging) industry here in the early 1800s. Most of us know that the wrecking business existed here– but I, for one, was not aware that it was regulated by the government. Other records and and photos document the cigar-making industry, which employed as many as 2000 people here during the 1800s and into the 1920s. This was one of the most prosperous periods in Key West history. In fact, Key West was reportedly the richest city in Florida during this period.

Not surprisingly, the history collection at the library includes some interesting Ernest Hemingway memorabilia, such as a galley proof of Hemingway’s book, To Have and To Have Not, with his notes in the margins. According to Hambright, when Hemingway left his wife, Pauline, and ran away to Cuba with Martha Gellhorn, he reportedly stored some stuff– including the galley proof– with his friend Joe Russell at Sloppy Joe’s Bar. Some or all of that stuff eventually ended up in the History Department at our library. But Hambright points out that famous playwright Tennessee Williams lived in Key West longer than Hemingway. And he spoke at the dedication of the library’s auditorium in 1975.

Also in the vault is the original 1921 charter for the Key West Chapter Ku Klux Klan– which also says something about Key West history.

The History Department is open when the library is open– 9:30-6 Monday-Saturday.