In Quentin Tarantino’s 2003 film Kill Bill Volume 1, 95 people lose their lives in one way or another, most of them (76) cut down by Uma Thurman’s katana-wielding character The Bride. In Robert Rodriguez’ 2007 film Grindhouse: Planet Terror, 281 humans die, most of them gruesomely. No, I didn’t watch these movies with a counter in my hand clicking off each death. These numbers are easily available, believe it or not, at moviebodycount.com. While not blockbusters, both films were box office successes.

In the popular FX “true crime anthology” The Assassination of Gianni Versace: American Crime Story, we watch serial killer Andrew Cunanan dispatch five people, torturing some and then brutally murdering them all. Rotten Tomatoes rated the series as 85% Fresh, describing it this way: “The Assassination of Versace starts with a bang and unfurls slowly, moving backward through an intricate (and occasionally convoluted) murder mystery anchored by a career-defining performance from Darren Criss.” None of this is surprising or unusual. In 2007, New Scientist published a study finding “by the time the average child starts elementary school he or she will have seen 8,000 murders and 100,000 acts of violence on TV.” Who knows what that figure might be today, especially if you add in movies and books.

In Shakespeare’s history and tragedy plays, people die right and left. The Open Culture website catalogs the methods with its “74 Ways Characters Die in Shakespeare’s Plays Shown in a Handy Infographic: From Snakebites to Lack of Sleep.” Some of these methods were murderous (stabbed and poisoned, ripped apart by mob) and some were murderous and bizarre (buried to neck starvation, baked into pie). Two of the most prominent homicides were committed by Macbeth, who stabbed Duncan to death, and Claudius in Hamlet, who poured poison into his predecessor’s ear. The audiences at the time ate this stuff up.

Elizabethan and Jacobean audiences reveled in shocking drama. While patrons liked a good comedy, they consistently packed the theatres to see the newest foray into treachery, debauchery, and murder. Scenes of bloodshed were staged with maximum realism. An account of the props required for George Peele’s The Battle of Alcazar (1594), for example, lists three vials of blood and a sheep’s lungs, heart, and liver. Kyd’s Spanish Tragedy calls for an arbor with a dead body swinging from it. [Retrieved from Violence in Shakespeare: Suicide, Murder, and Combat in Shakespeare’s Plays.]

Early in the first book of the Old Testament (Genesis 4:1-18), “Cain rose against Abel his brother and killed him” out of jealousy because God appeared to favor Abel’s sacrifice over his own. 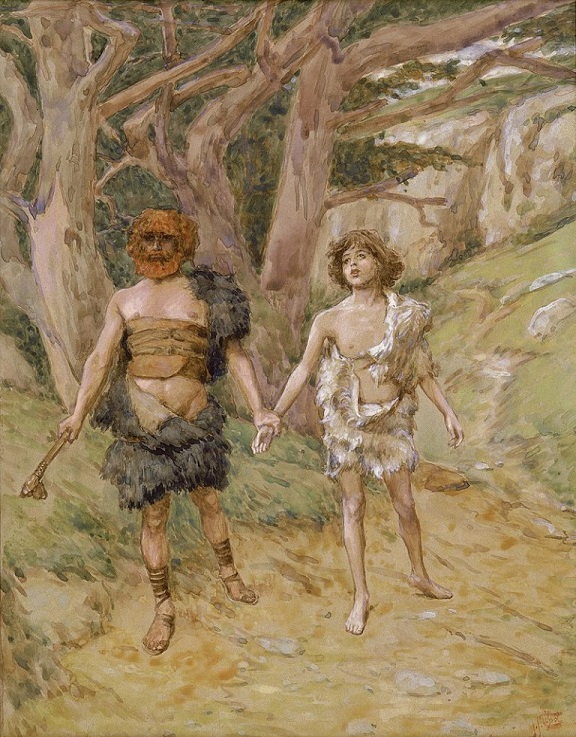 In The Iliad, the epic poem about the final year of the Trojan War published in the 8th century BC, Homer almost lovingly describes the deaths of combatants: “The sharp stone caught Hektor’s charioteer…on the forehead. It shattered both his eyebrows, crushing the bone, and his eyes fell out and rolled in the dust at his feet.” According to Greek Myth Comix, the named deaths in the story total 255, soldiers done in by rocks, arrows, swords, and spears. Since Homer’s time, his popular story of death and destruction has been retold numerous times in film, nonfiction, and fiction.

These are all pretty much examples from Western Civilization (loosely speaking). Other cultures likely have as many or more such “entertainments” of the deadly variety. If nothing else, they are indicative of our love/hate relationship with violence.

In The Crying Game, Fergus tells Jody the story of the scorpion and the frog, an animal fable that’s been around, some think, since the 1950s. In it, the scorpion convinces the frog to ferry it across the river, promising not to sting the frog along the way. Midway across, though, the scorpion does sting the frog, condemning them both to death. As they sink below the surface, the frog asks the scorpion why and the scorpion replies—one can almost imagine it shrugging as it does—”it’s in my nature.”

After horrendous incidents like the Parkland shootings, people look for someone to blame and some way to prevent this from happening again. Some point at the NRA; some at those who think it’s a bad idea for everyone to carry in self-defense. Some point to the violence of TV and movies. Some blame the news media for its morbid, ratings-greedy penchant for dissecting violent deaths endlessly and repeatedly. Some say regulate guns; some say do better at identifying people who might become killers and, at the very least, keep them from getting weapons.

But the truth of who is to blame for senseless deaths such as this is uglier and closer to home. The cartoon character Pogo said it best: “We have met the enemy and he is us.” Our history from inception, whether you take the religious view or the evolutionary one, has been one of violence. Our world is and always has been primal: a place of eat or be eaten, kill or be killed. We’ve managed, in some places and times, to mask this with a veneer of humanity, of respect, of consideration, of love and compassion. But it’s only a veneer and, as we’re shown every day, a fragile one at that. It seems the only real way to keep ourselves from offing each other is to somehow remake ourselves so that we are now longer us. Either that or time travel back 248 million years, confront the first Cartorhynchus lenticarpus to crawl out of the ocean and breath land air, look it square in the eyes, and say “Maybe you should rethink this.” I’m guessing you know which method I think has the better chance of success.