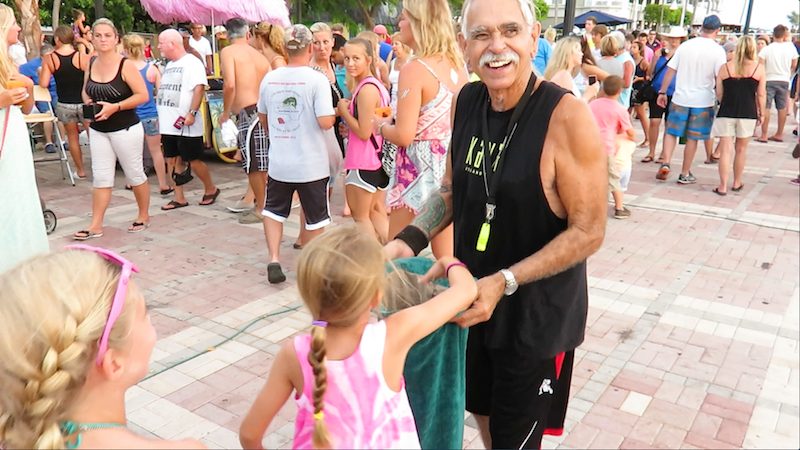 Key West’s daily celebration of sunset is famous around the world. Today, “going to sunset” is a must-do for millions of tourists who visit the Southernmost City every year. Lots of locals, too. And it’s more than just the spectacle of the sun sinking into the Gulf of Mexico, it’s also a festival, featuring street performers, a vast variety of arts and crafts, as well as food carts and more. But the celebration wasn’t always this elaborate. In the February 4, 1994 edition of Key West The Newspaper, writer Bud Jacobson revealed the true story of the founding of the sunset celebration in Key West.

“It was one of those balmy Sunday evenings in the mid-1950s,” Jacobson wrote. “Rex Brumgart was bored. But he felt he needed some quiet inspiration after a week of running the original concession stand at South Beach. So he packed a small carry-all with his ice-cold martini shaker, some Triscuits, a wedge of Brie and a spot of caviar and strolled down to the old city docks, lugging a beach chair and a small fold-up table under his arm. He picked his way down the old docks, a platform of rotting, water-soaked planks, dominated by the Champion Seafood warehouse, a major shrimp boat mooring. He nodded to the fishermen and to the dozens of cats and kittens sniffing around the fishermen’s bait. He chose a spot at the end and settled down. Opening his chair and table, he set out his cocktails and hors d’oeuvres and spent the next hour getting mildly smashed– as the sunset slipped closer to the horizon.

“The sunset was spectacular, a luminous golden red. Rex was so impressed that he stood erect, lifted a toast and called out, ‘Bravo!’ Several of the amused fishermen joined in. Rex shared his experience with several of his cronies and it wasn’t long before there was a regular group that met for ‘sunset’ every Sunday evening. They shared the latest gossip, laughed at terrible jokes and sipped cocktails while the sunsets dazzled them.”

Jacobson said that the original group of sunset worshipers included Earle S. Johnson, who owned the Oldest House for 30 years; Fran and Harry Howard from Nantucket, Pamela Hunt, Billy Bryant, Lyle Weaver, a popular jazz pianist; Liz Lear, of Key West Hand Prints; Morgan Bird, owner of the Oldest Bar; and himself, Jacobson. He said that the “celebration” soon became a small tradition, but the “members” spread the word carefully because, at that time, local law decreed no booze allowed between 6-9 pm on Sunday.

By 1984, the sunset event had grown to the point that at least some organization was required, so event participants created the Cultural Preservation Society (CPS), a non-profit corporation. According to the CPS website, Tennessee Williams initiated the ritual of applauding the sunset at Mallory Square, gin and tonic in hand. That may be true, too.