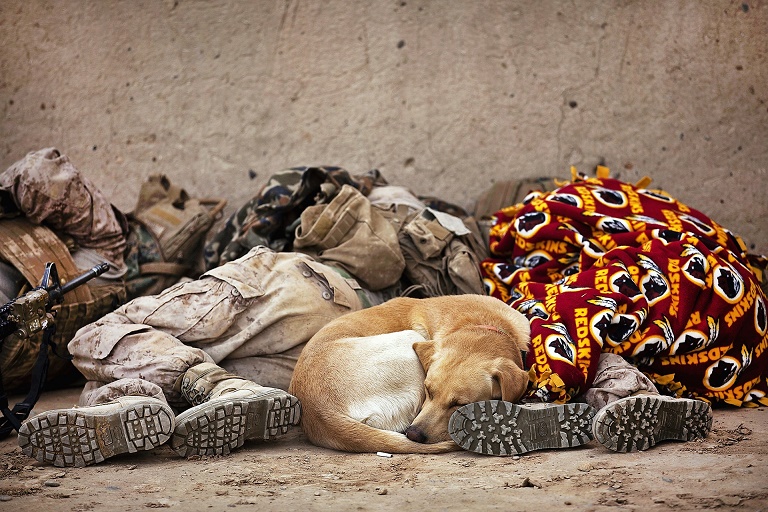 “Soldiers Nap With Their Canine”, by Jean Beaufort

If people recognize no force superior to their desires; then they must fight when their desires collide. Penetrating an eye socket with one’s fingers, so as to detach said eyeball and disable an opponent, might be the outcome from such collisions.

Syrian atrocities and “child murder” have been established as the new normal. Acceptable levels of violence and killing have become “standard operating procedure”, as long as such destruction appears to be occurring at a safe distance.

Indifferently disposed leaders and media moguls have orchestrated narratives designed to deflate this real time murder and genocide. Fraudulent and selective coverage of the ongoing slaughter in Syria, has darkened and diminished the world’s collective consciousness.

Academia and Elitism, for the most part, have done little to place the issue of “baby killing” before the public. They are reluctant to elevate this story to the forefront of their news cycles. It doesn’t fit their ideological pursuits.

Feigning ignorance of their agony, has not been blissful for these neglected citizens of the world. Many pundits and professors conveniently gloss over the realities facing these unfortunate human beings. They prefer spending their time on constructing hit pieces, regurgitating foolish and incoherent behavior afforded to us via the Trump, Obama, Bush and Clinton teams. They refuse to dirty their hands with the heavy lifting that comes with the Trust and Leadership inherent to their positions.

And then of course, we have our own “Syrian Type Uprisings” occurring in America’s 3rd largest city. In Chicago someone is shot every 2.84 hours. Chicago’s murder and slaughter rate is being conducted under the auspices of a Constitutionally elected government. At present, lawless cities of this magnitude have exceeded the number of Americans being killed in our 3 ongoing wars; Iraqi, Afghanistan and Syria.

Now I get it; we’ve become desensitized to innocent American children being routinely murdered in our country; so we’ve extended that courtesy to the children of other nations. Or, could it be the other way around? Either way, it appears that a cultural decline has devalued “Life”; leading the way to disinterest and lethargy when it comes to the suffering of others.

Perhaps, partial birth abortions and laws forbidding medical treatment to babies accidentally birthed during a botched abortion, have had something to do with the hardening of our hearts.

Forgive me, I don’t want to get too far off track. However, factual scenarios riddled with the slaughtering of children, infrequently appear on cable news and the front page of our nation’s newspapers.

A natural progression of this cold heartedness, might cause one to stand idly by and listlessly accept the creation of additional killing fields; as murder rates in their own country’s cities reach epic proportions. Sanctioning and legitimizing “individual and mass cruelty” has not made our communities and world a safer place. Exterminating “goodness, goodwill and common sense” from curriculum development and the halls of government, for the sake of getting along and not offending anyone, hasn’t brought peace nor a loving awareness into the world.

“Techno Junkies” unable to relate to themselves and fellows have exponentially exacerbated the societal rift and failings we suffer from. Imperfections and shortcomings not addressed, nor corrected, highlight the fundamental cruelty circulating the globe. The regularity with which we permit abuse and naively brutalize ourselves has an antidote, a clear and present remedy that’s effective, working every time it’s applied.

I shall not bore you with further details. Like yourselves, I’ve a dark side. I frequently perseverate upon myself, while seeking mindless activities to escape the pain of an unsettling reality. So much for my digression, just sit back and “let the games begin”.

According to “Business Insider” (3/31/17): “The Pentagon is no longer going to tell the public how many troops are in Iraq and Syria”. And let’s not forget about that pesky little place called Afghanistan.

Additional troops from the Army’s 82nd Airborne Division and the United States Marine’s 24th Expeditionary Brigade are described as readying themselves for battle. Observers suggest there are approximately 6,000 American troops interspersed on the Iraqi and Syrian boarders.

So let’s see what we have here; “war wise”. We’ve waged a 16 year undeclared war in Vietnam, another 16 year or so undeclared war in Iraq and a 15 year undeclared war in Afghanistan; without securing or winning anything. In and of itself, those facts are absolutely unbelievable. Such destructiveness, pain and loss for obscure, murky and poorly thought out political goals and objectives. A long line of American presidents and congressional leaders have disgraced and dishonored themselves, while wreaking havoc upon our world.

So many millions of children and innocent civilians killed, maimed and murdered. Countless numbers of my Brothers & Sisters Killed & Wounded In Action. It’s very difficult for me to reconcile with the fact that these killings and blood sacrifices may have occurred, for existentially nothing.

I’m sickened and infuriated by the pointless and ill-advised conduct sponsored by our government. We’ve learned little, if nothing; as we’ve set out on another course of military intervention, which appears to be founded upon the same half-backed and simple-minded strategies that have failed us in the past. Invading nations and killing their citizens to attain a political objective, has not worked well for us.

Defeating an opponent is not difficult. Securing a lasting peace is even less complicated. The Military Industrial Complex can be fed and reconfigured to do the profitable bidding of Self-Realized & Self-Actualized citizens world-wide.

Setting that aside; flawed assessments, misguided planning and the inability to adjust to unintended consequences; have plagued our myopic and ineffective foreign policy and use of force; regarding building consensus and subverting threats to our national security.

It’s apparent we’ve regressed as a nation in our abilities to analytically reason, accurately assess threats and formulate solutions. Of one thing I’m certain, if we buy our students additional computers and expand their use of the Internet, so that every child is plugged in; our nation and world will become a better place in which to live.