Letter To The Editor:

It was my family’s good fortune to attend the United States Marine Corps’ 240th birthday celebration. An energetic and riveted audience was treated to an extraordinary presentation by John Donnelly and Norm Higgins at the American Legion Post 333 in Key Largo.

The ceremony was compelling and captivating, as Mr. Donnelly’s powerful and inspirational message was delivered cogently and eloquently to a large audience, which had assembled for the event. Mr. Higgins’s brilliant rendition of the Commandant’s Message provided those in attendance with a glimpse of life, as a United States Marine.

Sherriff Rick Ramsay was recognized with a beautiful plague presented to him by Purple Heart Veterans that acknowledged the magnificent job that he and his deputies have done, protecting these combat wounded and disabled veterans, during their many rehabilitative bicycle rides through the Keys.

American Legion Post 333 provided a superb setting for the event. Mr. Paul Bean, manager of the Key Largo Publix, along with his outstanding Community Services Department in Miami, made certain all in attendance were treated to sumptuous foods and cakes, donated by the ‘Publix Team’. Their thoughtful benevolence and generosity was sincerely appreciated and never will be forgotten. Mr. Bean and the Publix Management team have sponsored this event for many years. 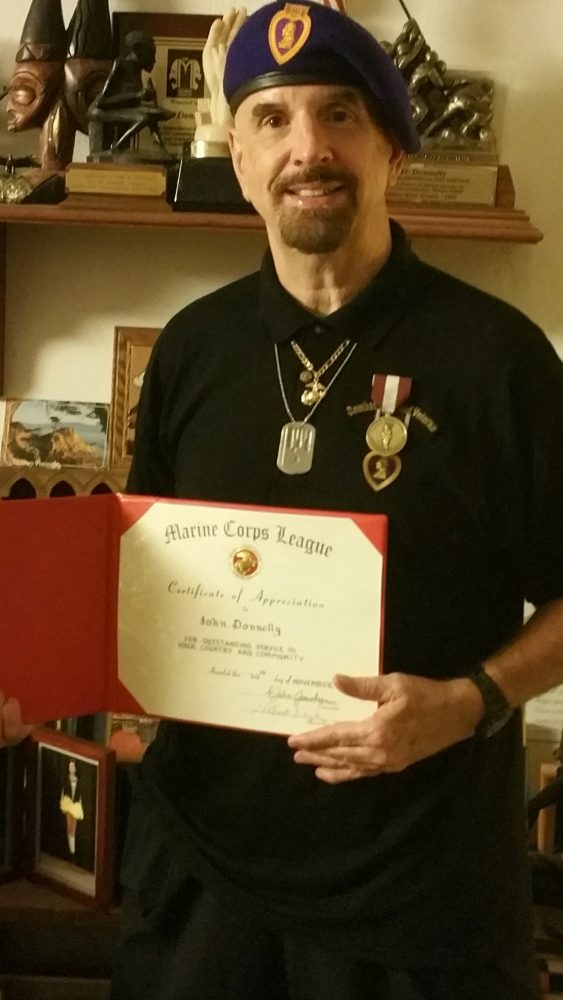 Marine Corps League representative Jake Jacobson, epitomized class and distinction, as he oversaw the cake cutting ceremony. In addition, on behalf of the Marine Corps’ Commandant, Mr. Jacobson presented John Donnelly with the “Distinguished Citizen Medal”, for his outstanding service to county and community. As identified by the presenter, Mr. Donnelly’s exceptional achievements on behalf of his fellow man and society were remarkable and profound.

A loving spirit of support surrounded this celebration. It was palpable. All races, colors, creeds and genders melded together to radiate a warmth and positiveness, which was authentic and comforting; allowing members of the audience to come forward and share their personalized experiences and encounters with United States Marines.

John Donnelly and Norm Higgins have perfected their orchestration and management of this popular and growing celebration. The magnetism and power of their personalities are a force for good in the world.