Today, a study in trump. First, because our president’s trip to Europe and meeting with Putin is trending #1 right now. And second, and more interestingly (one hopes—this “one” especially), because the word itself, without the still-waiting-for-him-to-be-presidential association, is curious in its own way. The first known use of trump, supposedly an alteration of “triumph,” occurred in 1529, according to Merriam-Webster, in conjunction with “sense 1A”: “any of various cards and usually all the cards of a suit designated by chance or by an auction or declaration that if legally played will win over a card that is not of that suit.” Phew. That’s more than a mouthful. 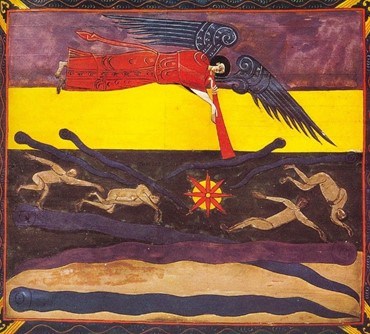 The name “Trump” also has a history outside of our president. For example, it belongs to a Marvel comic book character. His street name is Carlton Sanders and his claim to fame or infame (or is it famy and infamy?), as it were, is being “a heist man who uses stage magic to commit crimes.” Hmm. On a side note, there is a new Marvel villain named MODAAK, which stands for “Mental Organism Designed as America’s King.” Guess who he looks like. Hmmmmm.

Then there is the humor magazine named Trump, edited by Mad Magazine‘s Harvey Kurtzman and published by Playboy founder and bunny-scourge Hugh Hefner. It folded after only two issues. Hmm again. Let’s see. What else? There’s the Trump Islands—small, barren, forlorn, cold, somewhere off the barren, forlorn, frigid coast of Antarctica. Hmm thricely. And the slang meaning of trump: noisy flatulence. Hmm quatroly.

And finally, there’s “the last trump,” a phrase from 1 Corinthians 15, which goes like this:

Behold, I shew you a mystery; We shall not all sleep, but we shall all be changed,

In a moment, in the twinkling of an eye, at the last trump: for the trumpet shall sound, and the dead shall be raised incorruptible, and we shall be changed.

The passage seems obtusenetrable [impenetrably obtuse] until you figure out (this took me awhile) that “corrupt” in this context does not mean someone “perverted into a state of moral weakness or wickedness” but rather the archaic “tainted by decomposition or rotting” and that “corruptible” means capable of decomposing rather than capable of being perverted. So, put simply, “the last trump” can be characterized as the final wake-up call for humans, which, when you think about it, may also be the case for “the last (fingers-crossed) Trump.” Let’s just hope we all don’t sleep through it.