I read recently that the Totten Glacier (TG) in Antarctica may not be long for this world. Described in a Verge article by Alessandra Potenza as “a sort of canary in the coal mine,” the TG, located in East Antarctica, “contains so much ice it could raise sea levels by at least 11 feet if it all melted—and research now shows the ice is retreating because of warmer-than-usual waters brought by strong winds.” (If you need a climate-change chill, these animated maps from The New York Times demonstrate how the ice is moving toward the sea.) Given that our house in Key West sits at the whopping height of eight or nine feet above sea level, this gives me major pause for concern. Should TG melt, I would be sitting here at my desk with waves gently, one hopes, breaking over my lap as I type. In total, the Antarctic ice sheets contain 60% of the world’s fresh water. Scientists fear that the ice may now be in the early stages of unstoppable disintegration.

Okay. Melting Antarctic ice has now moved up on my prioritized inventory of things to lose sleep over, joining with melting Arctic ice and melting ice on Greenland in the top 20. (My list is up to 200 or so now I think). To add insult to injury, or perhaps anxiety to worry, I ran across an Atlantic article by Robinson Mere that asks “what lurks in the Arctic’s thawing permafrost?” The article title answers the question: “The Zombie Diseases of Climate Change.”

So, here’s the story. Greenland wants to say sayonara to Denmark, of which it is still a territory. To do this, Greenland needs an economy. Agriculture is out. Fishing is probably out. So that leaves mining and oil and gas drilling. Geographically, Greenland has an ice sheet that covers most of its middle. Around the edges, where the population of 57,000 lives, are hills, valleys, and fjords. All except the fjords are covered in turf, which deep down has been locked in permafrost for 35,000 years or so. Mining would dig up much of that permafrosted turf, exposing its materials—which include the biomass of dead plants, dead animals, and mosses—to warmer temperatures. (As one scientist described it, “At once, you are going to excavate 16 million tons of permafrost that has not been moved or perturbed in a million years or time.”) After excavation, thawing would ensue. Problem one: this process releases methane into the air, adding to our already excessive greenhouse gasses. Problem two: it also releases toxins like “bacteria and viruses long immobilized by the frost.” “Climate change,” writes Mere, “could awaken Earth’s forgotten pathogens.”

Among these are what’s called “monster viruses.” They are monster because they are large enough to be viewed by regular microscopes, something to which most viruses are invisible. One of these found in Siberia and so named Pithovirus sibericum is described as a “massive ovular virion that survived 30,000 years frozen in the ice core. It was also the largest virus ever found.” Viruses are not alive or dead, hence the “zombie disease” mentioned in Mere’s title. Their sole purpose and programming is to vamporize normal, healthy cells for their protein factories and replicate. One virion, Mere tells us, “can make tens of thousands of copies of itself nearly instantly.” Some of these pathogens we know, like smallpox; others we may not. As the above-referenced scientist observes, “No one really understands why Neanderthals went extinct.” This kind of thing is, Mere asserts, one of the “unsettling portents of climate change.” He then concludes,

Whether the emergencies of the coming century arrive in the form of fires, or floods, or plagues that rise invisibly from the ground, they’re likely to become more and more extreme and less and less familiar—a fantastical parade of crises we will be shocked to find ourselves battling. Even in its quietest places, the world will become newly hostile.

Well, after all this cheerful information, I’m in need (and you likely) of something to brighten my mood. Either that or a stiff drink. Maybe a joke will help. Let’s see. Question: How many climate-change skeptics does it take to change a light bulb? Answer: None. It’s too early to say if it needs changing. Um…drink it is then. 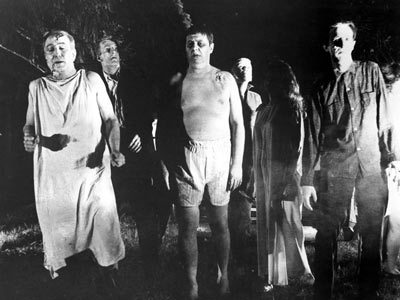