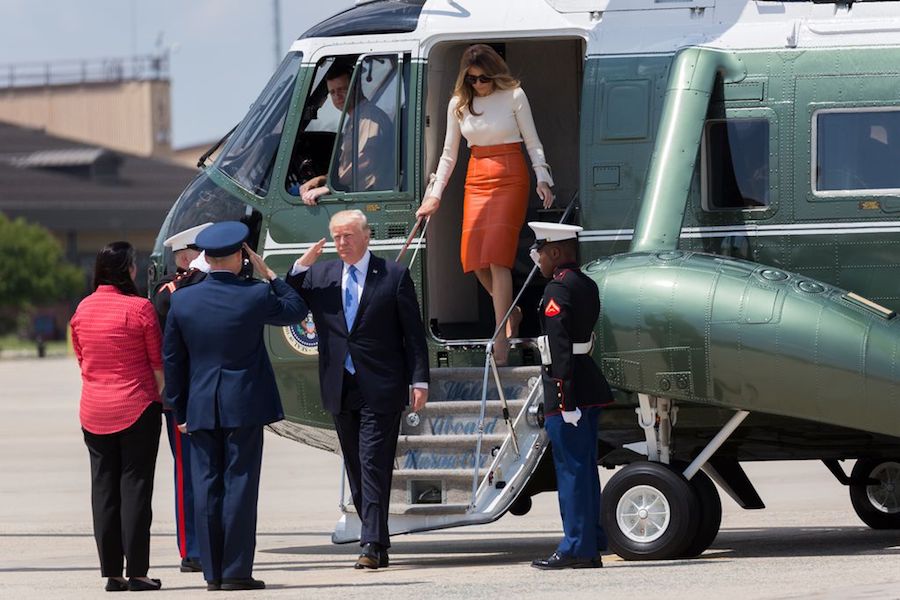 President Donald Trump salutes as he and First Lady Melania Trump arrive aboard Marine One, Friday, May 19, 2017, to Joint Base Andrews, MD, for the start of their overseas visit to Saudi Arabia, Israel, Rome, Brussels and Taormina, Italy. (Official White House Photo by Shealah Craighead)

On September 5, the New York Times published an op-ed supposedly written by an anonymous official within president Donald Trump’s administration. The snobbish and self-serving hit piece paints Trump himself as dangerously immature, incompetent, and unstable, while reassuring us that “adults in the room” are working tirelessly to keep his worst impulses in check and save the republic without tedious formalities like invoking the 25th Amendment and removing him from power.

The op-ed itself was a jejeune and mediocre example of a time-honored American pastime, talking smack about one’s boss behind his back. On its own terms, it deserved at most a brief period of public mockery before fading away to something less than an historical footnote.

But then Trump responded swiftly and decisively from his favorite bully pulpit, Twitter.
“TREASON?” he thundered. “If the GUTLESS anonymous person does indeed exist, the Times must, for National Security purposes, turn him/her over to government at once!”

In a few short outbursts, Trump managed to confirm all the op-ed’s worst characterizations of his temperament and mental state.

As for the alleged internal “resistance” the anonymous writer claims to belong to, it seems to have fled the scene. Cabinet secretaries quickly lined up to plead their innocence of any involvement, playing  Bukharin to Trump’s Stalin. Who wrote the op-ed? Someone by the name of “Not Me.” An internal administration manhunt (womanhunt?) has allegedly launched to unmask the evil-doer.

Treason is defined in the US Constitution in terms of levying war on the United States, not in terms of claiming to be your boss’s babysitter. As best I can tell, the rest of federal criminal law is also silent on the media-boosted equivalent of disrespectful water cooler talk.

Nor does any plausible version of “national security” extend to punishing speech of this sort.  Calling the president names and affirming an already widely held impression of his fitness for office may further damage his personal reputation (if that’s even possible), but it doesn’t damage the US as such.

These over-the-top responses from Trump and his loyalists, on the other hand, suggest that the cancerous growth long decried as “the imperial presidency” is metastasizing into even more dangerous form before our very eyes. It’s the Reichstag fire, minus even the excuse of an actual fire.

The 25th Amendment doesn’t sound quite so over the top now as it did a week ago. Unfortunately, its beneficiaries would be the same gang minus their current leader.

TELL US WHAT YOU THINK IN THE COMMENTS SECTION BELOW ….