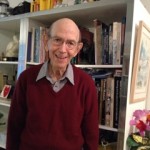 For the first time in years, if ever, Congregation B’nai Zion is sponsoring a concert that is not about Jewish klezmer, liturgical, Hebrew or folk music. On Sunday, April 19 at 4 p.m. the original songs of congregant Bernie Kaplan will be performed by professionals Eric Haley on vocals accompanied by Michael Robinson on piano.

Nancy Hoffman, who performed the nonnative surgery to get the tunes out of Kaplan’s head, where they had survived for up to 50 years, will narrate the concert, explaining the process of birthing the songs. The concert is free and open to the public. A reception will follow.

Kaplan, a graduate of Key West High School and the University of Florida, traveled for years throughout the South as a sales representative for Doubleday. On the long automobile trips, he wanted to listen to the radio but disliked the country music that dominated the airwaves. “Too much tears and beers,” he said. So he started writing his own songs in his head. Titles and at least partial lyrics got written down along the way, but Kaplan doesn’t notate music. One ditty, about his Studebaker Lark, which he sang to them, received a positive hearing from company officials and was close to deal for a commercial but, unfortunately, they then ceased production of the Lark.

The composer also worked for Doubleday as a field editor and authors’ escort and later as a literary agent. It was only after he retired and came home to Key West that he thought about getting his songs down on paper and properly arranged, musically. But until recently only one was written down, in 2004, by late concert pianist and professor Franco Richmond.

Then two years ago Kaplan found snowbird performer and songwriter Nancy Hoffman and gave her “two envelopes containing 70, 80, perhaps even 100 songs,” she said.

The rest, as they say, is history.

Kaplan’s younger sister, Mae McMahan, showed Hoffman a poem by her brother. “But whatever happens, however things turn,/ there’s one thing that’s constant, one thing to learn./ In those moments it seems all your dreams lie in tatters,/know that you’re loved, for at heart, that’s what matters.”