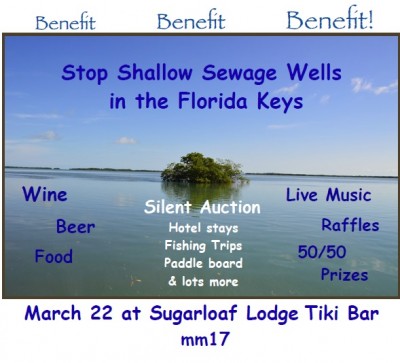 What’s wrong with Shallow Sewage Wells in the Florida Keys?

Well, do you enjoy seafood, diving or snorkeling, fishing, bird and marine life?

We’re about to start swimming in sewage effluent.

Our County Commissioners are refusing to pay for a Deep Well to dispose of more than 30 million gallons a month of partially treated sewage effluent. Instead, they want to use four shallow wells cased only to 80 feet into the porous limestone of the Cudjoe Regional Wastewater Treatment Plant. It will rise to the surface quickly.

We’ve already been taxed for it and County Commissioners admit they have the money.

Why are they risking our water quality so they can pay for somebody’s pet project?

“It will rise quickly to the surface waters,” says Dr. Todd Kincaid, well-known hydrogeologist and cave diver. “And when it does, it will cause algal mats, which kill corals and other marine invertebrates, impair our fisheries, and degrade our water quality,” adds Dr. Brian Lapointe, a well-respected marine biologist. Dr. Lapointe has a home in Big Pine Key and has been studying the effect of sewage effluent on our near shore waters for more than 30 years.

“The Environment Department has already warned us that shallow sewage wells often don’t work,” notes Jerry Tinnell, a volunteer event organizer. “Why would we risk our water quality?”

“We’ve already been taxed for the sewer project. Commissioners admit they already have the money. We need to tell them to spend it on the Deep Well instead of some pet project,” says Camille Blatz, another volunteer event organizer.

Two local commercial fishermen, Mike Laudicina and Don DeMaria, have filed a legal challenge to the permit issued for the four shallow wells. The benefit is to raise money for the legal costs of that lawsuit and to convince County Commissioners to fund the Deep Well for Cudjoe.

The local group, Stop Shallow Sewage Wells in the Florida Keys, is holding a benefit to raise money to stop the shallow sewage wells on Cudjoe Key. They plan a fun event with great prizes, great music, and great people.

$10 buys you entrance and a chance at some great give-aways. You can buy tickets on line or at the Benefit for food, drinks, raffles and the knowledge that you’ve helped an important local cause.

Details and tickets at www.stopshallowsewagewellsintheFloridaKeys.com. Or at the Benefit.