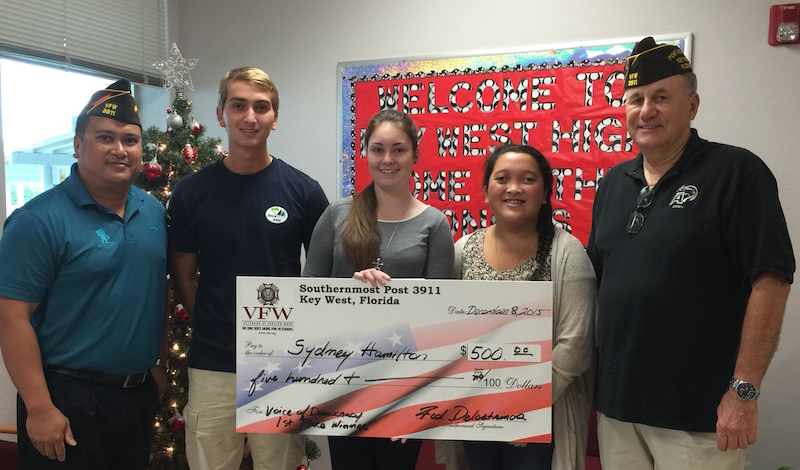 Sydney Hamilton, a senior at Key West High School was named the VFW Southernmost Post 3911’s first-place winner and recipient of the $500 award in the 2015-16 Voice of Democracy Scholarship program. Hamilton’s audio essay (your listening to it now) was then judged at the VFW Department of Florida District 5 and awarded 2nd Place.

Around 40,000 students in grades 9-12 participate in the “Voice of Democracy” audio-essay competition that requires entrants to write and record a three-to-five minute essay on a patriotic-based theme. “My Vision for America” was this year’s theme. The National Association of Broadcasters (NAB) started the Voice of Democracy Scholarship program in 1947. The VFW became a national sponsor in the late 1950s and assumed sole responsibility for the program in 1961. The competition was created to provide students grades 9-12 the opportunity to express themselves in regard to democratic ideas and principles. The VFW awards more than $2 million in scholarships every year. Other local winners include Key West High School students—2nd Place: T.J. Carbone; 3rd Place: Felicity Delostrinos 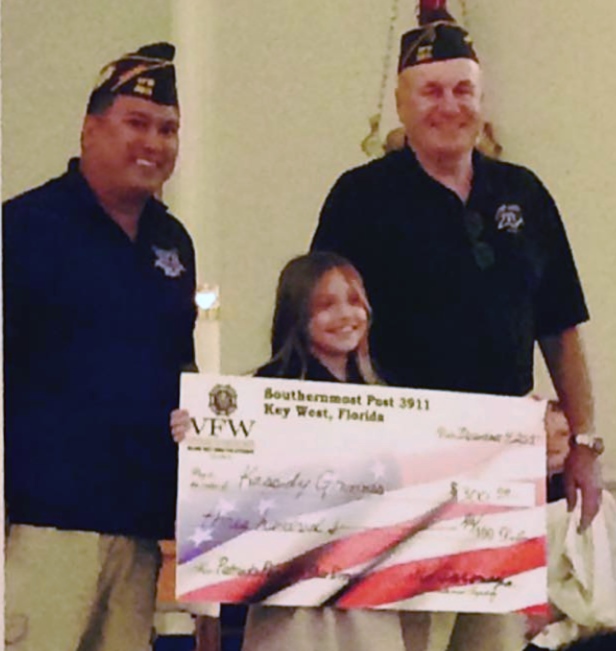 The VFW Southernmost Post 3911 is also pleased to announce that Kassidy Grooms, a 6th grade student at the Basilica School of St. Mary Star of the Sea, is the local post’s first-place winner of the VFW’s 2015-16 Patriot’s Pen Youth Essay Competition and recipient of a $300 award . She was also selected as the 1st Place Winner at VFW Department of Florida District 5. The winning essay was based on this year’s theme, “What Freedom Means to Me.” Grooms’ essay will compete at the VFW Department of Florida (state) level in January on its way for national judging and a chance at the first-place prize of $5,000 and a free trip to Washington, D.C.

The contest is a competition that gives students in grades 6, 7 and 8 the opportunity to write a 300- to 400-word theme-based essay expressing their views on democracy while competing for worthwhile awards and prizes. The VFW enacted the Patriot’s Pen Youth Essay Competition in 1995 as a way to encourage young minds to examine America’s history, along with their own experiences in modern American society while improving their writing skills. Sugarloaf School produced the other local winners—2nd Place, Zoe Winemiller; 3rd Place, Harrison Simmons.

The Post would like to thank this year’s judges—Kate Bauer-Jones, Jeff Frost, Gayle Glover, Phyllis May, and Steve Torrence. Both competitions used a blind judging process where no names of the entrants were shown. All essays were evaluated using a three criteria scoring rubric.