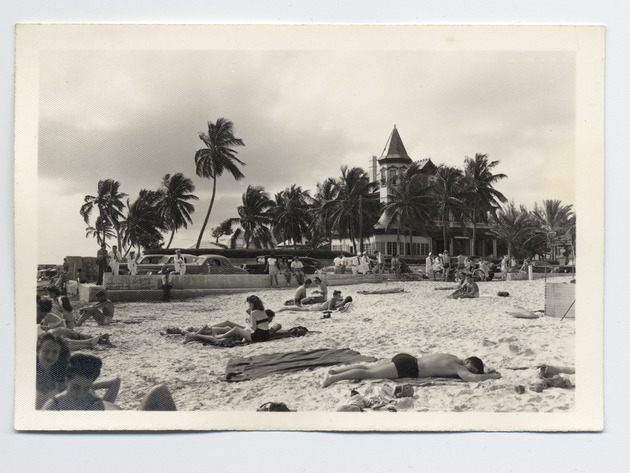 There was cheering, clapping, laughter and heated exchanges at Tuesday night’s City Commission meeting about the creation of a park at the south end of Duval Street.  Michael Halpern who with his partners would develop the new park with restaurant “consumption areas” was at his best, haranguing the crowd and shaming opposition from Commissioner Weekley:

The 10-year lease was approved.

And then this happened:  A soft-spoken man came to the podium to seek the renewal of a lease on South Beach. David Danieli, who represents Southernmost Beach Café, is Halpern’s partner in constructing the Duval park.

“It started out as this will cost us $300,000 – can we each kick in $150[000]? We’re now getting some really big numbers out there……Michael keeps making promises that we’re going to be solving issues in the sea and drainage problems and stuff like that, and I’m not sure I can afford to do all that.”

So, are the City’s private partners already at odds?

Commissioners appeared unfazed by the risk that our end of the bargain could suddenly be downgraded by some $700,000.

And since Southernmost Beach Café will no longer be putting its tables and chairs in the park area (instead, 45 additional seats will be added to the Café lease) will they be willing to pay for half of what Halpern promised?

“I’m committed to working with Michael on this, but I don’t have a pocket that I can just continue to take out money,” said Danieli.

We took a look at some other leases the City has signed with private businesses.

Interestingly, the Tropical Shell & Gift lease for property at Mallory Square was also before the Commission on Tuesday. That lease includes an Exhibit spelling out precisely the tenant’s obligation to spend $559,900 on improvements for, among other things: fire sprinkler systems for both the Shell Warehouse and the Shipwreck Museum buildings and a new acrylic tank for the Aquarium.

While it is typical for City leases to include a “percentage rent” in the form of a percentage of gross sales, leases also generally have a fixed base rent or a minimum rent due at the end of the year.

Yet the Duval Pocket Park leases are silent on minimum cost of improvements and lack detail as to precisely what those improvements must be. There is no base rent or minimum rent in Halpern’s lease and there is no conflict resolution provision, should the partners disagree.

A person close to the deal told The Blue Paper that these leases needed to get signed now for fear that the voters would soon deliver a Commission less favorable to big business. (Commissioners Sam Kaufman and Jimmy Weekley voted no on the development plan and the Halpern lease.)

Keep reading for a more detailed analysis of the approved agreements ….

Tropical Shell and Gifts, Inc is required to spend $559,900 over the next two years to improve City owned property in order extend its lease for 10 more years:

“Lessee agrees to make the improvements shown on the attached Exhibit B, or an equal dollar amount of improvements that would be approved by the City of Key West (such approval shall not be unreasonably withheld), within twenty-four (24) months from the date of this Second Amendment.”

The Tropical Shell and Gift’s Inc lease requires TS&G to pay either 10% of gross sales or a minimum rent of $25,000 per year (whichever is greater).

So, what about the Duval Pocket Park deal?

What specific physical improvements will be required and how much are the tenants obligated to spend? Well there is no “Exhibit B” and there is no mention of costs anywhere in the agreements but here’s what we did (and didn’t) find:

Fixing flooding issues at the end of Duval was Halpern’s selling point for this project, yet details about what engineering alterations must be undertaken to improve drainage are not outlined in the agreements. The lease refers to the approved development plan which states only,

“the proposed grades will accommodate drainage requirements of the Pocket Park and South Street right-of-way.”

While the leases do require that the tenants gather up the masses of seaweed that come ashore each day at the foot of Duval, the City will continue paying the costly fees for carting it away.

Halpern told Commissioners on August 7th, before they approved his development plan, that he had a remedy: baffles.

“The solution has always been to push that seaweed away from the beach and out to sea. That’s the solution and we’re willing to take a go at it.”

But nowhere do we find a written requirement for the tenants to do so.

How much rent will be paid?

Many residents who voiced opposition to privatizing the end of Duval pointed to the City’s loss of over $100,000 a year in parking fees. Whether the new restaurant use would generate more or less revenue than the current parking was an important consideration.

Halpern told Commissioners he estimates his sidewalk café operation will pay the City “a couple hundred thousand dollars a year in rent.”

But what does the lease say?

Halpern’s ten-year lease for 1,750 square feet of “consumption area” in the park will require a monthly payment of 6.5% of gross sales. Halpern expects to have 116 seats available for patrons.

The lease does not require any additional base rent or a minimum rental payment.

The Southernmost Beach Café lease requires a base rent of $350,000/year. This is for the existing 150 seat restaurant and the new 45 seat outdoor consumption area that is part of the pocket park deal. The Cafe is required to pay an additional 6.5 percent of gross sales above $5,384,615.38/year.

The Commission decided last Tuesday to allow the Café to begin installing and using their new seating area before the pocket park is completed. The intent is to begin generating revenue for the City that would otherwise be lost during the park’s construction phase.

At Tuesday’s meeting it was also stated that if the Southernmost Beach Café doesn’t keep their end of the bargain (by providing an unknown amount to fund the park) the new consumption area including the 45 seats will be required to be removed.

How much free public seating will there be?

The number of benches for the public vs the amount of seating at the café had been a major concern. Commissioner Sam Kaufman and Michael Halpern had even gotten a bit heated over this issue at the August 7th meeting.

“Might I suggest staff negotiate with the concerns that they have regarding a specific number to bring back to you in that lease agreement, that will be subsequently debated at that time.”

The lease reviewed and adopted by Commissioners on Tuesday, however, does not specify the number and placement of benches for the general public. It simply says,

“a portion of the park shall be set aside and equipped with park benches, some of which shall afford an ocean view, as approved by the City Manager and HARC to accommodate members of the public not wishing to eat or drink while visiting the park.”

Commissioners left it at that.

What does the promised “Environmental Component” consist of?

One provision the City demanded was “an environment component to the agreement.” But what that meant was not clear.

“There’s a thing called a living shoreline,” said Planning Board member Ed Russo (during the June 21st Planning Board meeting), “When you see that sign that says Key West Marine Park, there’s pictures of starfish and crustaceans, and other things sea squirts, and sponges, it’s really great but they’re all gone. So, what I purpose to you [Michael Halpern] is that you work with Reef Relief or another environmental organization to provide a living shoreline there.”

Halpern told the City Commission on August 7th, before they voted in favor of the development plan, that he would work with Russo to incorporate an “environmental component” into the project.

The lease does require “the installation and maintenance of water filtration apparatus in the catch basins installed or existing in the 1400 block of Duval Street.”

Locals have long complained that the black fence that is currently located adjacent to the sidewalk on Southernmost Beach Café property gives the impression that the beach area is privately owned. Halpern suggested that the fence be removed to create a more open and inviting feel for the beachside park. During the August 7th City Commission meeting he offered to be responsible for its removal.

On Tuesday it was confirmed by City staff that the black fence will come down, although the City did not take Halpern up on his offer to foot the costs.

Making it Clear the Area is Open to the Public

“I will suggest through the course of the lease agreement that there be adequate signage to make sure that the public is aware that it is a public beach and a public park.”

The lease does not specify that the tenants must maintain signs indicating the area is a public park and beach; however, one of the conditions of the development plan is that one sign must be installed that reads “Duval Street Park – Open to the Public.”

One Response to “South Beach: Leases Approved but Did We ‘Get Had’?”