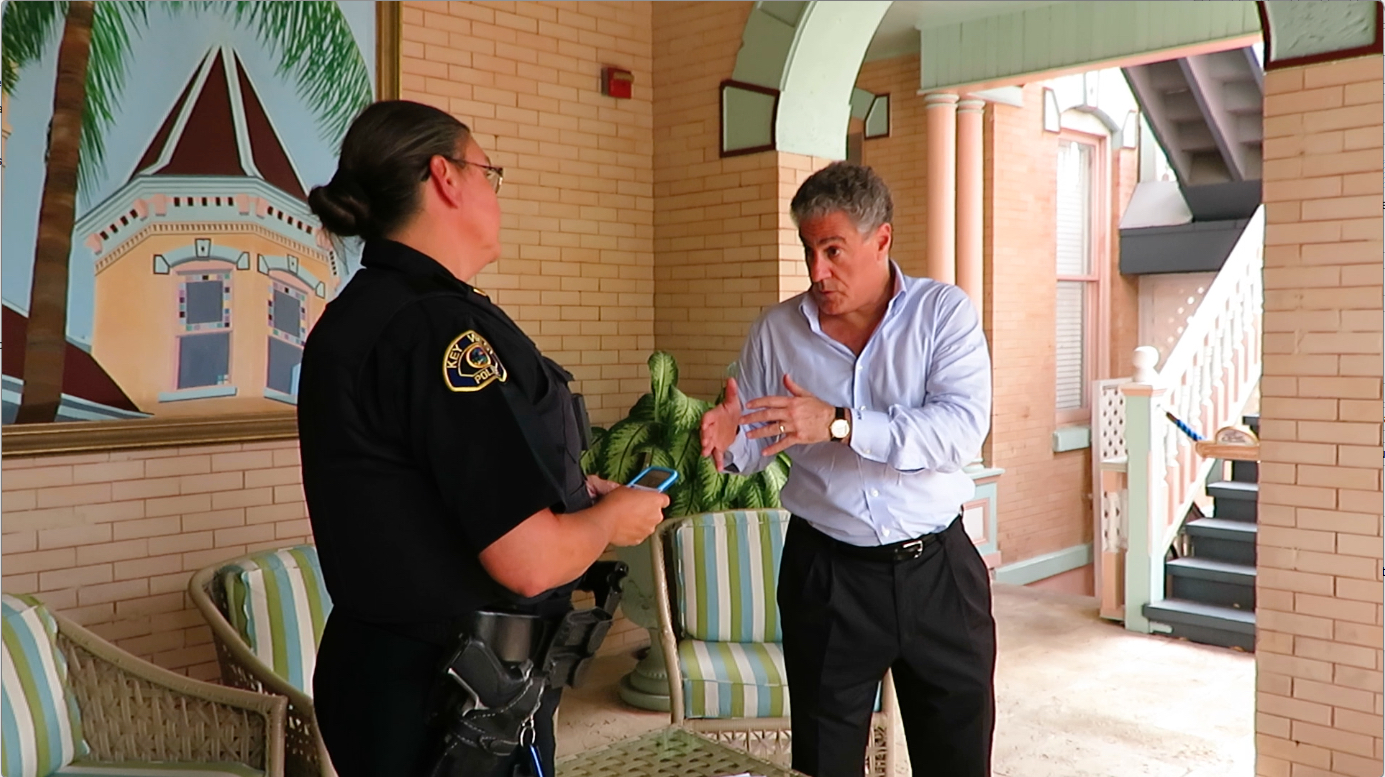 If you are like us you’ve probably always wanted to take a tour of the iconic Southernmost House. Well yesterday we were called on a tip to go there and report on a mysterious “big story.” Police cars were already parked at the gate but surprisingly we were allowed inside. Ah! Amazing sculptures and paintings, trompe l’oeil ceilings painted like the sky, infinity swimming pool suspended over the turquoise ocean view. Priceless.

But what was going on?

If we got this right, sometime during the night (Wednesday) the representative for the owner of the house kicked out the manager and its employees. “They are fired. I fired them. That’s all!” said Michael Halpern, who is the agent for Southernmost LLC, the property owner. But as it turns out the “manager” is in fact REMINGTON LODGING & HOSPITALITY, an enormous conglomerate registered in Delaware. It manages and also owns many hotels all over the U.S. For example, Remington runs the La Concha in Key West as well as the Pier House.

The management contract it signed with Southernmost will not expire before 2019. Apparently when headquarters heard what had happened in Key West, Remington sent its employees back in. Headed by a Miami lawyer they took back the hotel. At which point Mr. Halpern told them they were trespassing and he called the police.

We’d been called in by the Remington side of the story. Seeing all those smartly dressed people all recording Mr. Halpern with their cell phones gave us the vague impression that we were part of a set up; that somehow they expected the fiery local lawyer to “lose it”, make some threats, and it would all be on video for the enjoyment of social media mongers.

During the bizarre charade going on at the old victorian mansion the employees we talked to felt torn like the children of a divorce. The ones faithful to Mr. Halpern said Remington had always made it plain to them that employees meant nothing and that money was king.

Those complaints echo the growing local disenchantment with the town’s overheated hotel industry: publicly traded companies have been remodeling and merging mom and pop hotels at record rates. In the month of October of 2014 alone $140 million worth of hotel rooms changed hands in Key West. New cutthroat management styles often clash with longtime local employees. They are replaced by workers with temporary visas. The large number of those so-called “student workers” help keep the salaries low while the rents are climbing ever higher.

“I love the place and I love our guests,” says Natalie, who works the front desk in the Southernmost House lobby, “I wish the management, wherever it is, could share that with me.”

“Bottom line,” said Micheal Halpern, “I want my employees treated right and I know now that with Remington it’s never going to happen. So they’ve got to go.”

It was easy to see that morning where things could get out of hand. But KWPD officers Carter Simms and Julio Gomez impressed upon the two high-flying lawyers the same unflinching authority they probably use on drunken Key Westers. He confined the Halpern clan to the inside of the house while the Remingtons had to wait outside. When the final word came down from the City Attorney, the police escorted all of the Remingtons off of the property.

It was probably only a very temporary victory, but Halpern definitely had David’s biblical smile on his face.

UPDATE:  On Friday Remington’s Southernmost House hotel general manager, Joseph Dantoni, returned to the hotel property and after refusing to leave, claiming rights under the management agreement, was arrested and charged with trespassing.

4 Responses to “Showdown at the Southernmost House”