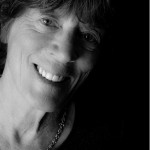 Bonnard’s Dog, just out, offers fifty excellent poems by the estimable Key West poet, Rosalind Brackenbury, just about to become the next Key West Poet Laureate. This collection is a riff on the 1917 painting by Henri Bonnard of bathers, bugs, a man sleeping, and his dog in a hot Provencal landscape. Brackenbury’s light, firm, persuasive poetic voice opens up a whole range of such emblematic experiences–people, and places, times and conditions, situations and resolutions. 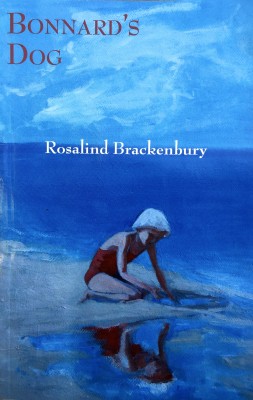 Brackenbury is so good at what she does, you forget that, as “poems,” you might be expected to admire them from afar. Rather, you find yourself responding whole-heartedly to each one, drawing us into an ever-broader perception of what each has to offer. Bonnard’s Dog feels like conversations you might pick up again and again, to enjoy Brackenbury’s distinctive perspective and strong voice, with its precision and its evocative smile. In fact it’s intoxicating, like a favorite wine that brings a glow, another sip, a slight buzz, a breeze that stimulates your senses, imagination, and thinking. Bonnard’s Dog, Brackenbury’s eighth book of poems, not to speak of her twelve novels and uncounted articles and reviews, once again brings our attention to often-otherwise-unnoticed parts of our world. She quietly but forcefully engages us with clarity of vision and strength of feeling. She dedicates her book to the poet Allen Meece, her husband, whose stay far away in a VA hospital she writes of movingly.

Brackenbury’s opening invocation, “Getting on with the Game,” declares the book’s direction: “Perhaps the game is simply/playing life at all its registers…/each day’s entry…/…naming it, again and again.” Her language has something of Marianne Moore’s careful description or Elizabeth Bishop’s down-to-earthness. But she is without their reserve, their implied if faint social distance. On the other hand, she avoids the self-centered. Instead, she as an appealing touch of (self-)deprecation, recognizing poetry’s limitations, too, and her partiality for the dailiness of things. But writing with much warmth, she gives us the enormous range of her poetic vision. And she does this in her conversational language, her varied rhythms and line lengths, nothing formal, nothing stiff, nothing forced. Hers is the sequential, concrete language that other much-read contemporary poets also prefer over the disjointed and often unfathomable discourse that’s still fashionable for some poets. She herself quotes the straightforward Richard Wilbur and Harvey Shapiro, and also the Leonard Cohen of the love poems. Brackenbury may bring to mind the currently much-praised Louise Glück in her outspokenness, fearless in tackling difficult topics. But make no mistake; Brackenbury’s is her own less strident voice, no one else’s. And she can be wry or very funny, for example in “The Other Alphabet” about her childhood obsession with the never-revealed “letters that are in exile from the alphabet, squatting in camps on the borders of language.”

Brackenbury’s fine but astringent descriptions, like her title (alluded to in the book’s handsome cover), point to painting. She suggests or even explicitly invokes this in many of her poems, especially “At L’Estaque” (missing in the Table of Contents) evoking Cézanne, and “Writing and Painting, Dorset,” where her brother is the painter.   One can easily imagine Brackenbury herself carrying a camera or a sketchbook, or, who knows, having a whole studio full of paints and photographs. Could we imagine that she writes standing at an easel? Indeed, her scenes are so graphic, one can think of them as paintings or photographs. The book’s very first poem is of the camera shot of her parents’ wartime marriage, followed by a second snapshot taken of her as babe in arms. She evokes the movies, too; she uses “The African Queen” for love’s story, and “Hair” contrasts Yul Brynner’s skinhead style with the long locks of patchouli lovers. The tour boats ‘Jean Gabin’ and ‘Jeanne Moreau’ carry “Poem Afloat” down the Seine. Led Zeppelin’s later lead guitarist plays stoned at the “Birthday Party, 1960,” and the Rolling Stones’ “Get Off My Cloud” fills the “Red Helicopter” over Key West. Yet of course it is her words that show her masterly skill with descriptive language, which she handles so beautifully.

She starts her book in England, and her poems sometimes return to Britain. But because Rosalind Brackenbury has lived in the Conch Republic for decades, lots of the poems evoke the hominess, the house-worn presence, the home-grown local fauna and flora of Key West. These are followed by visits to other places—“Australia,” “Moroccan Carpet,” “In the Conscious Hotel, Amsterdam”–and on to Paris and finally the South of France. The concluding, eponymous “Bonnard’s Dog,” fixes forever, or so at least we can hope as long as paint and print survive, that small brown dog staring out at us: “Look, I am here.   A dog’s life is short. This dog’s life is forever.” So would we wish for her, and, since that’s impossible, for her wonder-working words.

Malcolm Willison is a published poet, a manuscript editor in history and social sciences, dividing time between Key West and the Northeast.