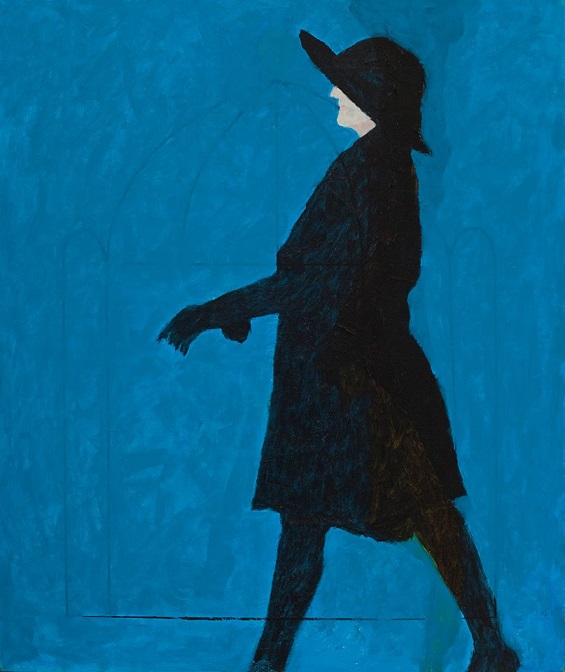 Southard Street’s strenuous repaving was going full-blast last Monday night. But the Gildea Gallery on Southard just off Duval had a packed show opening anyway that night for paintings by three artists new to the Gildea’s on-going presentation to Key West of the most contemporary of American modern art.

Darren Jones’ first exhibit at the Gildea Gallery takes iconic Key West experiences we all have had to form his compelling pastiches, a new departure for him. Each comes with an amusingly ironic title— “ Flotsam & Jetsam,“ “New World,“ “Sunstorm,” ”Canopy,” “Brood,” “Chromosphere,” “Bird Paradise.” The solitary, solid patches of black outline palms, turkey buzzards, fighter planes, fighting roosters and two chicks (one dead), or a street light pole with its power wires and stanchion cables. Each is highlighted on its own explosive splotch of color—orange, aquamarine, green, pink, purple, magenta—against a square white paper background, except for one reproduction on aluminum. The light-pole garnered particular attention and comment.

Suzanne Donazetti’s large panels each covered with a tight mesh of narrow copper stripes also drew much interest. She’s woven shimmering melded strips into curving, sinuous panels, and then overpainted them into blended stretches of pale and subtle aquamarines, blues, saffron, orange, magenta, crimson, and metallic patinas. Each of these has a different color scheme of suggestive, if somewhat unfocussed, import.

The third newcomer at the Gildea was given a broad posthumous review at the gallery. Robert Baras began professional painting only at age 49. A New Yorker with family roots in East Prussia, his distinctive work is displayed at the Gallery with a wide range of subjects and styles, from Cezannesque to Austrian Secessionist, German Expressionism, and French Fauve, to Surrealist, to non-objective Abstract Expression, to evocative suggestions of tropic or pine trees bending together in strong wind. His amazing versatility suggests his long search for an abiding outlook.

Also on exhibit was the Gildea Gallery’s varied collection of the various small molded athletic figures (and a cat or two) in varied colors (now some in streaks and stripes) climbing up their wire ropes. These are by Ancizat Marin, a long-time Gildea favorite. There were also several severely attenuated figures by Todd Andrew Babb. Two figurative oil paintings by Peggy McGivern were hung. And the Gildea displayed a number of interesting figures, including two in Tuscan flesh-and-grey marble, one of these a beautifully compact nude, plus a large clay votive, and several groups of clay figurines, all by local sculptor, Sally Wernikoff.

This Gildea show will continue through most of the month.