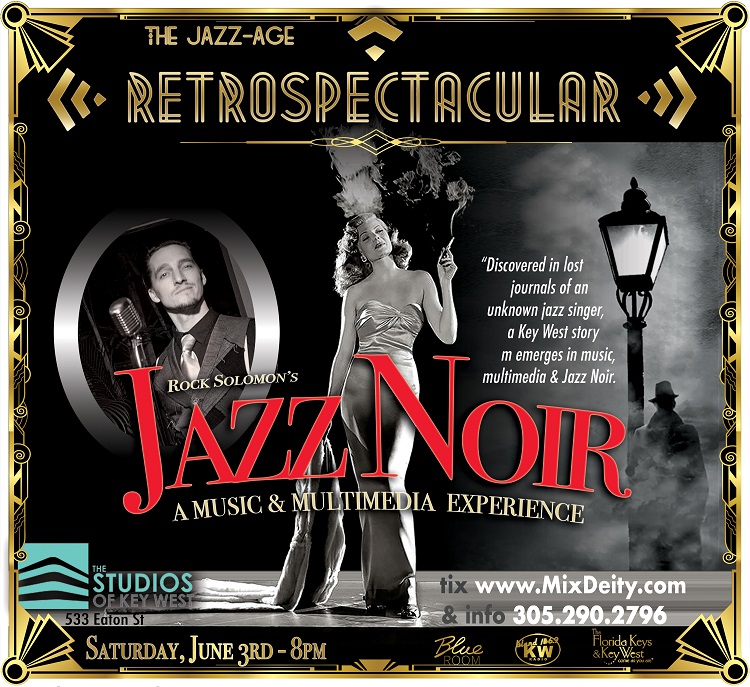 Rock Solomon’s Jazz-Noir multimedia concert is the apex of Jazz-Age Retrospectacular, an out-of-the-box event series looking at Key West history & culture through the lens of the Jazz Age. Solomon and his company, Mixdeity Entertainmen t, combine narrative, music and technology to weave a story of 1930’s Key West, when rum runners were rampant, the economy went bust, and a hurricane like no other nearly sealed the island’s fate. As discovered in lost journals of an unknown jazz singer, this Key West story emerges in music, multimedia & Jazz-Noir styled digital projection.

After being introduced to big band music by his father a Jazz Hall-of-Fame inductee, Rock Solomon studied music directly from his father, gaining a unique perspective and intimate understanding of the jazz big-band genre. As a band leader, musician & vocalist, he gained the rare ability to preserve the musical integrity of the Great American Songbook, while simultaneously bringing refreshing interpretations of the music to new audiences. Now Solomon carries the torch of his legendary family out of its long shadow, emerging as a young crooner with an old soul & unique authenticity in a musical family tradition that is timeless. For more information go online to www.Mixdeity.com or call 305-290-2796 or email info@mixdeity.com

–Season Finale for the Jazz-Age Retrospectacular!–

It just might be the most ambitious costume party of the year. Rock Solomon, is creating a classic car drive-in movie for the season finale of the Jazz-Age Retrospectacular this Sunday, June 4th at the Bottlecap, 1128 Simonton. The event plans to block off a section of the street in front of the Bottle cap and then fill it with classic cars and an outdoor projection screen, creating a pop-up outdoor movie drive-in. The finale also boasts a runway costume contest, photo-party with models, swing dance lessons & a live swing band with special guest vocal talent all night. The event is free & all ages until 11pm, when the late night drink specials kick in for the drink-off/dance-off at the afterparty happy-hour. Want to bring your classic car to the drive in? Want to compete with your costumes, dance skills or photography? Want to learn how to swing dance to a live swing band?