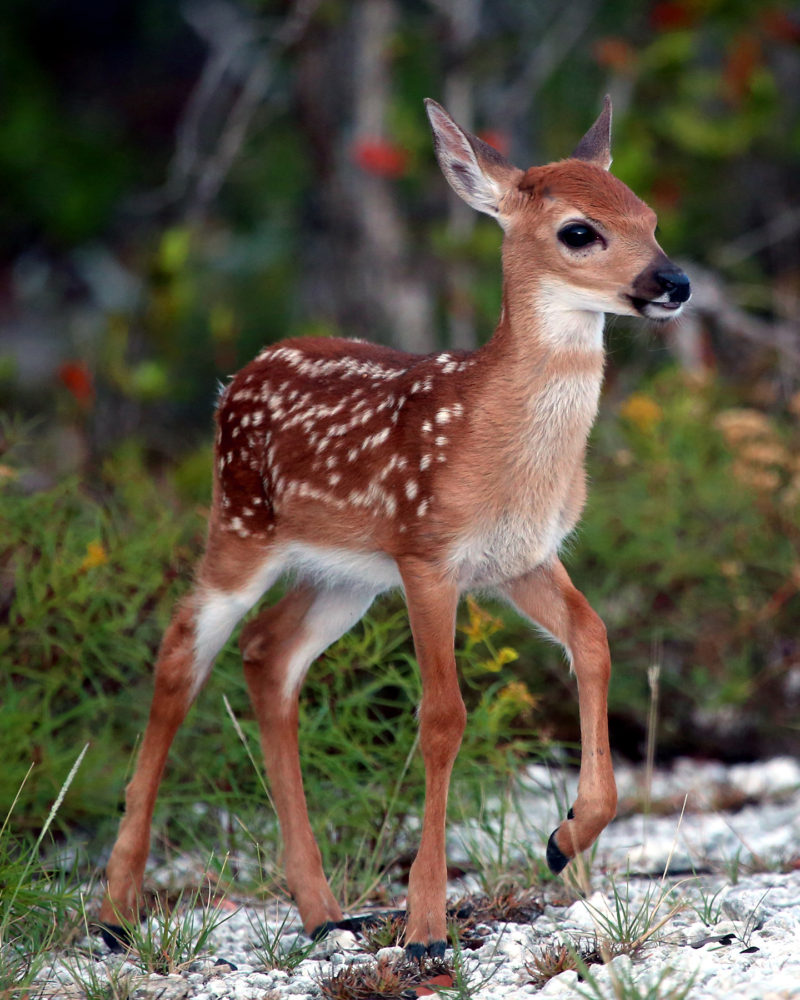 Efforts to protect Key deer from a recent New World screwworm outbreak reached an important milestone this week, surpassing 90 days without a confirmed screwworm-infested animal. The milestone represents a significant reduction in the risk of additional reinfestation of the screwworm, which threatened not just Key deer, listed as endangered under the Endangered Species Act (ESA), but people, wildlife, domesticated animals and livestock. The administration of oral doses to Key deer of anti-parasitic medicine has been stopped following this week’s milestone.

The Key deer is found only in the lower Florida Keys and given its small population size, estimated between 800-1,000 before the screwworm outbreak, the infestation represented a potential extinction event for the deer. When it was first identified in late September 2016, the Service and partners sprang into action training volunteers to treat infested deer, responding to a 24-hour Key deer hotline administered by the Florida Fish and Wildlife Conservation Commission, and intensively partnering with agencies and the local community to eradicate the screwworm.

“Our collective success would not have been possible without the support and active participation of citizens, and diverse agencies working together to solve an urgent challenge,” said Dan Clark, manager at the National Key Deer Refuge. “What was most impressive was not just the level of passion and commitment that people demonstrated for the Key deer but the way so many agencies and interests came together to solve this crisis.”

The Service contributed more than 37 staff to a joint unified command system that included the U.S. Department of Agriculture (USDA), Florida Department of Agriculture and Consumer Services and Monroe County. A proven strategy to rid the lower Keys of fertile screwworm flies was implemented by the team that had been successfully implemented in other Caribbean island-nations and Latin American countries. Over the last six months millions of sterile flies were released twice a week in strategic locations. Since screwworm flies live for just 21 days, can travel over 100 miles and mate only once, the strategy essentially crashes the screwworm population. As an extra precautionary measure, fly releases will continue until April 25, 2017, a full two lifecycles of the fly more than the USDA strategic prescription.

The Service also placed radio-collars on 30 Key deer does (female deer) to routinely locate them and to observe their fawning. The Service also set up numerous remote field cameras to closely monitor individual Key deer for any potential screwworm outbreak. The fawning season, which just began and will continue through the end of the summer, represents an especially vulnerable time for does and fawns for a potential new screwworm outbreak, and biologists have increased monitoring of radio-collared does to daily.

Monroe County officials were impressed by the way that the Service and federal agencies approached the local community at the outset of the eradication effort.

“Federal agencies made a concerted effort to engage the local community very early on in problem solving,” said Marty Senterfitt, Monroe County Emergency Manager. “This not only helped the community feel like they were a part of the solution, it resulted in a more successful eradication effort. We look forward to building on this model of success in future. ”

Citizens and local groups played an important role in helping address the screwworm outbreak, with residents monitoring Key deer and reporting infestations. Over the last six months, more than 140 residents also provided the anti-parasitic medication Doramectin to Key deer in the core population areas. This effort not only helped address an urgent challenge, it expanded public awareness, improved perceptions of the Service’s local and national conservation work, and helped build lasting relationships.

Despite this week’s milestone, there still remains important work to do to conserve Key deer and ensure there are no new screwworm outbreaks.

Ongoing efforts will include:

When Key deer were listed under the ESA in 1967, there were fewer than 50 remaining in the wild. Since that time, diverse ESA-inspired conservation efforts have helped return the deer to sustainable population numbers. To date, the screwworm outbreak has killed a documented 135 Key deer, however, the threat of extinction as a result of this introduced screwworm pest appears to be behind us.

About the National Wildlife Refuge System

The National Wildlife Refuge System protects wildlife and wildlife habitat on more than 150 million acres of land and water from the Caribbean to the Pacific, Maine to Alaska. Refuges also improve human health, provide outdoor recreation, and support local economies. Visit our home page at http://www.fws.gov/refuges.

About U.S. Fish and Wildlife Service