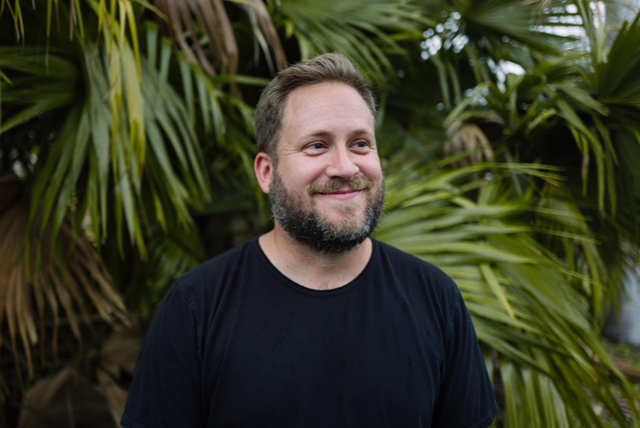 P. Scott Cunningham is a poet, translator, essayist, publisher, and all-around human arts juggernaut from Miami, best known as the creator and director of the O, Miami Poetry Festival, an annual month-long celebration of verse.

Founded in 2011, the mission of the festival is for every single person in Miami-Dade County to encounter a poem during the month of April. The festival has hosted performances by Patti Smith, Richard Blanco, Anne Carson, Raúl Zurita, Thurston Moore, Kevin Young, and many others.

The festival has also promoted poetry in less formal ways, doing such things as hiring a José Martí re-enactor to ride down Calle Ocho on a white horse reciting poems, holding a “Poetry is Dead” parade, and driving a rented red Lamborghini down Ocean Drive in Miami Beach, reciting poems through a bullhorn.

They have also sneaked poems into people’s lives by placing them in urinals, on popsicles, on lawn signs designed to look like political advertisements, on the sides of busses, as well as on the rooftops of buildings in the flight path of Miami International Airport.

As someone quipped at one of his events, “Scott has the soul of a Broadway producer trapped in the body of a poet.”

His poems have appeared in The Awl, Harvard Review, POETRY, The Rumpus, Tupelo Quarterly,  Monocle, RHINO, The Guardian, Electric Literature, and other publications.

His new book of poetry, Ya Te Veo, was selected by former U.S. Poet Laureate Billy Collins for the Miller Williams Poetry Series.

Cunnigham has the words “I will die in Miami in the sun” tattooed in cursive on his arm.

He lives in Miami with his wife, Christina, and his daughter, Ada.

For more information, go to http://friendsofthekeywestlibrary.org and click on lecture series