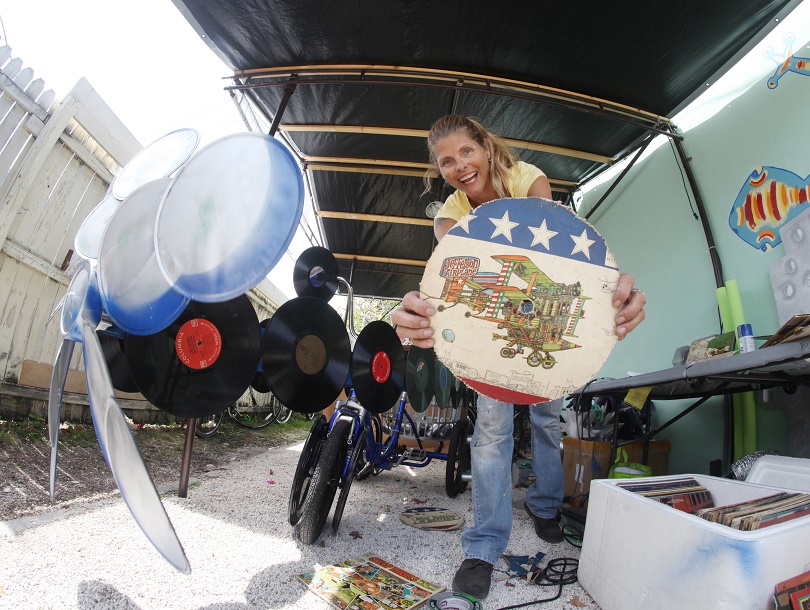 Key West has long been known for its kinetic energy, but on May 6 from 12:00PM-1:00PM, it’s about to become quite literal when the 2nd Annual Papio Kinetic Sculpture Parade rolls through downtown Key West with its cavalcade of art-inspired, human-powered, mobile sculptures and art bikes. The Parade celebrates creativity and innovation while honoring Stanley Papio, a Florida Keys’ pioneering folk artist whose recycled metal sculptures teem with a clever sense of satire, tenacity, and innovation— key ingredients in kinetic parades across the county.

The first Kinetic Sculpture Race rolled down the road in 1969 in Ferndale, California, and later grew to include national cutting-edge race events in Humbolt, Philadelphia, Baltimore, and Port Townshend. Since then, many communities have joined the kinetic craze, offering their own variation of these floats-with-moving-parts-parades. Kinetic-inspired dream machine creators spend months designing and building their sculptures, then must complete a course over terrain that varies from muddy roads to swift-flowing rivers.

Key West Art & Historical Society, steward to the island’s cultural heritage, took the region’s laid-back attitude and rebel ingenuity into account when kicking off its own Parade in May 2016, eliminating the “race” component from the mix but adding the element of “art bikes” for the town known for its pedaling revelers. Arising from a long-percolating idea of former KWAHS staff member Gerri Sidoti, which won the support of a prestigious Knight Arts Challenge—a grant that rewards the best and most innovative ideas in the arts—and the additional support of the Helmerich Trust, the Community Foundation of the Florida Keys, and the Monroe County Tourist Development Council, the Papio Kinetic Sculpture Parade was set in motion. 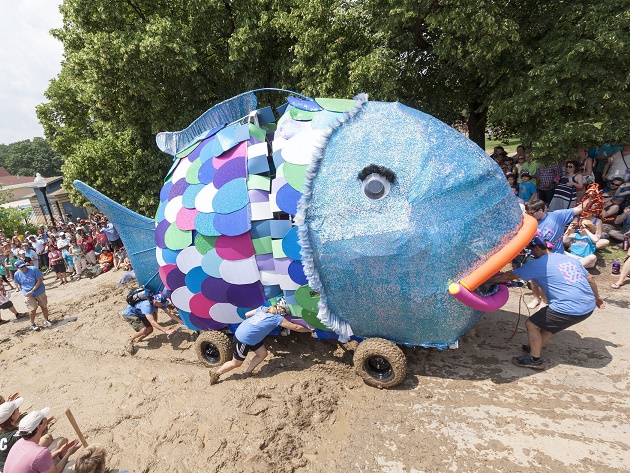 Depending on local geography, kinetic parades and races can include obstacles such as sand dunes, water crossings, and/or a mud course, as seen in this photo of the St. Paul’s School Rainbow Fish taken by Tom Jones at the 2015 Baltimore Kinetic Sculpture Race. (Photo Courtesy Tom Jones)

“As the parade enters its second year, we are excited to see this event grow both in support and participation! We are thrilled to join the ranks of kinetic events around the country in providing engaging, community-focused offerings that merge art, science, history and fun,” says Society Executive Director Michael Gieda.

Last year, more than 30 kinetic creations formed a spectacular display of totally human-powered works of art that traversed the length of historic Duval Street for the inaugural Papio Kinetic Sculpture Parade. Entries included a supersized narwhal that winked at spectators, a pelican whose widespread wings flapped as it towed “parasailing” minnows, a 15-foot-long silver “time machine” made of moving gears and cogs with a futuristically-costumed human pilot, and an eagle ray powered by three bicycling men dressed as remoras.

Along with the May 6 noon-time parade there are a bevy of special accompanying events including a Friday, May 5, 6pm presentation by Baltimore’s “Kinetic Expert” Frank Conlan at the Custom House Museum followed by a porch party reception; a Saturday, May 6 pre-parade children’s “wearable art” workshop with Bria Ansara and 1-3PM post-parade celebration at the Southernmost Beach Café parade finish line with a special live performance by The Legendary JC’s; and a Sunday, May 7th Kinetic Kids & Papio Picnic Day at Fort East Martello from 11:30-4:30, with free museum entry, a Papio exhibit tour at 12:00PM, and an afternoon of mellow revelry for families inside the citadel grounds.

Be sure to show up for the Parade on May 6th or sign up to make your own kinetic sculpture float or art bike today and add to the kinetic frenzy of fun. For registration information, event schedule, entry guidelines and sponsorship information, visit www.papiokineticparade.com. The Papio Kinetic Sculpture Parade is sponsored in part by the Department of State, Division of Cultural Affairs, the Florida Council of the Arts and Culture, and the State of Florida. Additional support provided by the Monroe County Tourist Development Council, Historic Tours of America, Margaritaville Key West Resort & Marina and Southernmost Beach Café. Your Museums. Your Community. It takes an Island.