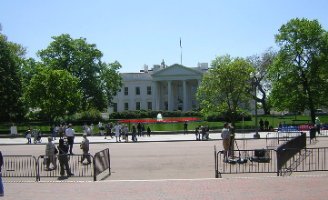 For security reasons, the section of Pennsylvania Avenue in front of the White House is now closed to all vehicular traffic, except government officials. (Photo credit: Wikipedia)

I visited Washington, DC for the first time in 1980. I was 13. Jimmy Carter was the president.

My family only had one day to see the sights. As I remember it, we went through what seemed a somewhat sketchy  neighborhood (I was a country boy, so it may have just been nerves about The Big City), turned onto Pennsylvania Avenue, and drove past the White House and Capitol before taking in selected bits of the Smithsonian and visiting Arlington National Cemetery. Then we proceeded to Andrews Air Force Base, where my brother was stationed, and just for fun drove past Air Force One.

I saw a lot of really neat stuff that day, but right now I’m thinking about the stuff I didn’t see, or at least didn’t notice.

I don’t recall seeing a single police officer anywhere, although I’m sure I must have. The only man with a gun I noticed at Andrews was the gate guard, who checked my brother’s ID and waved us through. Nobody seemed to give us a second glance as we passed within a few hundred feet of the president’s plane. I don’t recall any security checkpoints, barricades or traffic barriers along Pennsylvania Avenue, and I think I would have remembered those.

This was in the middle of the Iran hostage crisis and only a few months after the Unabomber’s attack on American Airlines Flight 444 as it flew into DC from Chicago. Central America was in the throes of successful and unsuccessful revolutions and the US wasn’t terribly popular there. Carter was preparing to re-institute draft registration in response to the Soviet invasion of Afghanistan.

And yet (aside from a surplus of marble monuments), Washington seemed on the whole to be a normal, American city.

When did the East Germans take over?

You can’t drive past the White House on Pennsylvania Avenue today. It was “temporarily” closed to motorized traffic after the Oklahoma City bombing in 1995 and that closure was officially made permanent after 9/11. Seldom a week passes without breathless reports of a “security incident.” Someone touched the White House fence (everyone panic!) or was shot to death by police after making a wrong turn or panicking at a random roadblock. Air Force One? You can still see it. On TV, anyway.

You can still visit Washington, but if you plan to fly in, count on multiple instances of being required to show your papers and get felt up at the airports. My own kids can’t remember a time without metal detectors, bag searches and dire warnings even at the entrances to such attractions as the Gateway Arch in St. Louis.

I guess every generation of adults feels like things have gone downhill since they were kids. But as someone a little too young to have understood Vietnam or Watergate and just exactly old enough to have exuberantly celebrated the  nation’s bicentennial, these days I find each 4th of July to surpass the last as an occasion for mourning an America that no longer exists.