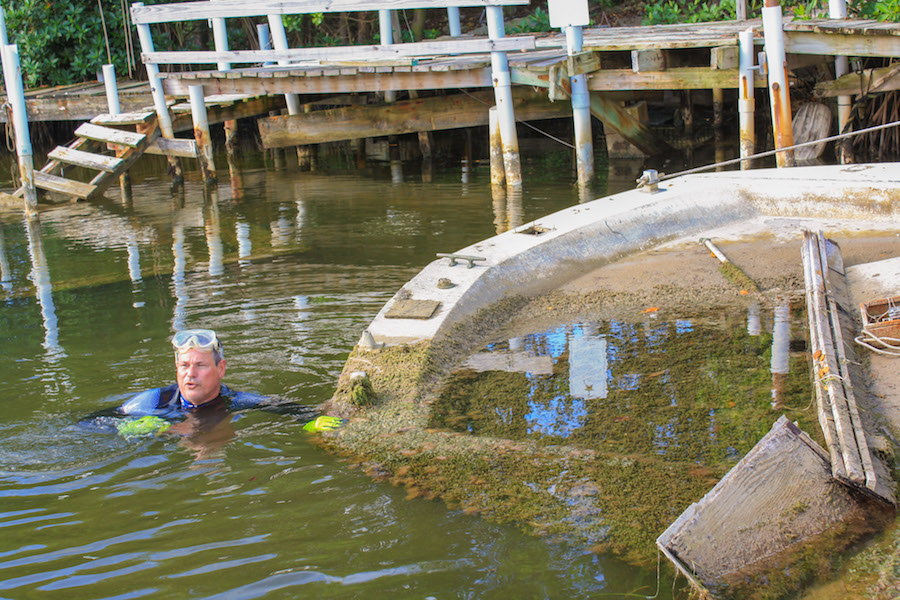 NORTH KEY LARGO – The sunken derelict vessels, unpermitted structures and tons of trash and debris that accumulated for decades on a private 22-acre property along Card Sound Road in North Key Largo are now gone. Monroe County Code Compliance oversaw the massive cleanup of the land and waterway that once was part of the “Historic Fishing Village of Card Sound” but had become an environmental mess and safety hazard.

“It definitely was not the usual code enforcement case,” said Lisette Cutie, Monroe County’s Code Compliance Supervisor for the Upper Keys. “First, we had to get rid of squatters who had been living there for years. We also worked with the property owner. She inherited the big mess from her mother, who had no knowledge of what was happening on her property.”

Case No. CE 14010058 will remain open until there is a resolution for the $4,718.49 in fines and administrative costs that accrued while the property was in noncompliance.

For decades, the property across from Alabama Jack’s bar and restaurant was part of the “Historic Fishing Village of Card Sound,” which included a 1.5-mile stretch along the Miami-Dade County side of Card Sound Road. Shacks and docks, all unpermitted, were built on the remote property. There was a thriving souvenir shop and fishermen eked out a living selling their catch, all part of “Old Florida.”

John and Viola Gautier purchased the property in 1956 and allowed this use of the land without any compensation, according to their daughter Petsy Mezey. After her mother died, Mezey inherited discarded toilets, broken crab traps, hanging wires, rusted pots, decrepit docks, six derelict vessels, a fully sunken boat and a half sunken houseboat. A handful of squatters and commercial fishermen were still living in dilapidated conditions on the property.

“During one inspection trip, I found a man living in a half-sunk houseboat filled with a couple feet of water in the main cabin,” Cutie said.

In late 2012, Cutie notified the squatters that the cleanup was going to happen and they would need to relocate. In early 2014, she officially opened the case. Over the next two years, the expensive cleanup came together with the help of the Florida Fish and Wildlife Conservation Commission and private entities.

Ocean Consulting hired Kearns Construction to remove two of the large dilapidated houseboats and a sunken fishing vessel free of charge to Mezey. They did so as part of a sea grass mitigation project for development of a 10-slip private marina in North Miami. As part of the deal, Ocean Consulting will monitor the site for up to five years to ensure sea grass grows back.

Removal of the remaining vessels, piers, trash and debris was spearheaded by Fred Baddour of CRB Geological and Environmental Services and Joe Weatherby of Artificial Reefs International Preservation Trust. They also did so for free for Mezey, enlisting the help of many volunteers to remove truckloads of junk over several weekends. The Monroe County Sheriff’s Office and its volunteers also conducted cleanup operations on the site.

“We removed mostly crumbled up shacks, wood with nails sticking out, which were all over the mangroves,” Weatherby said. “We didn’t find any hazardous material.”

The original crab shack was allowed to remain due to its historic significance, Cutie said. Baddour’s group added new landscaping.

After the cleanup was completed in late August, Mezey donated the land to the non-profit Artificial Reefs International Preservation Trust. It will become part of the new “John Gautier Aquatic Preserve” to honor her father.

Mezey also donated another 158 acres of mostly submerged land dominated by seagrass and mangroves for the Aquatic Preserve, which is located in Monroe and Miami-Dade counties, and near the Florida Keys National Marine Sanctuary, the Biscayne National Park and the Crocodile Lake National Wildlife Refuge. It is prime habitat for birds, fish, crabs, shrimp manatees and crocodiles all found in Little Card Sound.