First, the “good news” for women: feeling guilty is not a sign of guilt but a sign of innocence, victimhood even. So says Devorah Baum in her Guardian article “Why do we feel so guilty all the time?” The bad news? Females must figure out how to forgive themselves for wrongs they have not committed to release their “money blocks and live a first-class life.” That last bit is Baum quoting from Denise Duffield-Thomas’ self-help tome Get Rich, Lucky Bitch! DDT believes guilt is “one of the most common feelings women suffer” and that “guilty women, lured by guilt to obstructing their own paths to increased wealth, power, prestige, and happiness, just can’t seem to take advantage of their advantages.” (Baum’s piece caught my attention because just the other night my wife Kalo was talking about some things she felt bad about.) 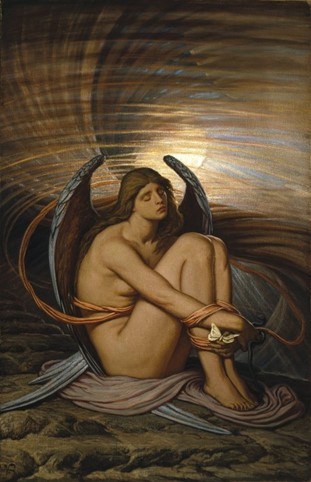 Why didn’t I buy that lottery ticket? Why?!

Imagine that: a first-class life. This sort of advice, which frames guilt as our most fundamentally inhibiting emotion, takes insights from psychoanalytic and feminist thinking and transforms them into the language of business motivation. The promise is that our guilt can be expiated by making money.

Baum then notes that in German guilt and debt are the same word: schuld. She mentions Max Weber’s thesis that “what you earn in this world also serves as a measure of your spiritual virtue, since it depends on your capacity for hard work, discipline and self-denial.” DDT believes that the “salvation anxiety” produced by this perspective increases guilt rather than allaying it.

From there, Baum turns to an interesting discussion of guilt far above my eruditability. She wonders, among other things, whether our guilt comes from our presumption of knowledge, “our desperate need to be sure of ourselves [so that] when we feel guilty we at least have the comfort of being certain about something—of knowing, finally, the right way to feel, which is bad.” Is this why we like crime dramas, she asks, because “they satisfy our wish for certainty?” If you believe the narrator of the novel Magpie Murders, the answer would be yes:

Whodunnits are all about truths: nothing more, nothing less. In a world full of uncertainties, is it not inherently satisfying to come to the last page with every i dotted and t crossed? The stories mimic our experience of the world. We are surrounded by tensions and ambiguities, which we spend half our life trying to resolve, and we’ll probably be on our own deathbed when we reach that moment when everything makes sense. Just about every whodunnit provides that pleasure. It is the reason for their existence.

I’m not convinced that guilt can be erased by earning more, although I would not object if Kalo decided to try out that theory. I’m also not sure that reading or watching crime dramas lowers our GQ (guilt quotient) by assuring us that the world’s moral compass still points in the right direction and that villains, whatever their shape or form or deed, are caught and, if not killed outright, taken off to receive their just dessert. I’m not sure as well that we need this kind of crutch to feel less responsible for things we can and can’t control. If we need a sense of certainty to assuage or at least take our minds off guilt, we have two things we can always rely on. One is taxes. The other…well, you know what it is.

Image: Soul in Bondage by Elihu Vedder, created between 1891 and 1892. Public domain.