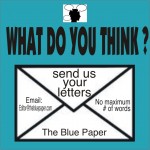 If the subject of global warming/climate change and the reactions it elicits are any indication of the subject’s incendiary nature, I guess we can add that to the things to never discuss at a dinner party; Politics, Religion and Climate Change. Actually there is very little that remains to discuss that hasn’t been painted with the left/right political brush now that weather has been politicized to the point of paralysis. What used to be considered harmless conversation is now a minefield of highly charged emotional disagreement.

I’m not really sure when this lack of civility and intolerance of differing opinions began, but I’m guessing it started with the introduction of the misguided concept of twenty-four hour “news” programming coupled with Rupert Murdoch’s vile style of confrontational, agenda driven talking heads. Rupert legitimized and elevated rudeness to new heights with nicely dressed, good looking people in the studio screaming over each other to make some point or another that got lost in all the excitement. Mainstreaming crass behavior worked! Viewers liked a good fight on the telly and if the “news” validated their preconceptions, well, all the better.

Before Rupert Murdoch’s FOX News began in 1996 the only place on television you could view people in suits shouting at/over each other was The McLaughlin Group on PBS. The show premiered 1982 and is still going strong and John McLaughlin, though long in the tooth, is still yelling with the best of them. At least The McLaughlin people attempt to stay on point and state pros and cons, however on FOX, along with teaching America extremely bad manners, there is no room for pro/con discourse, only corporate party line and plutocratic dogma will do. War is good, peace is for sissies, Obama is Satan and, of course, Global Warming is a leftist hoax.

Rupert’s lessons in rudeness and intolerance go hand-in-glove with our delusional state of “American Exceptional-ism” that in turn aligns with the Big Oil/Christian “Dominion-Over-All-Things” which ironically dovetails nicely into Ayn Rand-ian infantile narcissism. Thanks, Rupert. I miss Walter Cronkite and the Indian-head test pattern.