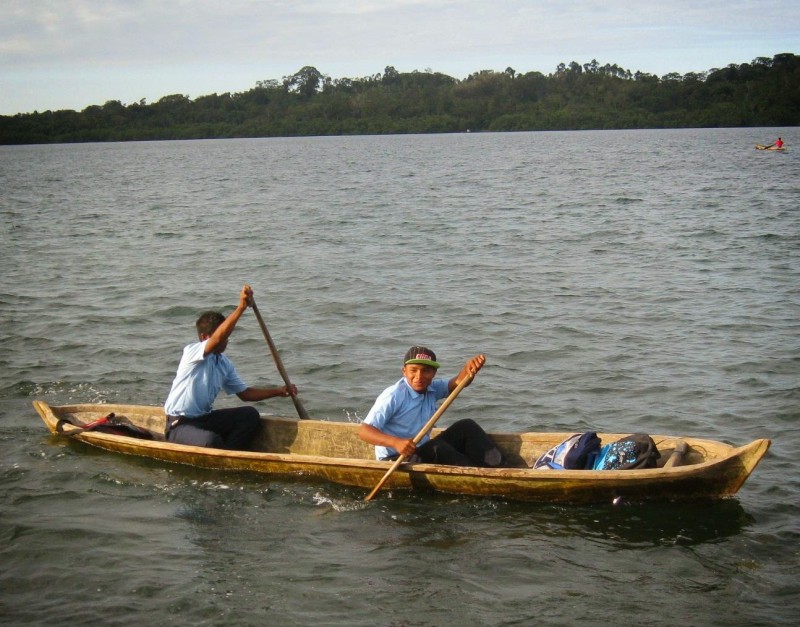 By Ray Jason, The Gypsy Philospher…

It was a lovely sight in a glorious setting. In one direction the primal jungle spilled down the hillsides to the sea. And in the opposite direction it swept up the mountainsides until it was replaced by evergreen forest as it neared the slumbering volcano. In the foreground a small armada of cayucos was departing the tiny village as the Indio children paddled home from school. Their joyous chatter and laughter as they propelled themselves effortlessly across the water was echoed in the sky by the wild parrots that never seem to fly without gossiping enthusiastically.

This tableau perfectly symbolized the upside-down sense of superiority that the First World lords over the Developing World. At this exact moment in thousands of towns in El Norte, the soccer moms were waiting in long lines for school to let out. They were en-bubbled in their massive, air-conditioned SUVs about to safely transport their children home. They need these steel security pods because their “advanced Civilization” has become so perverse that human predators make it dangerous for children to walk or bike to school, like I used to do.

AVENTURA is anchored about a mile away from the primitive schoolhouse, and I rowed over to a little store to idle away some time with a local character. He has sampled both worlds and after a long stint in the theme park ghetto of central Florida, he returned to the Banana Latitudes and this no-tech, authentic paradise. I wanted to talk to him about the “road rumors” that I had been hearing. I have great affection for these gentle, self-reliant people and I fear the impact that a road to the outside world would have on their slow and almost timeless lives.

Currently, if they want to visit a nearby town it is beyond paddling range, so a group of them will go in one of the bigger cayucos powered by an outboard engine. I often see them arriving with heavy bags of cacao beans that they sell at the chocolate co-op. Later in the day they will return to their little homesteads with huge bags of rice. Seeing this, I always chuckle at the notion of a suburban housewife or husband hoisting a 50 pound bag of rice on their shoulder.

During the hours after they sell their chocolate beans and before they buy their rice, they wander about the town like strangers in a strange land. They know that they are supposed to be excited by the noisy frenzy and by all of the strange stuff that is for sale. But what I see in their eyes is not enjoyment – but a distinct ‘deer in the headlights” anxiety. They can’t wait to get back to their little hand-built houses and their chickens and wood fires.

My distress over the possibility of this single road disturbing the serenity of this “land that escaped progress,” was amplified the next day. That’s because I read that at the latest G20 meeting in November of 2014, some of the most powerful people in the world, who were desperate to find a way to jump-start the smoke and mirrors global economy, had concocted an enormous infrastructure initiative.

In the next 15 years they plan to devote $60 to $70 TRILLION towards worldwide construction projects. And what particularly disturbed me was their desire to construct 25 million kilometers of new paved road by 2050. This is enough to circle the Equator 600 times. Naturally, the vast majority of these roads would be in “developing” countries with many of them routed through extremely fragile ecosystems.

The representatives at the G20 meetings are from the most powerful nations in the world; and they are supposed to be “the smartest people in the room.” And yet they fail to perceive that the “ROOM” that they dominate – which is Planet Earth – is swiftly becoming uninhabitable for humans and most other large, complex animals.

My belief is that these Gatekeepers suffer from “complexity bias.” They shield themselves from simple and obvious truths by claiming that important issues are so complex that they can only be handled by experts.

But anybody with basic common sense realizes that the dominant global economic system of “un-fettered Capitalism” is catastrophically destructive to the living planet and its creatures. And it causes obscene wealth disparities whereby a tiny minority lives in Byzantine opulence while billions of people struggle to just avoid starvation. And any common sense analyst also realizes that an unrestrained economic system is suicidal since it eventually uses up its vital resources. Plus, it simultaneously creates steaming, putrid mountains of toxic waste.

The G20 leaders, who are attempting to unleash this new round of gargantuan development, are definitely aware of this. Although it is surely debatable whether they are the smartest people in the room, it is indisputable that they are some of the most ruthless people anywhere. Indeed, that’s how they got into the room – and locked the door behind themselves. Even though the current paradigm is doomed, they still try to sustain it because it enriches them so gloriously. That’s why I call these people The Malignant Overlords.

But too much focus on these greedy, immoral rulers when I am enfolded in such an idyllic setting is so troubling that my thoughts return to the gentle Indios paddling past AVENTURA. They are so blissfully disconnected from “The Grid,” that they don’t even know what it is.

And so, as the G20 “leaders” continue to asphalt the Earth, I ponder the unnecessary and harmful road that they want to bring to this tiny, un-violated outpost. It is a perfect example of most of the other “links to the modern world” that are forced on self-sufficient, culturally-intact villages.

The people promoting these roads do not care about human or planetary betterment. They are addicted to wealth and power. They only seek greater riches and tighter control. One should view their bulldozers as if they were GUNBOATS imposing the will of the powerful on the lives of the dispossessed. These Malignant Overlords, with their infrastructure projects and especially with their roads, must be resisted as completely as possible. They do not respond to ethics or reason – they only heed PUSH-BACK!

Once the rulers have gained a foothold they destroy the integrity of the village or the tribe. I know of zero examples of communities that have fallen for the seductions of Progress voluntarily or had it imposed through force, who ever regained their former way of life that revolved around simplicity and authenticity.

I realize that the Indios that I am amongst are what I refer to as “fringe indigenous.” They are not like a Papua New Guinean or Amazonian tribe that has never been exposed to the White Man’s World. But amazingly, they have managed to flourish as a parallel society that only rarely has to intersect with the Real World.

And so my hope is that in that little school-house there are some teachers courageous enough to convince these children that their life here in this tranquil lagoon is exquisite and beautiful. And perhaps they can inspire those youngsters to valiantly defend this treasure – or risk losing it…forever!