In honor, I’m assuming, of the twentieth anniversary of the debut of Harry Potter and the Philosopher’s Stone, the publishing website Reedsy posted an article on June 27 featuring a cartoon where Dumbledore gravely tells the young wizlet, “Harry, the results are in. You are a HORCRUX.” The article, titled “Learn What Irony (Really) Is and How to Use It,” explains that most of us know what irony is when we see it “but few of us can articulate it without relying on half-remembered lyrics from the 1995 Alanis Morissette song ‘Ironic.’” As the reason for their exploration of incongruity, the authors assert that “it’s critical for writers to understand irony.”

To begin, they unironically define the concept as “a storytelling tool used to create contrast between how seem things seem and how they really are beneath the surface.” Next, they helpfully explain the differences between dramatic irony, situational irony, and verbal irony and provide a “How Well Do You Know Irony?” quiz at the end. This “Perfecting Your Craft” article is long, but I learned from it (don’t be so shocked) all the while enjoying the fun examples thrown in from Friends, Touch of Evil, and The Hobbit, to name three. 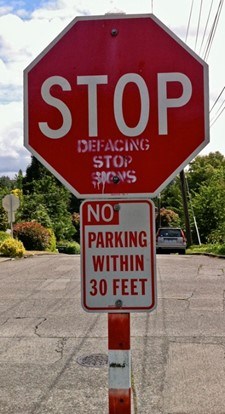 No need for me to go into the writerly details here (I heard that big sigh of relief!) because, sadly, despite what Carly Simon tells me, somebody does it better (well, when I think about it, which I try not to, nearly everyone does it better). Instead I will bore down a little into the origin of the word. In ancient Greek (“eironeia”) and Latin (“ironia”), irony means “feigned ignorance” or “dissimulation.” Breaking down the first combination, we get “to simulate the quality or state of being ignorant falsely.” In its harshest interpretation, being ignorant is—and I love this phrase—being “destitute of knowledge.” The word “dissimulation” has a different bent. It means “the act of dissembling” or “the fact of being dissembled.” The verb dissembling is “to hide under a false appearance” or “conceal with intent to deceive.”

This all points to another type of irony not mentioned in the Reedsy piece. Let’s call it “polirony” [pah `lie rah knee]. The term is useful today (and would have been dating back to the birth of democracy undoubtedly) because most politicians learn one cardinal rule early: it is certain death to ever say or write what they really think or mean. Almost to a man and woman, they are “polironists” and this, believe it or not, may throw some better light on understanding our president and perhaps (this is a big perhaps!) have greater sympathy for and/or empathy with him. Think of Donald J. Trump as the world’s penultimate polironist. Since, in that role, he will never say what he really thinks or means, all his tweets become snippets of hidden communication that need to be deciphered.

Rest assured. We won’t have to do this ourselves (as if we [I!] could). Once the news media learns of this, they will create whole new departments and hire former CIA codebreakers to give us the real scoop on DJT tweets. MSNBC, for example, will rush to replace “Deadline: White House” with “The Tweet, the Whole Tweet, and Nothing but the Tweet.” I hope they do this soon. I’m really looking forward to it.

Photo Credit: A stop sign ironically defaced with a plea not to deface stop signs. By Scheinwerfermann – Own work, CC BY-SA 3.0, https://commons.wikimedia.org/w/index.php?curid=17282660.