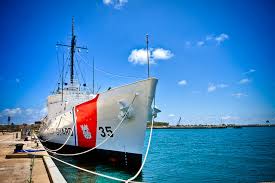 Celebrating a 75th birthday is reason for a major celebration, and Florida’s oldest, continuously operating professional theater, the Key West Players, are celebrating in style aboard the USCGC Ingham on Feb. 8, 5 till 8 p.m.

Key West Players, also known as the Waterfront Playhouse, was born Feb. 2, 1940, with only seven core members, military and civilian. It the early days they performed in various venues, including the U.S.S. Gilmore and the Harris School. In 1944 the Players converted the former carriage house behind the Key West Woman’s Club on Duval Street into a playhouse — the building now acclaimed as the island’s Red Barn Theatre. It wasn’t until 1961 that the Players moved into their lasting home, an old warehouse adjacent to what is now known as Mallory Square, and became known as the Waterfront Playhouse.

Celebrating 75 years, the Key West Players/Waterfront Playhouse has joined with the USCGC Ingham Memorial Museum for a sunset party aboard ship. The Ingham, built in 1936, also has a long history. In 1940 she was assigned to patrol the Atlantic and defended our nation’s shores during WW II. Together, Key West Players and the USCGC Ingham bring you an elegant and memorable celebration.

Come and enjoy the unique, casual atmosphere of being aboard a military ship. Imagine what it must have been like in the early days of the theater when the Key West Players performed for the Navy aboard the U.S.S. Gilmore. A small history exhibit with pictures of the U.S.S. Gilmore will be available for viewing at the party.

Enjoy a beautiful view of the Key West sunset from the deck of the ship. The Ingham is permanently tied up at the Truman Waterfront harbor, where there is plenty of free parking. Tickets are only $40 and include: an open bar with quality spirits, beer and wine; a buffet with cold cut sandwiches, light cocktail party snacks and birthday cake; and, last but certainly not least, music by the very popular steel drum band called Niceness, led by Bongo D. After sunset, relax or dance under the stars.

Raffle tickets will also be available for purchase, for a chance to win prizes to top off this tropical evening. Waterfront Playhouse thanks in advance all those who support the performing arts in Key West. Purchase tickets online or call the box office: https://www.waterfrontplayhouse.org/ or 305-294-5015.