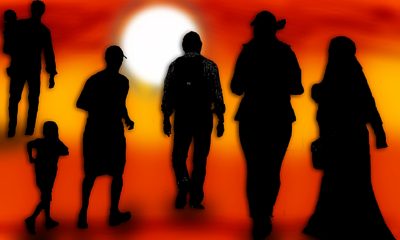 Presidents Obama, Bush, Clinton and Reagan had 32 (thirty-two) years to competently address the “disastrous debacle” that has devolved into our nation’s present immigration policy. All of these politicians with their extravagantly paid consultants, advisers and experts specializing in the field of immigration law; failed miserably.

Thousands of elected members to congress, along with their extensive and excessively compensated staffers, sat idly by as the immigration crisis worsened; exacerbating the pain and suffering of millions seeking safety, food and shelter for their children and loved ones. The same reasons why my family immigrated to America. My great, great grand uncles were hung to death by their British overlord for stealing a fish from his lake to feed their families. The Irish people were made slaves and starved to death in their own country by the British Crown. Formation of the IRA (Irish Republican Army) was in response to the barbarity and murder perpetrated upon innocent Irish children and families by the British.

Clawing their way to escape the brutality of English rule, they were greeted by their newfound American countrymen with signs declaring: “No Irish, No Blacks, No Dogs”. And of course the standard bearer of welcomes: “No Irish Need Apply”.

Sheriff Rick Ramsay has delivered distinguished and courageous service to the citizens of Monroe County for over 30 years. Throughout his tenure as Sheriff I’ve met with him and discussed the delicate issues of Race, Bias, and Equality under the Law. He’s never shied away from these types of conversations, welcoming Pastors from locations where these issues are relevant to meet with him, as they voiced their concerns.

On the firing line of life, where the rubber meets the road, Sheriff Ramsay’s integrity, impartiality and commitment to “equal justice under the law”; are firmly established and intact. All of the African-American and Hispanic-American families I work with voted for and support him. They’ve reached out and welcomed Rick into their homes, sharing comfortably with him their experiences and the situations they face.

Sheriff Ramsay has had “no part” in creating the charade that masquerades as our immigration policy. Rather than taking a hard stance on this issue, as legal interpretations and understandings continue to shift; his measured and deliberative approach calls upon his deputies to use “discretion” when interacting with individuals whose legal status may be in question.

“Discretion” is an emphatic trust in your deputies to behave appropriately and legally when enforcing the law. How can “discretion” be denied the officers that are ordered into harm’s way, while protecting the public they serve. If discretion is not entrusted to these “officers of the law”, they must be taken off the street and put at a desk job,  where they can be closely monitored and supervised during their shifts, for fear that they may behave imperfectly.

There are compelling and distinct differences when it comes to interpreting and reacting to the flaws embodied in our present immigration laws and policies.

Naja and Arnaud Girard in their “Blue Paper” have brilliantly detailed their concerns, with reason and legal standing as a backdrop. They’ve intelligently proffered their beliefs identifying what they assess to be inappropriate conduct and possible violations of the law, based on videos depicting Sheriffs’ Deputies detaining and questioning individuals during a traffic stop, when the individuals involved appear to be undocumented aliens.

Confusion in Key West seems to exist between the city’s police force and county law-enforcement, when it comes to the handling of undocumented aliens. Is there only “one way” that “officers of the law” must address this issue. I find that hard to believe, as our immigration policy as it stands, is riddled with flaws, uncertainties and a variety of interpretations and understandings, as to the “standard operating procedure” to be followed when engaging such individuals.

Sheriff Ramsay has “articulated his policy” when it comes to detaining a person whose legal status has yet to be determined. It has been identified as the use of  “Deputy Discretion”.

On 6/19/17 more than (40) undocumented MS-13 gang members were arrested in a suburb of New York City. The motto of MS-13 is: “Mata, roba, viola, controla” (Kill, steal, rape, control). According to the FBI and Treasury Department more than 10,000 of these ruthless murderers have slipped into our country undetected via our porous borders.

Any person of conscience is troubled by the suffering of another. Particularly, when in their eyes the cause of their discomfort may be “unnecessary and disproportionally dispensed”. I know many children and families that have been destroyed because of misinterpretations of the law, and the subsequent mistaken actions taken by Homeland Security. Vague, ambiguous and contradictory statements by those responsible for setting our immigration policies continue to be enunciated. I’ve not witnessed such ineptitude and incompetence by our government, in a very long time. Could it be by design?

Some members of my family are living in fear, as they scurry about trying to protect a hard working and law-abiding father of (5) from arrest and deportation.  Everything costs money for this beautiful, yet fiscally insolvent family, as they seek answers and direction in protecting the head of their household from imprisonment. They’ve received contradictory counsel and paradoxical advice, as they search for a way to bring themselves into agreement with whatever interpretations, processes or enforcement directives are required by Homeland Security; today.

Chronic deviations, executive orders and the emergence of new immigration rules, legal status requirements and eligibility criterion; have placed an enormous strain on  some extraordinary individuals, who just like so many others fled starvation, enslavement and murder, for a better way of life.

The real crime is that our government via its presidents, congressional leaders and bureaucrats; created a convoluted and confusing legal environment by choosing not to enforce our immigration laws. Through their inaction, a welcoming signal was given to those desperately seeking relief from adverse circumstances. These illegal/undocumented aliens were given hope and encouraged to enter our country via the negligent actions of our government.

Now, after generations of working and building this nation, are these children and families to be discarded as trash. Shall they be deposited into internment camps or prisons? Or, shall their families be torn apart, as selected members are forcibly removed and returned to the hell-holes from whence they came?

Perhaps it’s fitting for the federal authorities responsible for creating this mess to suffer punitive consequences for their negligence and malfeasance. Maybe they can be rounded up and exploited before being sent to prison.

Sheriff Ramsay is not where the problem lies. He cannot undo the 32 years of federal  indifference and carelessness, which constitutes our dubious and erratic stance on immigration.

A lot of harm, injury and killing has been inflicted upon innocent American citizens by illegal/undocumented aliens. The undocumented immigrant population has also been maligned, mistreated and abused. Besides those profiting from an illegal underground, there aren’t any winners.

Forming an authentic delegation of solutions oriented individuals, capable of concisely presenting their formulas for success, as it relates to developing a humane and enforceable immigration policy; might afford a starting point for creating a meaningful instrument of reform. Upon construction of this document I would be willing to fly to DC and present the finished product to President Trump and General Kelley. I’m certain they would welcome our effort to advance a solution, before the toxicity of our immigration policies metastasizes into a fatal malady, forever extinguishing the “Dream that was once America”.

Meanwhile, until a structurally sound and consistently applied immigration law is developed and made available at the federal level; perhaps there’s room for an accommodation or addendum to be appropriated, when detaining and questioning an individual about their legal status. Maybe a protocol of sorts, which safeguards and protects the “constitutional rights” of both deputy and detainee. With his fingers on the pulse of Monroe County, I’m certain Sheriff Ramsay is honed in on all the nuances correlated with illegal and undocumented immigration. His credibility, judgment and integrity thus far have been beyond reproach.

Hitherto, the individuals portrayed in “The Blue Paper” have all been sympathetic characters. I would not want a young baby faced MS-13 gang member that’s a rapist and murderer released from custody, because he played cutesy with law-enforcement. Drawing a line between securing a real threat to the community and releasing an innocuous undocumented person; is a difficult and dangerous task, riddled with  unintended consequences.

Sheriff Rick Ramsay and “The Blue Paper” Editors Naja & Arnaud Girard are extraordinarily skilled and gifted professionals. Rarely have I been privileged to be in the company of accomplished individuals, possessing such magnitude and magnanimity. People of their “Caliber” are few and far between.

Working and pulling together for the benefit of each other, our community and nation; are objectives within reach. They can be secured, accomplished and built upon.

“We must, indeed, all hang together, or most assuredly we shall all hang separately.” Benjamin Franklin, just before signing the Declaration of Independence, 1776.