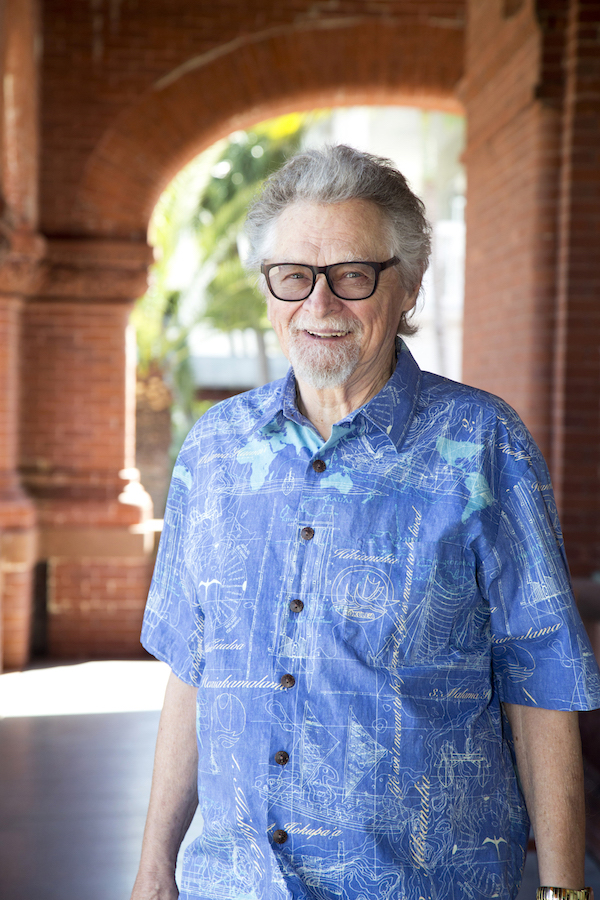 Key West Art & Historical Society will present author and historian Brewster Chamberlin with the 2018 Scotti Merrill Preservation Award at the 2018 Back in Time gala on December 5. The award recognizes an individual who has dedicated him or herself to preserving the cultural heritage of the Florida Keys, with special emphasis on the Custom House.

Brewster Chamberlin loves stories, especially those plucked from aged papers and weathered letters that need detective-like consideration. For the last decade, he has been volunteering his talents as a research associate and archivist for Key West Art & Historical Society, helping inventory, catalogue, understand, and preserve the artistic heritage of the island.  The Society is honored to announce Chamberlin as this year’s Scotti Merrill Preservation Award recipient and will celebrate him at their annual “Back In Time” fundraiser on Wednesday, December 5 from 5:00pm – 10:00pm, a festive, themed costume event that supports the building’s ongoing preservation needs.

“The Society is indebted to Brewster for his work as the organization’s archivist over the last decade and a half,” says Executive Director Michael Gieda. “His duties have greatly benefitted the Society and its mission of preserving the cultural heritage of the Florida Keys.”

The Scotti Merrill Preservation Award honors those who dedicate themselves to preserving the cultural heritage of the Florida Keys, with special emphasis on the Custom House, a building that underwent a 9-year, 9-million-dollar renovation spearheaded by Merrill, the late philanthropist and founder of the Dogwood Foundation.

“This is the cultural heritage of the island of Key West,” says Chamberlin, pointing to several boxes lining the top of a shelf during a recent interview at the Custom House Museum. “The materials go back to 1828, when the first settlers arrived.  It’s all here at the Custom House.”

Born in 1939 in Jersey City, New Jersey, Chamberlin has lived in New York, Germany, France, Washington DC, and now Key West with his wife, Lynn-Marie Smith.  His lengthy career as a professor, archivist, author, and historian have gathered him enough accolades, letters, and ephemera to fill many archival boxes of his own.  But his decade-plus efforts at the Society have focused on the Custom House Museum’s collection, most notably of Mario Sanchez and Ernest Hemingway archives, and recently, the creation of an online timeline of Flagler’s railway history.

Seemingly scholarly and demure, a few pointed questions reveal his unbridled passion and commitment to discovering and developing as much of the story as possible. His research comprising of 12 boxes of Sanchez archives helped write the story used in the museum’s Sanchez exhibit.  His book “The Hemingway Logs” began as a 20-page collection of notes meant to help him catalogue the archives at the Custom House Museum and create a chronology of Hemingway’s life and times in Key West, but “after 10 years of research, it ended up a 400-page book” where Chamberlin sets the record straight on what is fact and what is fiction.

“An archivist takes all of the documentary evidence that he or she can find and builds a story,” he says. “You need to read more than the usual sources— a wide expanse of various kinds of sources including obscure letters, biographies, and autobiographies written by secondary characters.”

Chamberlin says the museum’s archives of documents will eventually be photocopied and open to the public, creating a research institute alongside a museum for artwork and artifacts.  In the meantime, the documents must be preserved between archival quality paper within a climate-controlled environment— a mechanical system that will be addressed in the museum’s next phase of restorations, renovations, and upgrades.

“This is the only place that supports this, along with the library that does a bit of it,” says Chamberlin. “There’s nothing like this institution in terms of what it preserves for history.”

Celebrate one of Key West’s human treasures, Brewester Chamberlin, and help preserve the cultural heritage of the Florida Keys, with special emphasis on the Custom House, at the Society’s December 5 “Cruise to the 40s Back in Time” fundraiser. The evening begins with a cocktail hour at the Custom House Museum, the island’s architectural crown jewel located at 281 Front Street, followed by dinner, music, dancing, and all kinds of 1940s-inspired fun at the Margaritaville Resort & Marina. Tickets start at $125 and are available at kwahs.org/event/back-in-time-fundraiser. For more information, visit KWAHS.ORG or contact Event Coordinator Dani Holliday at 305.295.6616 x 114.